The planned Akkuyu nuclear power plant has had its share of problems, but could become a lucrative strategic partnership between Russia and Turkey. 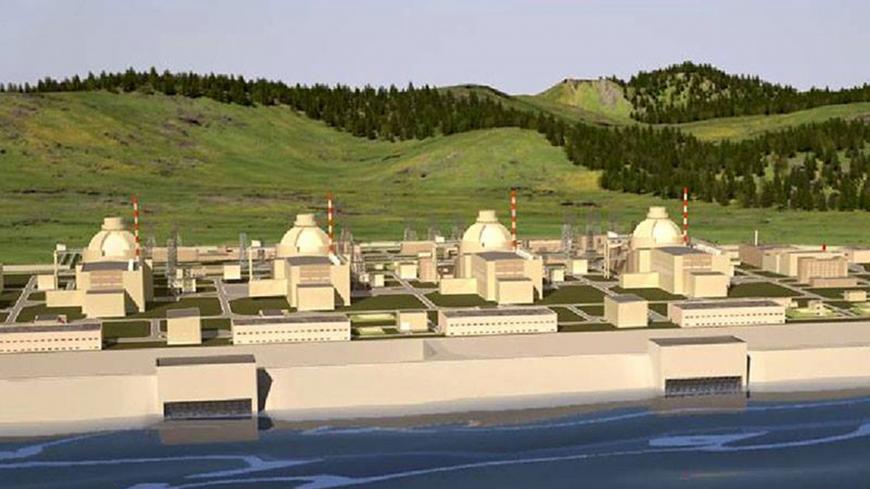 The second groundbreaking ceremony for Turkey's first nuclear power plant is set for April, and this time officials hope to make it stick despite funding difficulties and past delays.

The Akkuyu plant is the largest joint project symbolizing strategic relations between Russia and Turkey. The facility will have a 4,800-megawatt capacity and will cost some $20 billion. Turkish officials still say Akkuyu is scheduled to go into service in 2023 — the centennial of the Turkish Republic — though it is unlikely to meet that schedule.

What makes the Akkuyu project so strategic and important?

“Nuclear energy has a centerpiece place in strategic foreign policy instruments. The Russian contractor of the project, Rosatom, currently has contracts to build 34 nuclear power stations in 12 countries and provide their nuclear fuel,” he told Al-Monitor. “Total contracts it has signed the world over exceed $133 billion. As such, Rosatom today is the leading global contractor in nuclear power station construction.”

The breadth of state-owned Rosatom's involvement gives Russia access to countries it couldn’t reach through oil and natural gas pipelines. Examples include projects in Iran, Egypt and Turkey, and ongoing negotiations with Saudi Arabia.

The plant project will be highly lucrative for Russia. For example, Turkey will buy each kilowatt of electricity from Akkuyu for 12.35 cents, which is two to three times the world average. That price isn't adjusted for inflation and is good for 15 years.

Turkey or Turkish private sector companies are to provide 49% of the financing. While Russia will fully control supervision and management, having Turkey assume half the cost will provide Russia with resounding economic returns. However, a deal to sell 49% of the plant to a Turkish consortium made up of Cengiz Holding and the Kolin and Kalyon construction companies fell through when the latter two backed out. It is obvious the Turkish companies could not reach an agreement with Rosatom on commercial aspects of the project.

Cengiz remains a contractor, but Rosatom is still looking for Turkish investors. There are rumors in Ankara that Turkey’s giant Wealth Fund could become Rosatom’s partner.

“Russia has so far invested some $3 billion in this project and wants to conclude it through sharing the financing load with the Turkish government or Turkish companies,” Has said, adding that Moscow is seeking long-term guarantees. “Russia doesn't want the project to be disrupted … because of political tensions it may have with Turkey or because of growing security risks in the region."

The first groundbreaking for the plant, in April 2015, did not take, as the entire project was halted when Turkey downed a Russian fighter jet near the Syrian border that November.

Despite all efforts to keep the plant separate from politics, Akkuyu has already become an excessively politicized issue, just like Ankara’s proposed purchase of a Russian S-400 missile system.

Turkey is highly dependent on Moscow for the plant's functioning, as Russia will train the personnel and supply nuclear fuel. So even though the Russia-Turkey relationship might not be a true alliance, the countries will definitely become close partners, which will provide Moscow with potent geopolitical benefits.

Russia has built nuclear power stations in China, India, Vietnam and Bangladesh, but unlike those countries, Turkey is a NATO member. Turkey-NATO relations have deteriorated, in part because of the S-400 missile system purchase from Russia, and the Akkuyu nuclear plant is expected to further disrupt relations — which suits Russia.

Russian President Vladimir Putin is expected to visit Turkey’s Mediterranean province of Mersin to attend the groundbreaking, set for the first week of April. Putin’s attendance or absence will carry an important meaning: If he shows up, Moscow still has high hopes for the Akkuyu project; if he doesn’t, doubts still linger.

“Russians will be the losers if they withdraw from a project they have already invested $3 billion in," Has said. "But, if you ask me, there are still myriad ambiguities in Akkuyu's future."