Russians appear to have forgiven Turkey for its jaw-dropping decision two years ago to shoot down a Russian jet, but forgetting is another matter. 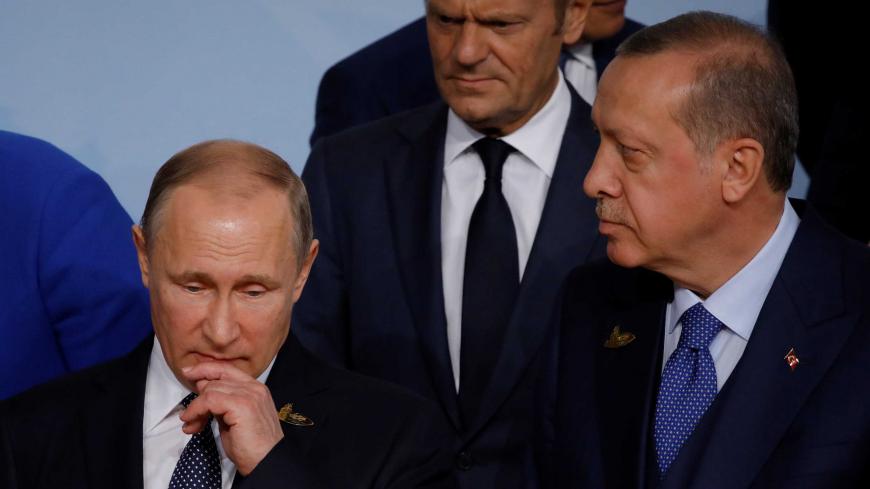 On Dec. 1, Russia finally lifted its ban on imports of Turkish tomatoes completely. This was one of the last sanctions against Turkey that Moscow introduced shortly after Turkey downed a Russian jet Nov. 24, 2015. Two years ago, the incident put Russian-Turkish relations on the brink of collapse, risking a war between the two nations.

Russians were furious with Turkey’s actions. Anti-Turkish demonstrations took place in front of the Turkish Embassy in Moscow and Turkish consulates in Kazan, Stavropol and St. Petersburg. Russian social networks were flooded with harsh criticism of Turkey.

Russian President Vladimir Putin called the incident a "stab in the back" committed by "accomplices of terrorists" and promised the tragic event would have significant consequences for Russian-Turkish relations. Days later, the Russian government imposed bans on charter flights from Russia to Turkey and on imports of certain Turkish goods, including many fruits and vegetables. A number of Turkish organizations and businesses operating in Russia were restricted. Russian companies were banned from hiring Turkish employees. The government also “advised” Russian travel agencies to stop selling tours to Turkish resorts. At the same time, Moscow didn’t refuse to implement large interstate projects such as construction of the first nuclear power plant in Turkey and the Turkish Stream gas pipeline.

Turkish President Recep Tayyip Erdogan didn’t extend an apology until June 2016. Two months later, Putin and Erdogan met for the first time since the incident. Relations between the countries have gradually improved since then. Almost all Russian sanctions have been lifted, with the exception of unilateral visa requirements for Turkish citizens — yet this is also being negotiated.

At a meeting last month with Erdogan in Sochi, Putin said relations between the two countries "have been practically fully restored."

“This is evidenced by the growth of bilateral trade: In the first nine months of this year, it increased by 36%. There is every reason to believe that we will be able to compensate for last year's decline,” he said.

Indeed, Turkish business is coming back to Russia. Business delegations from Turkey are visiting different Russian regions, and some 20 Turkish companies participated in the Russian-Turkish business forum held Nov. 30 to Dec. 1 in the Russian city of Voronezh. The aim of the forum was to revive and strengthen contacts between Turkish and Russian companies, as well as to elaborate on joint investment projects. Later this month, entrepreneurs from the Turkish province of Kocaeli plan to visit Russia’s North Caucasus region of North Ossetia-Alania to talk about joint investment initiatives.

While economic ties are being restored, political relations have their own developments. The frequent meetings recently between Putin and Erdogan, and active diplomacy regarding Syria, may signal that Russian-Turkish relations have never been as close as they are now. Russian experts and media discourse frequently portray Turkey and Russia as “close friends” and “allies." Proponents of this narrative stress the countries’ cooperation on Syria and Russia's potential sale to Turkey, a NATO member, of the S-400 air defense system. The Russian public's opinion has also changed toward Turkey. A recent public survey conducted by Russian independent polling organization Levada Center shows that now only 8% of Russians view Turkey as an enemy — a stark contrast to 29% in 2016.

An orientation toward close ties between the two countries might be why Russian media — mostly state run or close to Kremlin — preferred on the second anniversary of the jet crisis not to call much attention to the incident. Instead, the media focused on the trilateral meeting in Sochi, where leaders of Russia, Turkey and Iran were discussing Syria’s future. Russian media compared the meeting in Sochi with the Yalta Conference of 1945, when the leaders of the Soviet Union, the United States and the United Kingdom discussed Germany and Europe’s postwar reorganization.

However, many in Russia still believe that despite close cooperation, Turkey is an unreliable partner. Speaking with Russia’s official news agency TASS on the jet crisis' second anniversary, Yury Shvytkin, the deputy chairman of the State Duma Defense Committee, said no one in Russia has forgotten about the plane tragedy.

"We remember; we bow our heads before our pilots. But Turkey apologized for this very serious incident. After this, relations began to improve. Russia helped Turkey to prevent the [attempted] military coup [in July 2016] by providing information that helped Erdogan remain in power," said Shvytkin. He also stressed both countries’ cooperation in Syria, where Moscow and Ankara have some common interests and goals.

Vladimir Mukhin, a Russian military expert and professor at the Academy of Military Science, is more skeptical. He believes Moscow forgave Ankara for downing the jet, but didn't forget anything.

“The incident will forever remain a tragic page in the history of Russian-Turkish relations," he said. "The problems that existed two years ago, unfortunately, have not gone anywhere. Turkey still supports militant groups that are hostile to Russia and the Syrian government. Erdogan himself is not too enthusiastic about the regime of [Syrian President] Bashar al-Assad," whom Putin supports. "And all this imposes a certain imprint on our relations.” He added that it would be correct to call the two sides “partners,” but not allies.

Ilshat Saetov, from the Institute of Oriental Studies of the Russian Academy of Sciences, told Al-Monitor that although Moscow forgave Ankara, it no longer trusts Turkey. “I doubt that the former personal friendship between presidents is possible. It is also unlikely that Turkey will leave NATO and create a military alliance with Russia.”