Russia and Turkey have made strides in improving their ties, but the relationship is going to need far more than the issuance of commemorative plates celebrating the Aug. 9 meeting of the countries' presidents in the Constantine Palace's Greek Room. 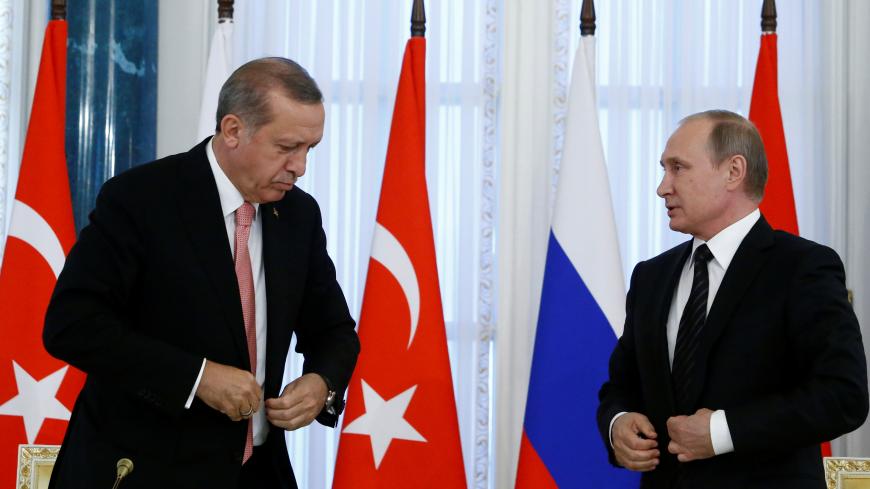 Russian President Vladimir Putin’s Aug. 9 meeting with Turkish President Recep Tayyip Erdogan didn’t solve all the problems in the complex Russian-Turkish relationship, but it seems likely to impart further momentum to the rapprochement following Erdogan’s apology for Ankara’s downing of a Russian Su-24 in November 2015. Still, the limits to the Russia-Turkey relationship may already be apparent to some in Moscow.

On the positive side, perhaps most significant is the fact that Putin did not limit the event to a one-on-one meeting with Erdogan. Indeed, had the Kremlin sought to draw out Erdogan’s penitence, Russian officials could have done so; Putin could even have pressed Erdogan to repeat his somewhat weak written apology live on camera on Russian territory. Instead, Russia’s president was magnanimous in victory; he not only met his Turkish counterpart, but assembled several key subordinates for a larger and more practically oriented conversation about restarting specific bilateral projects. Russia’s high-level delegation included Foreign Minister Sergey Lavrov, Putin’s foreign policy assistant Yury Ushakov, General Staff Chief Valery Gerasimov, Gazprom Chairman Alexey Miller, and Russia’s energy, economic and transport ministers. Putin’s special representative on Syria also took part, as did Russia’s ambassador to Turkey.

Russia’s president would not bring together a group like this if he didn’t want to turn the Russian-Turkish relationship around. Putin also addressed Russian and Turkish business leaders, whom he told, “We should not simply return to the previous level but exceed it and go further.” While it will not be easy to surpass souvenir plates displaying the two presidents shaking hands, Moscow’s effort in presenting these during the meetings likewise demonstrates more than casual interest in the relationship.

Putin’s remarks at a joint press conference following the meetings suggest one of Moscow’s principal motives in accepting Erdogan’s apology so readily: The Russian president spoke at some length about restoring Russian-Turkish trade, resuming energy projects, lifting restrictions on tourism and reopening Russia’s construction sector to Turkish firms and workers. In the transcript, this continues for six paragraphs, compared with only four sentences about “pressing international issues,” including Syria. On the latter topics, the Kremlin leader seemed decidedly less optimistic.

Nevertheless, Putin’s economic focus allows him to demonstrate that he is trying to do something to stimulate Russia’s weak economy, which was still shrinking in the second quarter — albeit to a lesser degree than many economists expected. This may be particularly important in advance of September parliamentary elections in Russia and in framing the country’s political environment in advance of the 2018 presidential elections. In this context, Andranik Migranyan, a professor at Russia’s prestigious Moscow State Institute for International Relations and a well-connected analyst of Russia’s politics and foreign policy, told Al-Monitor that reopening Russian tourism to Turkey is also a significant gesture to middle-class Russians reluctant to travel to Egypt (another popular and inexpensive destination) due to security concerns.

Nevertheless, the Russian-Turkish relationship is far from a simple one and it will take more than a successful summit to address its underlying weaknesses. As Migranyan put it, there have been “many wars between Russia and Turkey and they have conflicting interests in many areas. None of this has disappeared.” In his view, Putin and Erdogan are using one another to demonstrate that each has non-Western foreign policy options and that Western governments will not be able to isolate either. “Putin and Erdogan are almost in the same position” in their differences with the West, he said, “though of course Putin’s position is stronger.” Migranyan added that “of course” neither Putin nor Erdogan trusts the other.

This lack of trust lends a degree of credibility to speculation that Putin was sending a signal to his outwardly repentant counterpart by holding their official meetings in the Greek Room in a former imperial palace in St. Petersburg; it is precisely a lack of trust that would make it useful to send such a message.

Moreover, the selection of the summit venue appears to have been quite deliberate. Putin was in Baku, Azerbaijan, just the previous day for a three-way session with the presidents of Azerbaijan and Iran. It would have been much more convenient for both Putin and Erdogan to meet in Sochi, in southern Russia, where Putin often receives foreign heads of state. If Putin did not want to see Erdogan in Sochi, the Kremlin could have proposed a meeting in Moscow, where Putin met with Armenia’s president and, separately, with several Russian Cabinet members the following day. Moscow would also have required less travel for the two presidents and their respective delegations — St. Petersburg is much farther north.

Putin implicitly referred to the extra travel required when he pointed out that Erdogan “found the time to come to St. Petersburg” in his statement to the press, something that he said “certainly shows the interest of our Turkish partners in restoring cooperation with Russia.”

Less noticed than the choice of the Greek Room has been the larger summit venue: the renovated Constantine Palace, where Russia hosted the G-20 Summit in 2013. According to some sources, the palace took on its name in the mid-19th century as a summer residence of Grand Duke Constantine, a son of Czar Nicholas I. The most prominent Constantine (and a source of the name’s popularity in many Orthodox Christian populations) was of course Rome’s first Christian emperor, who gave his name to Constantinople, today’s Istanbul. Constantine is of special interest to some far-right Russian nationalists, who see their own country as the “third Rome,” a reference to Constantine’s description of the Byzantine Empire as the “second Rome.”

From this perspective, meeting at the Constantine Palace has a considerably deeper and richer symbolism — though one far more mixed than the rather unsubtle message of the Greek Room. Like pre- and post-summit statements reflecting Russian-Turkish differences over Syria, it is a visible reminder that notwithstanding the important common strategic interests that have energized Russian-Turkish relations for more than a decade, Moscow and Ankara are not easy partners.

For his part, Migranyan was bemused at Western concerns that Turkey could align with Moscow and leave NATO, or even extract significant concessions from other NATO governments troubled by Ankara’s flirtation with Russia. “Turkey is much more dependent on the United States” than the reverse, he argued, before asking, “How many Turkish jets might have been destroyed” after the Su-24 incident if Turkey had not been a NATO member?