With recent scuffles between Moscow and Ankara, further instability threatens the Middle East conflict; but will either country really push things that far? 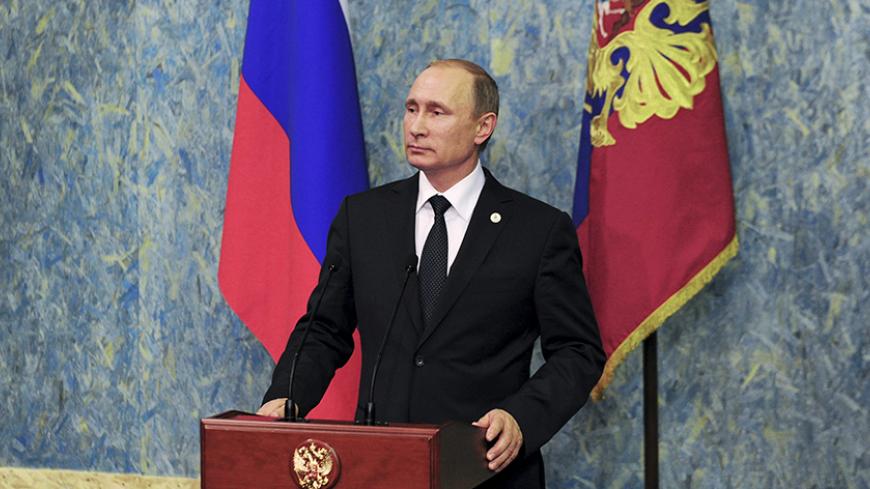 Notwithstanding Russian President Vladimir Putin’s declaration that Turkey was “stabbing us in the back” by downing a Russian Su-24 jet along the Syrian-Turkish border, Moscow is well aware of the costs of a complete breakdown in its relations with Ankara and — at least so far — appears set on avoiding that outcome. Nevertheless, neither Putin nor his fellow strongman Turkish President Recep Tayyip Erdogan seem likely to find it easy to climb down from the rhetorical heights they have scaled in contesting one another’s accounts of what happened and why. And the longer the current situation lasts, the more perilous it could become.

Prime Minister Dmitry Medvedev has stated that his government will act “pragmatically” in imposing economic sanctions on Turkey, telling his assembled vice prime ministers that “the decisions we make should be maximally sensitive for the Turkish side and minimally costly to our economic interests.” Clarifying this in an article in Russia’s official government newspaper Rossiiskaya Gazeta — helpfully titled “We don’t need Turkish vegetables” — Deputy Prime Minister Arkady Dvorkovich explained that the government was working to limit any impact on consumer prices.

Russian officials appear considerably more sanguine about new limits on travel and tourism to Turkey; apparently, some hope that Russians will see their country’s own Black Sea destinations in Sochi and Russian-occupied Crimea as attractive alternatives. Indeed, the head of Russia’s federal agency for tourism projects a decline of 40% in tourist travel outside the country (due to the bombing of a Russian passenger jet in Egypt and the sanctions on Turkey) and expects “a massive redistribution of tourist flows favoring domestic tourism.”

Still, Russia’s leaders — including Putin — are generally exercising restraint. Moscow has not moved to halt its lucrative energy trade with Turkey, which (with other natural resources) accounted for nearly 70% of Russia’s exports to Turkey and some $17 billion in 2013, though it has suspended talks on a major pipeline project and a nuclear power plant. The well-connected analyst Andranik Migranyan, a professor at the Moscow State Institute for International Relations, told Al-Monitor that the pipeline and the nuclear plant may never happen — the nuclear deal in particular was “unfavorable” for Moscow and was a “long-term investment in Turkey, thinking that Turkey would be a long-term friend.” That looks quite unlikely today.

The reasons for Moscow’s caution are relatively straightforward — to start, Russia already faces significant economic problems due to low energy prices and Western sanctions (which Turkey generally avoided supporting) and can’t afford too many self-inflicted wounds. Beyond that, Turkey can have a significant impact on Russia’s interests in its immediate neighborhood, especially in the Caucasus region and in Central Asia. Indeed, Putin recalled in his recent address to Russia’s Federal Assembly that “the militants who operated in the North Caucasus in the 1990s and 2000s found refuge and received moral and material assistance in Turkey.” Indeed, Migranyan sees Turkey’s attack on the Su-24 as motivated in part by Moscow’s resistance to Ankara’s regional ambitions, including in Syria.

Of course, Turkey also controls the Bosporus Straits and therefore is in a position to dominate Russia’s access to the Mediterranean from the Black Sea. While the Montreux Convention imposes certain constraints on Turkey’s management of the straits, Russian military officials are unlikely to count on Ankara to uphold them in any truly serious conflict between Russia and Turkey. Though such a conflict appears quite unlikely at this point, military planners can never wholly discount worst-case scenarios.

The broader problem for Putin (and for Erdogan) is that the crisis appears to have obliterated more than a decade of Russian efforts at cultivating Erdogan and Turkey as part of Moscow’s wider effort to build its regional influence and to complicate NATO decision-making. Among other things, this seems likely to cool any Russian interest in Turkey’s recent flirtation with membership in the Shanghai Cooperation Organization, something that senior Russian officials otherwise would have welcomed as a wedge into NATO’s southeastern flank. More generally, it largely removes Ankara as a “card” in the Russian president’s already weak hand in his relations with NATO countries. Ironically, this also weakens Turkey’s leverage vis-a-vis Washington and European capitals, upon whom Erdogan now depends to an unexpected degree.

The danger for Turkey is that Russia’s leader tends to take incidents such as the Su-24 attack as a personal affront. Thus, while Moscow’s response has been uncharacteristically calibrated so far, the event may well have important (and unpredictable) long-term consequences. Putin’s recent statements certainly suggest that he is looking for ways to respond at a time and in a manner of his own choosing:

We are not going to rattle the sabre. But, if someone thinks they can commit a heinous war crime, kill our people and get away with it, suffering nothing but a ban on tomato imports, or a few restrictions in construction or other industries, they’re delusional. We’ll remind them of what they did, more than once. They’ll regret it. We know what to do.

Putin has also given specific direction to Russian commanders in responding to “provocations against our service members,” telling his assembled generals, “My order is to act harshly. Any targets threatening the Russian group [in Syria] or our infrastructure on the ground should be destroyed immediately.” A Russian warship’s recent warning shots at a Turkish fishing vessel illustrate how Russian officers may interpret Putin’s instructions. As Andranik Migranyan put it, top officials likely believe that “Turkey must be punished” — and that it could happen “anyplace where Russia can have a legitimate right to destroy a Turkish airplane or hit a Turkish ship.” This is a potentially explosive situation.

Indeed, Ankara’s decision to shoot down a Russian Su-24 does not seem to have improved Turkey’s security along its southern border at all. On the contrary, Moscow’s intensified airstrikes in Syria, its new rules of engagement and Russia’s deployment of its advanced S-400 anti-aircraft missile system at its air base in Syria can only worsen the environment that Turkish military officers must consider in planning operations near (or inside) Syria. The S-400’s 400-kilometer (250-mile) range extends over a significant portion of southern Turkey and the system can track hundreds of targets. More broadly, the contrast between Erdogan’s apparent attempt at demonstrating toughness in ordering the move and his “regret” afterward — followed by an ill-advised request to meet his Russian counterpart — will hardly convey resolve. Rather than drawing a red line, Turkey’s leader may well have blurred one. This is rarely a good idea when dealing with Putin.