Ankara is now being compelled to backtrack on its Syria policy in the face of Russian threats and sanctions, while the United States stands as one of the prime beneficiaries of the crisis. 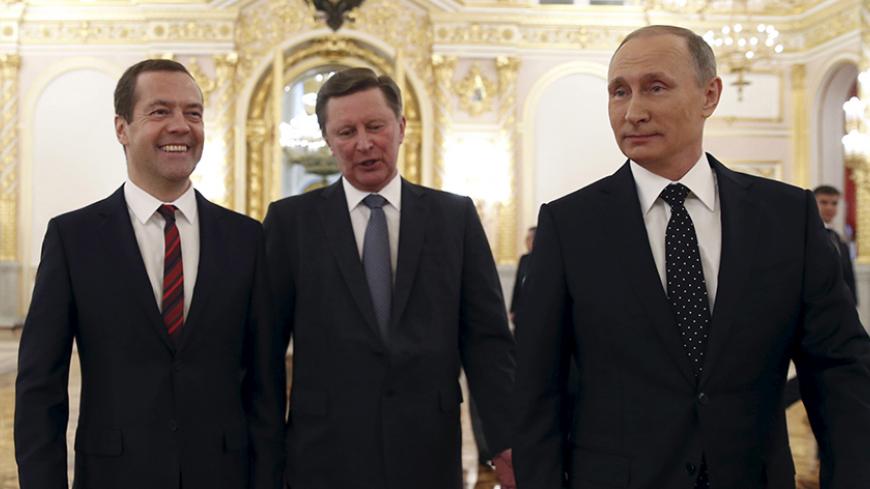 Russian President Vladimir Putin (R), Kremlin Chief of Staff Sergei Ivanov (C) and Prime Minister Dmitry Medvedev (L) walk after Putin's address to the Federal Assembly at the Kremlin in Moscow, Dec. 3, 2015. Putin used his annual state of the nation speech to warn Turkey the Kremlin planned to adopt further sanctions against it to punish Ankara for shooting down a Russian warplane. - REUTERS/Dmitry Astakhov

What should be the key question to ask for an accurate understanding of why Ankara downed a Russian Su-24 warplane in the Turkish-Syrian border region on Nov. 24? If we had tried to formulate the question on the day of the incident, most of us would have probably asked, “What interest does Ankara have in downing a Russian plane?” But now, two weeks after the incident, we have the chance to compare the two countries’ attitudes and actions in the crisis, and then the most accurate and pertinent question emerges: “What interest does Moscow have in making Turkey shoot down a Russian plane?”

Indeed, Turkey downed the plane but Russia was the playmaker in this crisis. The speed and scope of the sanctions Moscow slapped on Turkey immediately after the incident in the realms of tourism, foreign trade, investment and joint projects suggest that the set of moves could have been planned in advance for a potential Syria-related crisis. The deployment of S-400 air defense missiles at the Hmeymim air base in Syria only two days after the incident indicates that the deployment was pre-planned.

Another indication of pre-crisis preparation is the swift frontal attack by Russia’s propaganda machine on the issue of the Islamic State’s illicit oil trade with Turkey, directly targeting President Recep Tayyip Erdogan and his family. The Russian propaganda seems directed at the Western public, to further worsen Erdogan’s already unfavorable image and thus make it harder for NATO allies to back Turkey up. In short, the Russians have been trying to isolate Turkey in the crisis.

A similar review of Ankara’s actions offers no signs of significant pre-planning. In fact, Ankara has taken no steps of this kind. Its attitude since Nov. 24, when the Su-24 was downed, boils down to efforts to calm Russia's pushing a policy of planned escalation, and failing to do that, put on a brave face against the Russian sanctions. On Dec. 5, for instance, Erdogan sought to downplay Russia’s decision to significantly curb imports from Turkey, saying, “So what if you buy or not!” Similarly, he has repeated at every opportunity that Ankara will not apologize to Moscow.

Certainly, Turkey is not expected to apologize for shooting down a foreign warplane that allegedly violated its air space. But in any case, Russia’s goal here is not an apology and compensation to close the incident. Had it been, its sanctions would not have been so diverse, radical and comprehensive nor its tone so brusque.

Moscow’s ultimate objective appears to be the removal of the core reason that prompted its military intervention in Syria: the bankrupt Syria policy that Erdogan and his prime minister, Ahmet Davutoglu, have maintained with an irrational insistence.

No doubt one of the main reasons for the Russian intervention was to prevent the uncontrolled collapse of the Damascus regime. Battling IS was another. The United States getting Ankara’s approval to deploy warplanes at the Incirlik base, not far from Syria, could be seen as a secondary reason. Yet, the mother of all the reasons is Turkey’s Syria policy. Ankara’s proxy war against Damascus, backed by Riyadh and Doha, has been the primary factor behind the regime’s abrupt descent into an uncontrolled collapse.

Without Turkish soil being available for the indiscriminate use of jihadis since 2011, the conditions that gave rise to IS would have not taken hold in northern Syria, and IS would have not grown strong enough to become a major security threat for the whole world. In this sense, the deployment of the US Air Force to the Incirlik base in the fight against IS was also a result of Ankara’s policies.

As a prerequisite for the Russian intervention to achieve its goals, Moscow seems to have decided that Ankara should be deterred by any means necessary from maintaining its current Syria policy, and shaped its game plan around this political objective. Russia thus used crisis engineering to drag Turkey into a confrontation, which, at the end of the day, would be detrimental to Turkey.

Using its air power, Russia threatened Turkish interests in two ways. On the ground, anti-regime Turkmen groups, armed and organized by Turkey, and other jihadi factions were dealt setbacks, incurring major casualties against regime forces in critical areas in the mountainous region neighboring Turkey’s Hatay province. In the air, Ankara was provoked with multiple air space violations and radar harassment.

Moscow’s harassment and threats also had a psychological aspect, which obviously affected decision-makers in Ankara. A strong sign that they felt cornered and compelled to act against Russia could be seen in a statement Davutoglu made Nov. 22, two days before the downing of the Russian jet. He said after a security summit in Ankara, “Our security forces have been instructed to retaliate immediately in the event of any development threatening border security.”

This statement also explains the source of the political decision that led to the missile striking the Russian plane after it allegedly violated Turkish air space for as briefly as 17 seconds.

In sum, Turkey’s Syria policy has dragged it to a confrontation with Russia, and no one knows how and when it will end. Paradoxically, the United States has been the primary beneficiary of the crisis so far. The breakdown of the close ties between Vladimir Putin’s Russia and Erdogan’s Turkey — which remains a NATO member despite its Islamist and authoritarian tilt — can only please the United States, which was highly irked by those bonds. Ankara will now feel compelled to act as a more coherent partner of the West on security issues, as Russia’s military threat is forcing Turkey to move back closer to the Western bloc from which it had drifted in recent years. A Putin left with a bloody nose after a NATO member downed his plane could in no way be disturbing to Washington. On the contrary, it can only be pleasing.

In the wake of the plane incident and the deployment of S-400s in the area, Turkey has lost also the leverage it used to pressure the United States for a no-fly zone in Syria. Now Washington stands as the second capital after Moscow, where Ankara’s abandonment of its current Syria policy, the source of much instability and mistrust, will be greeted as a most welcome development.