Ankara’s recent political and strategic mistakes have resulted in an anti-Turkish alliance in the Middle East that looks to Moscow for support. 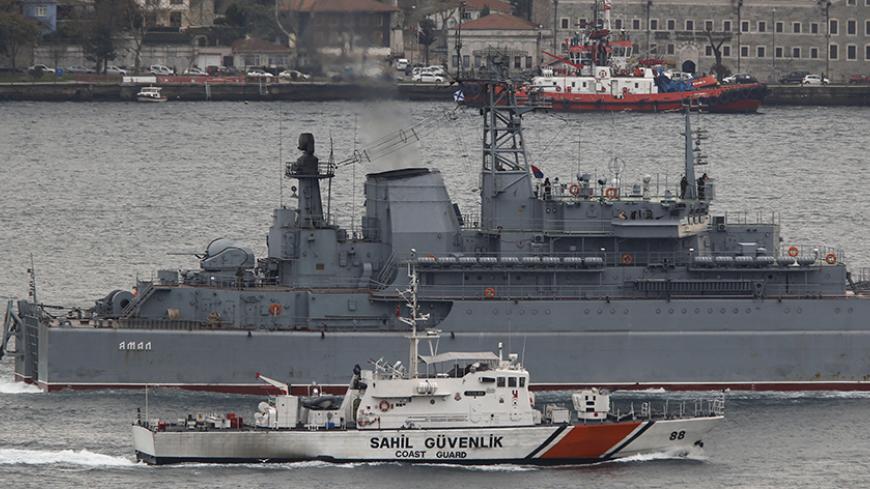 The Russian Navy’s large landing ship Yamal is escorted by a Turkish Navy Coast Guard boat as it sets sail in the Bosphorus, on its way to the Mediterranean Sea, in Istanbul, Turkey, Dec. 9, 2015. - REUTERS/Murad Sezer

Relations between Ankara and Moscow have been in an unabated tailspin since Nov. 24, when Turkey downed a Russian jet. The plane was on a mission against Turkish-supported forces fighting in northern Syria against Syrian President Bashar al-Assad's regime.

Russia is making it amply clear it does not intend to de-escalate the crisis until Turkey accepts its conditions, starting with a formal apology for the death of a Russian pilot killed by Turkmen militants while still in his parachute harness. This act in particular infuriated Russian citizens, who are clamoring for Turkey to be punished.

The entire incident also has weakened Turkey’s already frail hand in Syria and Iraq. Moscow is making it apparent that it plans to thwart Ankara’s plans in Iraq and Syria and that Turkey will have little, if any, say in international efforts to end Syria's bloody civil war.

Russian President Vladimir Putin, who is still fuming despite Ankara’s attempts to establish a dialogue, continues to spearhead a relentless campaign against Turkey. Putin is accusing Turkey of assisting Islamic terrorism in the region, especially by acting as a conduit for the oil the Islamic State (IS) is smuggling to fuel its campaign of terrorism in Syria and Iraq.

Turkish President Recep Tayyip Erdogan, Putin’s onetime close friend, is personally in Moscow’s crosshairs. Editorials in the mainstream Russian media vie with each other to vilify him and members of his family with demeaning adjectives and outlandish claims, stoking the hysteria among Russians against all things Turkish.

Andrey Karlov, Russia’s ambassador to Turkey, has spelled out what Moscow wants from Ankara if bilateral ties are to improve. In an exclusive interview with daily Cumhuriyet Dec. 15, Karlov cited three demands.

“Firstly, we want an apology for destroying our plane and martyring our soldier. Secondly, we want those responsible for this to be found and punished appropriately. Finally, we want Russia’s damages to be compensated,” Karlov said.

“If these expectations are not met, then Turkey’s statements will not produce any results. Turkey is issuing statements that do not comply with its call for dialogue,” he added, clearly referring to Ankara's openly expressed determination not to apologize.

Reflecting the anger in Moscow, Karlov said Russia's relationship with Turkey is undergoing its deepest crisis ever. “I have to say, regretfully, that our history has been divided into two phases: before Nov. 24 and after Nov 24,” he said, openly suggesting that Russia would not let bygones be bygones anytime soon.

Turkey’s recent attempt to deploy forces in Bashiqa, Iraq, near Mosul, has also given Moscow fresh ammunition against Ankara.

The move drove Iraq to seek Russian support at the UN Security Council against what Iraq claims is Turkey's violation of its sovereignty. Ankara says its troops are in Iraq by agreement, to train local fighters against IS.

Iraqi officials, however, maintain they were not aware of this latest deployment, which they insist is in excess of what is required to train anti-IS fighters. The officials argue that this deployment came against Baghdad’s wishes and implies Turkey might have other motives — a claim Russia supports.

Ankara ended up not only facing Baghdad's objections and Russian support for the Iraqi government, but also the lack of its NATO allies' support for the troop deployment in Bashiqa. In addition, Arab League Secretary-General Nabil Elaraby accused Turkey of “blatantly [intervening] in Iraq.”

The pressure forced Ankara to start withdrawing some troops from the region toward the relatively friendlier territory of the Kurdistan Regional Government.

These developments left many wondering once again if the ruling Justice and Development Party has a coherent regional policy based on realistic assessments of the situation on the ground and of Turkey’s capabilities. The downing of the Russian jet and the deployment of reinforcements in Bashiqa are seen as the latest examples of actions by the government that have ended up with negative consequences for Turkey.

One such consequence is that Russia has increased the intensity and ferocity of its air operations against groups in northern Syria that are supported by Ankara, especially the Turkmen. This has resulted in Prime Minister Ahmet Davutoglu accusing Moscow of ethnic cleansing in the region.

"Russia is trying to make ethnic cleansing in northern Latakia to force [out] all Turkmen and Sunni populations who do not have good relations with the [Syrian] regime" Davutoglu told foreign reporters Dec. 9 in Istanbul.

Russia said the accusation was groundless. “It is strange to make such statements as they demonstrate the complete detachment of the Turkish leadership from reality, from what is actually happening in the region,” Russian Ministry of Foreign Affairs spokeswoman Maria Zakharova told reporters in Moscow.

Another consequence of downing the Russian jet — which has left some of Turkey’s NATO allies less than happy despite their expressions of support for Ankara — is that it has complicated Western efforts to work with Russia to resolve the Syrian crisis.