How are Turkey and Russia getting along these days?

As Moscow and Ankara work to shore up their relations, it's clear the foundation wasn't all that solid to begin with. 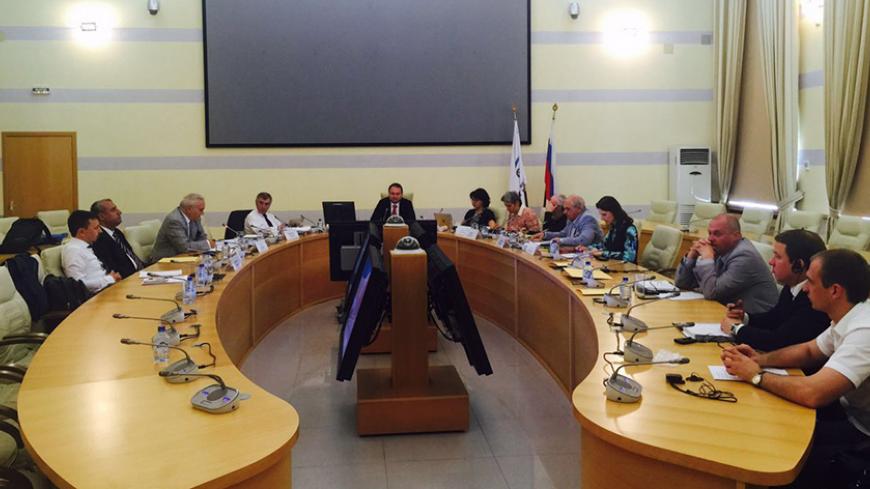 Representatives of the Ankara Policy Center attend a meeting at the Russian Institute for Strategic Relations (RISS) to discuss the normalization of Russian-Turkish relations, June 2, 2016. - Barbaros Binicioglu

Russia and Turkey are extending gestures to one another in hopes of strengthening ties, but there are many factors at play: their opposing goals in the Syrian war, Black Sea politics and — not a small sticking point — Russia is still waiting for an apology and restitution for Turkey's downing of its jet last year.

The Russian Institute for Strategic Relations (RISS), founded by President Vladimir Putin, on June 2 hosted representatives of the Ankara Policy Center. On the meeting room table was a bottle of RISS whisky with the brand name Strategy. This was the table prepared to assist in the normalization of Russian-Turkish relations. RISS paid all the expenses of the Turkish team. Both sides reported the meeting's outcome to their national leaders.

Turkish President Recep Tayyip Erdogan, meanwhile, sent a letter of congratulations to Putin on the occasion of Russia's independence day (June 12) with the message, “I hope relations between Turkey and Russia will reach the levels they deserve.”

To manage this sensitive process, Erdogan transferred Turkey’s ambassador to Brazil, Huseyin Dirioz, who has NATO and Middle East experience, to Moscow. Dirioz, who once served as deputy secretary-general of NATO, also was ambassador to Jordan and worked as director-general of Middle East affairs in Turkey's Foreign Ministry. Another gesture by Erdogan was to invite Andrey Karlov, the Russian ambassador to Ankara, to an iftar meal (to break the day's Ramadan fast) with other foreign diplomats.

While these steps were being taken to forge a new beginning with Russia, Turkey-supported groups lost all their positions on northern Syria’s Turkmen Mountain, which has long been extolled in Turkey's ruling party circles as an “Ottoman legacy.” Russian-Turkish relations first began to sour in October and November when Russia attacked the groups on Turkmen Mountain. Turkey reacted to these operations strongly, claiming, “Turkmens are being massacred.” On Nov. 24, Turkey shot down a Russian warplane on charges that it violated Turkish air space. Turkey-supported groups on the ground then shot and killed the Russian pilot who had bailed out and landed in their midst.

In recent days, the Syrian army recaptured many villages that were controlled by opposition groups. With its recent advances, the Syrian army is now about 1 mile from Turkey’s borders in the Bayir-Bucak Turkmen region.

Izzet Sohta, who is in charge of military affairs in the Syrian Turkmen Assembly, told Al-Monitor, “Isa Pinar, Karaman and Hayat have been lost. We still control Yamadi, Sallur and Jip Toros, but the situation is extremely critical. We don’t have the means to confront the weapons used by a superpower.” In the Bayir-Bucak region, opposition groups fighting the Syrian army include Salafist-Jihadist group Jabhat al-Nusra, Ahrar al-Sham, Jund al-Sham, the Turkistan Islamic Party and the 2nd Coastal Division of Turkmens.

Abdurrahman Mustafa, former chairman of the Turkmen Assembly, also confirmed that the Turkmens lost some critical positions, but noted they have taken some of these areas back through counterattacks. “The struggle is not over. The Turkish government says that it is behind Turkmens. But as you know, the crisis has now become international and what Turkey can do is limited,” he told Al-Monitor.

Ankara’s policy of reducing the Turkmens to a useful card to play against the Syrian regime has thus collapsed.

The loss of Turkmen Mountain coincided with the moves to restore Ankara-Moscow relations. While Turkey’s Islamist and nationalist circles are loudly protesting the loss of “Turkmen Mountain, which is our honor and dignity,” Russia continues to support the Syrian army, but now is more discreet in its pronouncements.

Erdogan’s desperation and silence over the loss of Turkmen Mountain appears to be the cost of improving relations with Moscow. Nevertheless, neither Erdogan’s congratulatory letter to Putin nor his iftar invitation to the Russian ambassador was enough to open a new page in relations with Moscow. Kremlin spokesman Dmitry Peskov said Erdogan’s letter was a “protocol message” and Russia is still demanding an apology and compensation for the downed jet.

Despite Ankara's gestures and Moscow's softer tone, it is not yet possible to talk of a meaningful dialogue between the two sides. The Syrian war and the crisis that erupted from the downed jet proved that Turkish-Russian relations are not based on solid foundations and go beyond Russian tourists, Russian brides in Turkey, commercial links and the work of Turkish contractors in the Russian construction sector. This was the conclusion of the June 2 meeting in Moscow attended by former diplomats, intelligence personnel and experts.

Barbaros Binicioglu, Istanbul's representative of the Ankara Policy Center, noted that participants at the meeting stressed the need for comprehensive cooperation and dialogue in both official and unofficial sectors.

Business leaders want Turkey and Russia to restore relations. Turkey’s tense relations with the United States and the European Union also contribute to the pressure for better ties between Ankara and Moscow. But Russians are not happy with Ankara’s call for NATO to play a bigger role in the Black Sea. In Moscow, Al-Monitor’s contacts noted that they feel such a move threatens the Montreux Treaty, which regulates navigation through Turkey’s straits. Though Turkey wants to repair its relations with Russia, such controversial moves obstruct true restoration of a healthy dialogue.

Binicioglu shared the outcome of the Moscow meeting with Al-Monitor: “Everyone is keen to develop relations with Turkey, but the diplomatic channels are not operating as desired. They all think something has to be done, hence the Moscow meeting. A second such gathering will be in Turkey. In this framework we signed a cooperation agreement in Moscow and conveyed our suggestions to President Erdogan."

He continued, "Russians submitted their report to Putin. They believe that the shooting down of their plane was a provocation by the West, and Turkey did not do it intentionally. But Ankara’s owning up to the incident, its declaration that it would do it again and the killing of a live pilot caused serious reactions. This is how Russians see it. If the crisis had been managed wisely and not exploited to impress the public opinion, the situation would not have come to this point. But we were all aware Turk-Russian relations are fragile, hence the need to reassess them.”

Despite massive strategic projects such as the Akkuyu nuclear power station, Blue Stream natural gas pipeline and Turkish Stream pipeline, Turkish-Russian relations are devoid of strategic wisdom. Another negative element is the lack of mutual confidence and the Turkish government’s vacillating moves in its approach to diverse blocs.