Can Turkey really turn to Russia?

Despite anger at the West after the recent failed coup, the strategic ties some desire with Russia do not appear realistic. 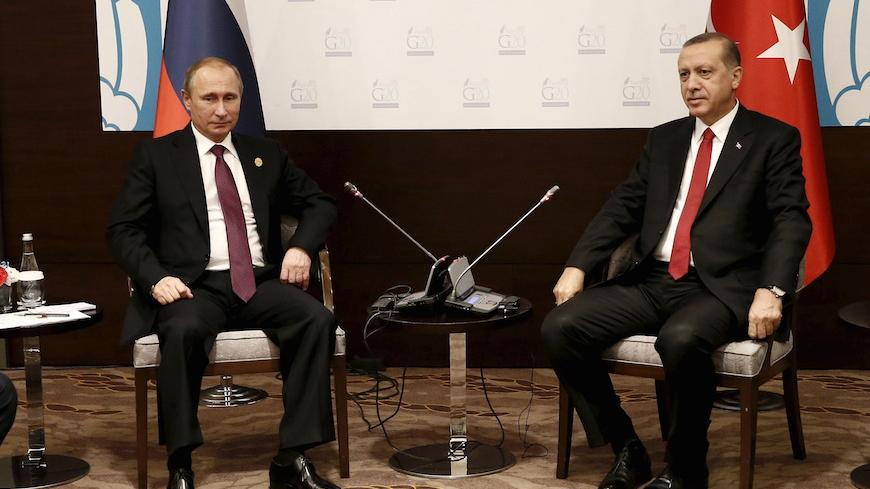 Russia appears to be the main beneficiary of the July 15 attempted coup in Turkey. Moscow clearly sees a strategic opportunity for itself given the sharp increase in anti-American and anti-European sentiments in Turkey, which are being fanned by Turkish President Recep Tayyip Erdogan.

Erdogan supporters, and many Turks opposed to Erdogan, are convinced of a US finger in the attempt to topple Erdogan. The fact that Fethullah Gulen — the Islamic cleric accused of masterminding the coup — resides freely in Pennsylvania, and the belief that the United States is dragging its feet over Ankara’s demand for Gulen’s extradition, has raised anti-American feelings among Turks to a fever pitch.

This belief has also increased calls for Turkey to seek strategic partnerships with Russia and to replace ties with the United States, NATO and the European Union. These calls are clearly being monitored closely in Moscow. Eyes will therefore be focused on Erdogan’s talks with Russian President Vladimir Putin in Moscow on Aug. 9.

The current political climate between the two countries is also conducive to deepening ties. Ankara and Moscow are presently reconciling after half a year of tensions following the downing of a Russian fighter jet by Turkey in November while it was on a mission against forces opposing Syrian President Bashar al-Assad.

The pilot of the jet was shot dead in his parachute by anti-Assad fighters supported by Ankara, which increased Russian fury against Turkey at the time. Despite Turkey’s insistence that the jet had strayed into its airspace, which Russia still denies, Erdogan apologized to Putin in a letter he sent in June over the incident, in which he referred to Russia as a “friend and strategic partner.”

Turkey’s economic losses due to the embargoes imposed by Moscow after the downing of the jet and the fact that this incident seriously diminished Turkey’s hand in Syria forced Erdogan in the end to seek reconciliation.

The failed coup has also increased Russia’s importance for quarters close to Erdogan. Calls from pro-Erdogan circles for Turkey to seek strategic partnerships with Russia and to develop a strategic Eurasian dimension to replace ties with the United States, NATO and the EU are clearly being monitored closely in Moscow with satisfaction.

With more strategic foresight than the United States and Europe, Russia played its cards right as the coup attempt was underway and was the first country to immediately condemn this attempt unequivocally. “We thank the Russian authorities, particularly President Putin. We have received unconditional support from Russia, unlike other countries,” Turkish Foreign Minister Mevlut Cavusoglu told news channel Haberturk TV.

Turkey is angry with Europe over its “wait and see” stance during and after the coup attempt. The general view is that Europe’s dislike of Erdogan prevented it from providing unequivocal support for the democratically elected president and government of Turkey.

Europe’s critical position on the massive crackdown against alleged coup plotters and sympathizers in Turkey and its reactions to Erdogan’s support for the death penalty for the coup plotters is adding more grist to the anti-Western mill in Turkey.

An unsubstantiated report by the Iranian Fars News Agency, on the other hand, also put Russia in a favorable light with Erdogan supporters. Quoting various Arab sources, Fars said Moscow had alerted Erdogan hours ahead of the coup, enabling him to take the necessary precautions for his safety.

In the meantime, Ankara is pinning the blame for the downing of the Russian jet fighter on a maverick pilot who allegedly was part of the coup plot, thus providing another indication of how fast things are moving in Turkish-Russian ties. The fact that Erdogan was calling on NATO, during its recent Warsaw summit, to prevent the “Black Sea from turning into a Russian lake” appears a distant echo now.

There are indications, however, that while Moscow believes it has the upper hand against Ankara now, and will try and secure maximum advantages for itself as it responds to positive overtures from Turkey, it will still play hard to get.

Russian Foreign Minister Sergey Lavrov gave an early sign of this after the failed coup attempt when he openly declared that the future of Turkish-Russian ties would still depend on Turkey’s position on Syria.

"Much will depend on how we will cooperate on the settlement of the Syrian crisis," Lavrov said, according to TASS. “During discussions of the Syrian crisis, we provided many facts that prove that Turkish territory is used for providing supplies to terrorists and sending militants to Syria. These facts remain on the table," he added.

However, given Russia’s growing conflict with the West, which Moscow believes is trying to encircle it militarily, many doubt that Putin will want to squander the opportunity to turn Turkey away from the West. The Russian daily Pravda spelled it out plainly in a recent editorial: “Russia should not trust Erdogan, but one may have no doubt about the fact that the Turkish president is now trying to improve Turkey's relations with Russia. This makes Turkey Russia's ally in the endeavor to split the consolidated position of the West.”

Hakan Aksay, who has reported for many Turkish media outlets for years out of Moscow, believes that Russia is the most important country Turkey can turn to if it decides to downgrade its strategic ties with the West.

“If Ankara can align its Syria policy closer with Moscow, other obstacles will not be insurmountable” Aksay said in his column on the T24 website.

He argued that the Kremlin would also be prepared to put aside its claims that the Islamic State got assistance from Turkey and could also review its position regarding Syrian Kurds to Ankara’s advantage.

However, all of the expectations of Turkey and Russia moving together on the strategic level have to be considered in a realistic light, according to diplomatic experts who point to the essential differences between the two countries on a host of issues ranging from Ukraine and the Crimean Peninsula to the Middle East and Cyprus.

To overcome these differences, Turkey, which appears to be in the weaker position today, will have to radically change its foreign policy orientation in ways that would be anathema to grass-roots Islamist supporters of Erdogan, as well as Turkish nationalists.

Retired Ambassador Unal Cevikoz believes that Turkey was seriously traumatized by the coup attempt and is trying now to sound certain warnings to the West by floating the idea that it may move toward strategic ties with Russia.

“Moving in that direction in earnest, however, would be wrong because it would not serve Turkey’s long-term interests,” Cevikoz told Al-Monitor. “This does not mean we should not have good relations with Russia. To the contrary — these relations should be improved and deepened. I believe that the most important file to be taken up during Erdogan’s visit to Moscow, for example, will be the energy file,” Cevikoz added.

Cevikoz also underlined that one of Russia’s principal aims today was to weaken NATO and suggested that Turkey should not allow itself to be manipulated in this manner.

Given the way in which Turkish-Russian ties nosedived overnight after the downing of the Russian jet, and the serious differences that remain between the two countries on a host of key international issues, it appears that the future for the “strategic partnership” with Russia that some in Turkey are hoping for now, purely out of anger for the West, may not be as bright as they assume.