Has Turkey finally made nice with Russia?

Turkish President Recep Tayyip Erdogan’s apology appears to have broken the ice with Russia, but the relationship still needs time to thaw. 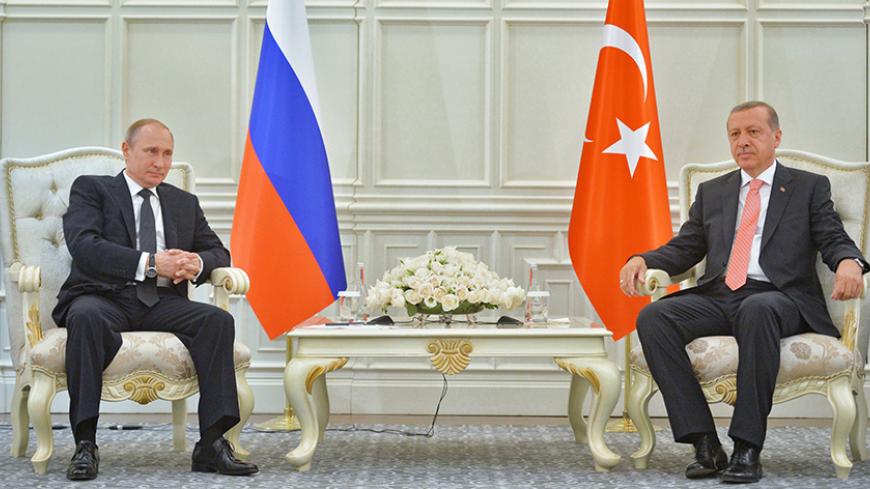 Russia's President Vladimir Putin (L) and Turkey's President Recep Tayyip Erdogan sit next to each other during their meeting in Baku, Azerbaijan, June 13, 2015. - REUTERS/Alexei Druzhinin/RIA

Russian President Vladimir Putin and his Turkish counterpart Recep Tayyip Erdogan have had their first phone conversation in seven months. After the 42-minute talk, Putin, speaking at a government session, said the pair had agreed to resume bilateral relations.

The news came just hours after Turkey suffered a terrorist attack June 28 at Istanbul Ataturk Airport. In only one day, the image of Turkey in the Russian media was transformed dramatically from “accomplices” to “victims” of terrorists.

Certainly the letter sent from Erdogan to Putin the day before gave the process a boost. The letter, with apologies for the Nov. 24 downing of a Russian warplane, was the culmination of numerous attempts by Turkish leadership to reconcile with the Kremlin. But the U-turn in Russian rhetoric and policies is even more amazing, taking into account the reaction that letter first spurred — ranging from victorious bravado to restrained contentment.

“The letter, even though addressed personally to President Putin, is an important sign for Russia as it essentially signals that the line of behavior our country chose proves it was 100% correct and accurate,” said Sen. Konstantin Kosachev, formerly Putin’s private envoy for post-Soviet states.

The most common explanation among one group of Russian experts and decision-makers was that Erdogan’s move was driven by Russia’s economic blow to Turkey. Turkish tourism and commerce have suffered severely as Russian tourists, who were once the prime visitors and consumers of all things Turkish, took their business elsewhere after Russia imposed widespread boycotts. Meanwhile, Turkish construction companies lost millions of dollars because their presence in the Russian market was critically limited.

Russian information agency Interfax reports that only 3,500 Russian tourists visited Turkey in the first two weeks of June — 98.7% fewer than during the same period in 2015. The overall assessed loss to the Turkish economy from Russian sanctions amount to at least $9 billion. Economic sanctions were widely perceived as a stronger means than political threats and military action. In this sense, it’s no wonder Putin’s first — and so far only — goodwill response to kick off the reconciliation is to lift the administrative barriers for air carriers and tourist companies to let them win tourists back. At the same time, there seems to be a firm decision by both leaders to defrost talks over the Turkish pipeline project — something in the interests of both states.

As for the letter, Erdogan sought to draw Moscow’s attention to a number of items critical to Turkish-Russian relations. First, the strategic needs of both states: “Russia is a friend and a strategic partner and we’ve never wanted to spoil relations,” wrote the Turkish president. Second, the letter called on Moscow to appreciate Ankara’s initiative in managing the consequences of downing the jet: “We bore all the risks and invested heavy efforts in claiming the body of the dead pilot from Syrian opposition groups and taking it back to Turkey.” Finally, Erdogan emphasized his readiness “to do everything possible to restore the traditionally friendly relationship between Turkey and Russia” and set a vision for the future to “jointly react to different crises in the region [and] fight against terrorism.”

While some in Moscow interpret these words as surrender, others think they aren’t worth a cent. “These apologies aren’t enough. If they believe Russian tourists will surge to their shores after these half-actions, that’s too bad. We don’t trade our national interests and dignity,” a prominent Russian military expert told Al-Monitor on condition of anonymity.

Meanwhile, the head of Chechnya, Ramzan Kadyrov, who is frequently quoted on thorny issues in Russian foreign policy, said, “It’s better to be friends with Russia over centuries than spoil the relationship once and for all.”

Between June 27 and June 29, the date the Putin-Erdogan conversation took place, Turkish authorities did not seem firm in their standing, sending contradictory signals. On June 28, Turkish Prime Minister Binali Yildirim backtracked on his statements from the previous day about Ankara’s readiness to pay compensation to the family of the dead Russian pilot. Similarly, announcements that the alleged suspect in the killing of the Russian pilot, Alparslan Celik, is now again being charged — this time for the death of the Russian marine killed trying to rescue the pilot — aren’t confirmed by his lawyers. The lawyers argue that Celik will face trial next week “only for illegally keeping and using arms.” Previous charges against Celik were dropped May 10 after Ankara’s attempt to reach out to Moscow failed. Turkey’s moves look more like bargaining chips than a precondition for reconciliation.

At the same time there was concern whether the Kremlin would be able to get an accurate read on Erdogan. Ankara’s relations with Europe aren’t working out the way he planned. Syria and the Kurds remain a prime headache, while the Turkish president simply has no chemistry with Washington. Moreover, in recent years Turkey has wasted some of the vast soft-power resources it had without obvious gains for itself. These arguments, often voiced in Moscow, created a perception that Erdogan was cornered. The common perception is: It took Erdogan a long time to understand his own situation and now it’s up to Putin to pardon him.

But basing one’s logic and subsequent policies on the premise that Erdogan was cornered might create a more serious crisis later on. Erdogan is indeed an impulsive politician whose ambition for power and influence frequently clouds his judgment on Turkey’s strategic interests. But it doesn’t necessarily mean he will desperately bend over backward for Putin.

Expecting public apologies, family compensation and acknowledgement of guilt is understandable and legitimate from the Russian perspective. The question is whether Moscow has a long-term game plan, once and if its technical, swallow-your-pride conditions are met. “We are now also expecting the Turkish government to rethink its policies in Iraq and Syria,” said Kosachev. The statement is characteristic of the thinking of Russian decision-makers, since they see Syria as the core of the bilateral contradictions. But this could be exactly where the rubber meets the road — again.

The plane crisis has become an unfortunate point in the relationship between the two states. After Nov. 24, both sides went too far with personal attacks and galvanizing their respective constituencies, further shrinking the window of opportunity for restoring relations.

It looks like Turkey and Russia will fully reconcile, but don’t expect the process to occur with head-spinning speed in the next few weeks.

Something Al-Monitor’s Ben Caspit said regarding the seeming reconciliation between Turkey and Israel could easily be applied to the future of Turkish-Russian relations: “The relationship would never be what it once was.”