With each Erdogan visit, Ankara grows more indebted to Moscow

Russia’s diplomatic, economic and security gains from its ties with Turkey keep growing amid the conflict in Syria, while Ankara becomes increasingly indebted to Moscow. 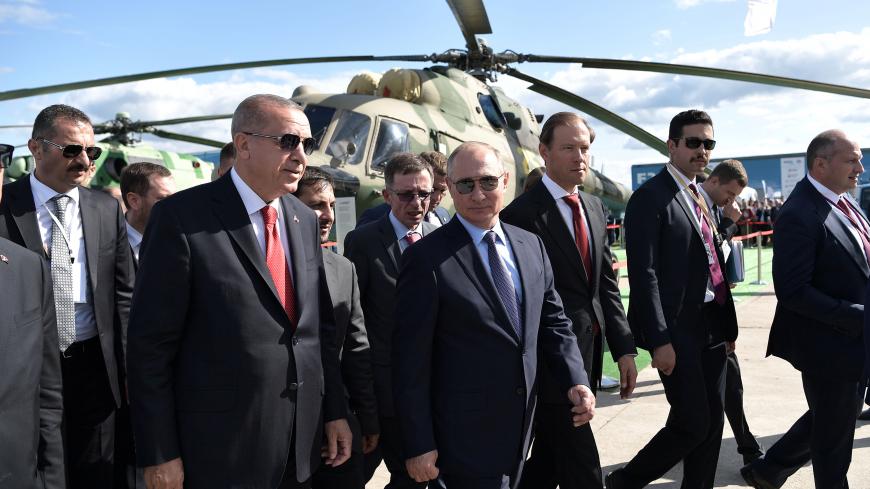 In the bumpy Turkish-Russian relationship in Syria, crisis situations have produced a pattern of face-to-face meetings between the two countries’ presidents, with Ankara typically ending up as a giver and Moscow as a taker. The latest summit between the two leaders, prompted by the escalation in Idlib, came as another confirmation of that pattern.

Tensions in the rebel-held province shot up Aug. 19 after a Syrian fighter jet struck a pickup of the Faylaq al-Sham group escorting a Turkish military convoy, which, according to Ankara, was taking reinforcements to the Turkish observation post at Morek in the southernmost corner of Idlib. The situation grew into a crisis between Ankara and Moscow as Syrian forces encircled the Morek base, where about 200 Turkish soldiers are stationed, while marching into the key town of Khan Sheikhoun.

Amid the momentous developments on the ground that day, Moscow was reluctant to communicate with Ankara and President Vladimir Putin was unresponsive to a request for a phone call with his counterpart Recep Tayyip Erdogan, Turkish sources with direct knowledge of the matter told Al-Monitor. In subsequent contacts, the Kremlin said Putin would be available to meet with Erdogan on Aug. 27 at the MAKS-2019 International Aviation and Space Salon in Zhukovsky near Moscow. That is how Erdogan headed to Russia for another emergency meeting with Putin.

At the press conference after the roughly 1½-hour meeting, Putin said the two leaders had agreed to stamp out “terrorist hotbeds” in Idlib. It is worth noting, however, that 2½ years since the launch of the Astana track between Russia, Turkey and Iran, Ankara and Moscow remain at odds in their definitions of “terrorist” groups in northwest Syria.

Erdogan, for his part, said Turkey can fulfill its responsibilities in Idlib under the Sochi deal “only after the regime puts an end to its attacks.”

Given that the Syrian army is advancing with Russian support, plus the diverging definitions of “terrorist” groups, the two leaders’ remarks suggest they failed to reach any deal on Idlib that could affect the current operational picture. This, in turn, means that confusion will continue to plague the region.

Putin welcomed a Turkish-US plan for a safe zone in Kurdish-held areas in the northeast, but seemed to attach a condition — coordination with Damascus. “The creation of a security zone on the southern borders of the Republic of Turkey will help ensure the territorial integrity of Syria itself,” he said. While this opaque remark could mean Russian support for Turkish efforts to curb the Kurdish People’s Protection Units, which Ankara sees as a terrorist group, it might also herald Russian pressure on Ankara to start negotiating with Damascus.

Erdogan’s visit was prompted by the situation in Idlib, but the venue Putin chose — an aerospace exhibition — set the stage for Moscow to open its favorite topic, namely opportunities for further defense cooperation and fresh arms sales to Turkey in the wake of the S-400 missile deal.

Showcased at the exhibition was the advanced Russian fighter jet Su-57, even if its engine problem has yet to be fixed. “Is this plane for sale?” Erdogan inquired before he and Putin climbed on the aircraft for a closer examination. By getting a NATO-country president on top of a Russian warplane, Putin certainly sought to send a message to the Western security bloc. He said Turkey was interested in purchasing Russian warplanes such as the Su-57, while Erdogan responded he would leave defense procurement officials to brainstorm the matter.

Unlike Western leaders, Putin has proved a master in speaking not only to the minds but also the hearts of both Turkish decision-makers and the Turkish people. He grasps the “emotional reality” prevailing in Ankara, where how one feels could be more consequential than what one thinks nowadays. In a move flattering nationalist sentiments, Putin offered Erdogan the opportunity to send a Turkish astronaut to space on the centenary of the Turkish republic in 2023, drawing on the recent creation of a space agency in Turkey, which has been actively advertised for domestic political consumption. The centenary of the republic will coincide with presidential elections and Erdogan is eager to make the anniversary a special milestone for his political career. Hence, Putin’s proposal appears hard to turn down. A Turkish astronaut in space ahead of the 2023 presidential polls would make for a great election gift for Erdogan.

Despite little emphasis in the media, the most important aspect of the meeting was arguably Putin’s announcement that Russia was “ready to offer flights on Su-30SM fighters to Turkish pilots.” Should this materialize, it would mark the first joint trainings between Russian and Turkish military pilots and the first time the air forces of a NATO member and Russia engage in drills aimed directly at interoperability.

Erdogan’s trip to Russia and how Putin seeks to make the most of the “emotional reality” in Turkey come as a good lesson for Western leaders, with quite some homework to do.

Back to the issue of Syria, the resolution of Turkish-Russian crises on the presidential level has evidently become a pattern, as mentioned above. Remarkably, each Putin-Erdogan summit has seen Ankara give concessions, be they economic, diplomatic or security- and defense-related, with Moscow always emerging as the winner. Syria, so it seems, has become an effective foreign policy tool for Moscow to keep Ankara in its diplomatic orbit. Hopefully, some in Western capitals, particularly the Trump administration in Washington, will take notice of that, too.