Following the assassination of the Russian ambassador to Turkey, Russia’s political and expert communities are mulling over potential masterminds behind the assassination and what responses Moscow has at its disposal. 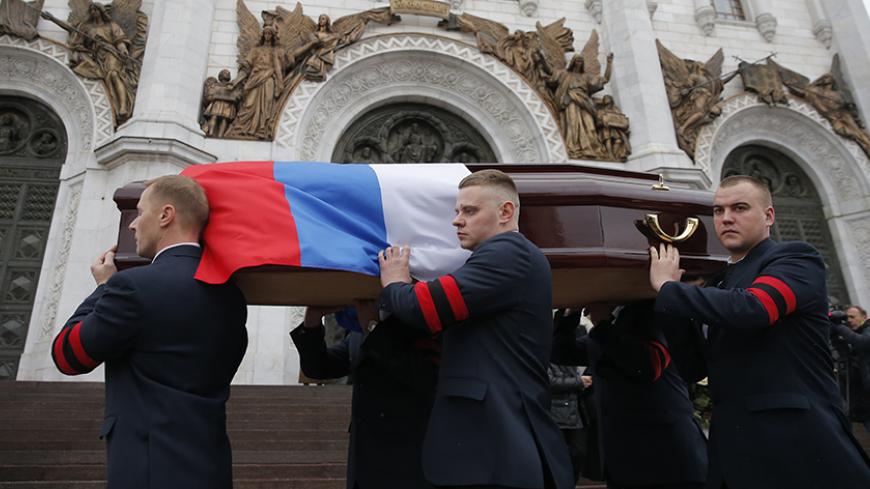 Personnel carry the coffin containing the body of Russian Ambassador to Turkey Andrei Karlov, who was shot dead by an off-duty policeman while delivering a speech at an Ankara art gallery on Dec. 19, after a memorial service in front of the Christ the Savior Cathedral in Moscow, Dec. 22, 2016. - REUTERS/Maxim Shemetov

The mourning ceremony for assassinated Russian Ambassador Andrei Karlov took place in Russia’s Foreign Ministry and was followed by a funeral service at the Cathedral of Christ the Savior in downtown Moscow. Earlier, President Vladimir Putin awarded Karlov with the nation’s highest honorary title posthumously — Hero of the Russian Federation.

On Dec. 21, the Russian government adopted a special document titled “Procedure for the Interment of Slain or Dead Ambassadors of Russia” that stipulates the procedure for bidding farewell with military honors. The ambassador’s alma mater — Moscow State Institute of International Relations-MGIMO University — established a scholarship named after Karlov, while Far Eastern Federal University in Vladivostok supported the State Duma proposal to name the university after Karlov. Among other achievements, Karlov was an authority on Korean studies and has long worked with the university while stationed in Pyongyang, North Korea, as the Russian ambassador before his posting in Ankara.

Meanwhile, Russia’s political and expert communities are mulling over potential masterminds behind the assassination and what responses Moscow has at its disposal. Quite expectedly, the main question everyone is pondering is, “Whom does it benefit?” There currently are three major groups of answers to this:

Proponents of all three versions point to the very timing of the assassination: right in between the UN Security Council’s adoption of a resolution on Aleppo that by and large reflected Moscow’s position on the conflict (Dec. 19) and a day before the critical meetings of foreign and defense ministers of Russia, Iran and Turkey in Moscow (Dec. 20). If successful — the argument goes — it would have sidelined the United States, silenced British criticism and come as a blow to the Saudi’s own standing on Syria. It might have also made life for the extremist groups in Syria more complicated: Even though Tehran, Moscow and Ankara would each continue on its own path, there seemed to be an understanding that the course toward a military confrontation was politically costly and financially weary. Besides, in recent months, Moscow and Ankara have been having top-level political and military consultations, and as Pinar Tremblay accurately noted in Al-Monitor, Karlov has been a crucial interlocutor in all of them. Therefore, using this logic, Russian politicians and experts grouped around each of the three versions depending on the degree of their antipathy regarding the West, the Islamist extremists or the level of distrust toward Turkey.

Chechen leader Ramzan Kadyrov, who is a frequent commentator on key Russian-related international events, offered a somewhat more accommodating narrative, saying on his Instagram that the 22-year-old Mevlut Mert Altintas “was executing the will of the Iblis State [Kadyrov’s own euphemism for the Islamic State (IS)]. … There can be no doubt, that both [IS] and al-Qaeda are a brainchild of Western intelligence services.”

In any case, most of the commentators shared the view that the assassination was perpetrated by “enemies” of Moscow’s and Ankara’s cooperation. Indeed, as soon as Russian-Turkish relations were set on a path of rapprochement, they faced another serious test.

What was dismissed from the very beginning was the “lone wolf” theory. Opponents of this version insist that Altintas might have had genuine negative feelings about Russia’s actions in Syria, but the assassination seems to have been calculated with a precision available to well-organized groups, not this type of individual. Even less discussed is the idea that Kurdish forces might be part in the assault. The Kurds may not be happy about what Russian-Turkish dealings may mean for their own future, but no one in Russia seriously believes the Kurdistan Workers Party would go so far as to kill the Russian ambassador to make Moscow go ballistic.

Few share what seems to be the main version Ankara is trying to present — the “mad Gulenist” theory. Speaking on a radio show soon after the assassination, Yevgeny Satanovsky, the head of the Moscow-based Institute for the Middle East, denounced the idea, saying, “Fethullah Gulen doesn’t take to such violent methods in his practices.” Earlier this year, as part of the reconciliation process with Ankara over Russia’s downed jet, Moscow closed about 150 Gulen schools across Russia. There’s little evidence that the Kremlin believed that Gulen was behind the downing, but at the time it was a necessary political move that many Russian politicians thought was in the country’s national interests. This time, however, attempts to sell the same idea would only stain the relationship.

Russian decision-makers who spoke with Al-Monitor on condition of anonymity signaled a concern over whether Turkish officials know more than they are actually telling. They believe that, to a large extent, all of the assassination hypotheses Ankara is presenting reflect the desire of the Turkish leadership to get Moscow onboard in its struggle against its own opponents — the Gulenists and the Kurds — rather than to truly and openly investigate the assassination. Indeed, the killing of Altintas raised all kinds of suspicions. The general feeling now is, even if killing the assassin was a forced measure under those circumstances, trying to shove the narratives, which on all accounts look artificial and don’t hold together under scrutinized examination, casts a dark shadow on the potential involvement of the Turkish security apparatus or someone in the government.

These suspicions are galvanized with the news of the nationalization of Akfel Holding — Turkey’s biggest private gas importer. The Turkish government snatched the assets of Gazprom, which owns a minority package of shares in the company and supplies 20% of its gas to Turkey through Akfel. The nationalization was conducted earlier in December under Turkey’s state of emergency, which Erdogan adopted after the failed coup in July. Speaking to the Russian business edition of “Kommersant,” a source close to Gazprom said, “They just took our most effective and profitable gas trader in Turkey.”

Alexei Miller, the head of Gazprom, tried to raise this issue during Turkish Prime Minister Binali Yildirim’s recent trip to Moscow, but Yildirim “didn’t provide any meaningful explanation.” Given that the gas discount for private importers is expiring in 2017, new negotiations should have started. The incident with Akfel Holding signals worrisome prospects for yet another gas dispute in the coming year between Turkey and Russia, which seeks support from Turkish authorities in implementing the “Turkish Stream” project.

In this volatile context, any potentially conflicting situation — especially one of the magnitude of the ambassador assassination — should be handled with care. The crisis diplomacy that Erdogan carried out with Putin in the first few hours was a successful case for such behavior. But this may turn out to not be enough if all kinds of negative signals continue to be sent from one capital and picked up and get fomented in the other.

So far one aspect of this incident that looked especially promising was the people-to-people dimension. An overwhelming majority of Turkish people sent their condolences and expressed sympathies to the Russian diplomatic corps and Foreign Affairs Ministry in Moscow as well as to Russian friends and colleagues. A few hours into the tragedy, the hashtag #TurkishPeopleLoveRussia became the fourth-most popular on the Turkish segment of Twitter. Hopefully, the investigation by the joint Russian-Turkish Commission will arrive at adequate and fair findings to avoid the people of the two states paying the highest price for yet another misfortune in their bilateral relations.