Few people in Turkey are entertaining the possibility that the killing of Russian Ambassador Andrei Karlov by an off-duty police officer was a "lone wolf" attack. 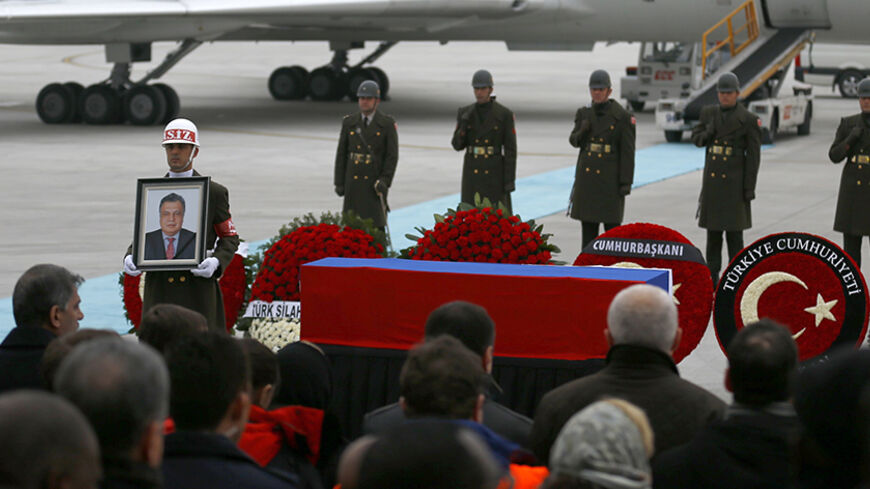 The flag-wrapped coffin of the late Russian Ambassador to Turkey Andrei Karlov is carried to a plane during a ceremony at Esenboga International Airport in Ankara, Dec. 20, 2016. - REUTERS/Umit Bektas

What we know so far about the episode is as follows: Karlov habitually liked to blend in with local folks and therefore seldom traveled with a large security team. Thus, he was at grave risk when he attended a Russia-themed photo exhibit at an art gallery across the street from the US Embassy in Ankara’s upper-class district of Cankaya. Altintas, 22, who was serving with a riot police squad in the Turkish capital, was able to enter the gallery with a pistol because he had his official ID card. Karlov reportedly had no bodyguards inside the venue.

In a harrowing photograph taken immediately before Altintas shot Karlov, the two men appear in the same frame. Video footage shows Altintas yelling at terrified onlookers to “not forget Aleppo" and to "not forget Syria,” after citing a religious poem used by the extremist group Jabhat al-Nusra, in which the reciter pledges loyalty to the Prophet Muhammad and vows to engage in jihad. The killer apparently thought that by shooting an unarmed man in the back, he would avenge the death of Syrian civilians in Aleppo at the hands of the Russian-backed Syrian regime.

The episode, which came in the wake of a string of terror attacks in the ongoing fight between the Turkish government and the Kurdistan Workers Party, raises unpleasant possibilities about the future of Turkey.

Especially troubling are comments by certain media outlets and government officials blaming everyone but the Turkish state — be it the United States and Gulenists, or even the Russian Embassy’s security team. For example, the pro-government daily Yeni Akit called the United States “an enemy that looks like a friend” for “harboring” Pennsylvania-based Turkish preacher Fethullah Gulen. Turks from across the political spectrum believe Gulen’s followers in the Turkish state were behind the July 2016 coup attempt to topple the government of President Recep Tayyip Erdogan and his Justice and Development Party (AKP).

High-ranking AKP official Burhan Kuzu’s remarks were equally strange. Kuzu, a professor of constitutional law and influential voice in the party, said in a televised interview, “Let’s put our own laxness aside, but why didn’t the Russians have their own protection?” Under the Vienna Convention, a host country is solely responsible for protecting diplomats and diplomatic compounds.

Beyond these ham-handed responses, the ambassador’s assassination raises frightful prospects for Turkey. For one, it is still not clear whether Altintas acted as a “lone wolf” or whether there are other potential radicalized attackers within the Turkish military and security services who could wreak similar havoc in the days ahead. Furthermore, official Russian statements, while conciliatory, have also been vaguely threatening, making it clear that Moscow expects Ankara’s full cooperation in the investigation and also over Syria.

At a time when Turkey faces troubles at home and in the region and its relations with NATO allies are at an all-time low, one wonders whether Moscow could use its ambassador’s death to pull Ankara further away from the West.