With an eye on the March elections, the Turkish government, under the lead of the Justice and Development Party, is providing citizens with relief from credit card debt — a move the opposition deems bribery. 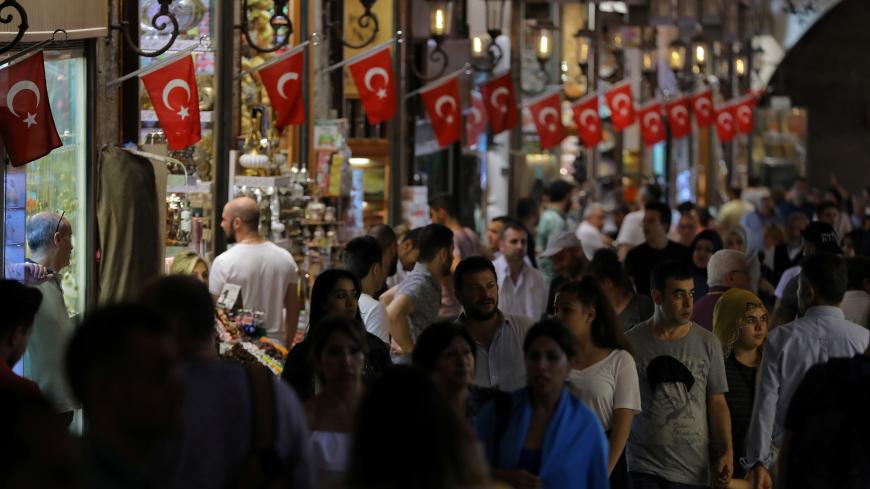 Years of aggressively marketed credit have led Turks to run up debts that are reported to amount to a staggering 100 billion Turkish liras, around $18.3 billion, nationally.

Individuals’ financial troubles are likely to be a major factor in the local elections on March 31, with inflation running at 20% and unemployment at 11%. Turks tend to use municipal elections as an opportunity to give the government a warning, voting less cautiously than they do in parliamentary and presidential polls.

The plan, announced by President Recep Tayyip Erdogan, enables Turks to go to the state-run Ziraat Bank and apply for debt rescheduling at low rates of interest. “Any retail client from any bank can apply,” Erdogan said.

The paper referred to Erdogan’s promise that the state will pay the first 80 liras of electricity bills for those consumers who receive social assistance. The subheadline read: “Erdogan’s bribe for the election: Credit card debts have been transferred to the state and 2.5 million people will get free electricity.”

The opposition paper Sozcu, which ranks third in national sales, emblazoned its front page with the headline: “Election lottery.”

More perceptively, Sozcu columnist Murat Muratoglu analyzed the debt relief in words that deserve to be quoted at length because they help explain why Erdogan and his Justice and Development Party (AKP) have won election after election since they first came to power in 2002.

“A party that has been in power for the past 16 years has produced news about credit card debt just three months before the elections. What does this mean in plain Turkish? It means it’s an election bribe. Nobody asks why these people cannot pay their debts. Nobody produces a long-term solution. Now the election is coming and if [the government] doesn’t distribute money, it will be buried in the ballot boxes.

Erdogan indicated today how much he fears the economy’s impact on voters when he gave a long defense of his government’s record on inflation. Speaking to a gathering of municipal administrators in the presidential palace, Erdogan recounted the inflation rate for every year of the 13 years before he came to power, and named the parties in government during those years.

“The main opposition party says that the highest inflation rate has been seen during the AKP period in power,” he said, referring to the Republican People’s Party (CHP). “You cannot get rid of the garbage and potholes if the policies and the local administrations are founded on lies.”

In fact, the CHP had not accused the AKP of exceeding the inflation rates of the 1980s and '90s. On Jan. 3, CHP spokesman Faik Ozturk told reporters, “The AKP finished 2018 with consumer inflation of 20.3%, the highest since 2002.” And a glance at the records of annual inflation would confirm what Ozturk said. (In 2002, when the AKP came to power in the November elections, annual inflation was 29.8%.)

A photoshopped image circulating on Turkish social media shows a man dressed only in his underwear at a post office counter. He goes through what he has just paid for — “electricity, water, natural gas, special tax, income tax” — and then asks the teller, “Do you want my underwear as well?”

The teller, who is Finance Minister Berat Albayrak, Erdogan’s son-in-law, replies with a smile: “No, if we take them now, you won’t vote for us. God willing, we’ll take them after the elections.”

Separately, on Wednesday, the alleged leader of the Gulenist gang that is accused of assassinating the Russian ambassador in 2016 told a security court in the Ankara Palace of Justice that he did not order the killing and was not a member of the Gulenist organization.

Testifying via video link from a prison in Tarsus, Salih Yilmaz said, “I deny all the charges. I have not been involved in anything to do with the assassination of Ambassador Karlov.”

Yilmaz said his previous statements were given “under pressure."

Andrei Karlov was shot dead Dec. 19, 2016, while giving a speech at an art exhibition in Ankara. The assassin, Mevlut Mert Altintas, was an off-duty policeman who posed as a security guard to enter the gallery and stood behind the ambassador.

After the shooting, Altintas shouted “God is great!” and “Don't forget Aleppo!” — a reference to Russia’s involvement in the Syrian civil war. Pictures taken by the Associated Press photographer Burhan Ozbilici showed Altintas pointing his pistol at other attendees of the exhibition to keep them at bay, and at one moment pointing his finger to the ceiling in a gesture that could have been a sign of Islamic militancy.

Minutes later he was killed in a shootout with Turkish police. Moscow and Ankara condemned the assassination as an attempt to wreck relations, which had been recently repaired after Turkey shot down a Russian plane near the Syrian border in 2015.

The case has taken two years to come to trial. When it opened on Tuesday, 14 defendants were in the dock and another four were connected to the court by video from prison.

Ten accused are fugitives from justice. Foremost among them is Fethullah Gulen, the Islamic cleric who lives in Pennsylvania and is accused of ordering the attempted coup of July 15, 2016. Gulen has denied any role in either the abortive coup or the ambassador’s killing.

In the initial proceedings, defense lawyer Adem Kaplan objected that when he consulted his clients in Ankara’s Sincan prison, the conversation was recorded. Judge Husamettin Otcu told him to ask the prison warden for a consultation room where privacy would be respected.

The first four defendants testified that while they went to the Izmir police academy at the same time as Altintas, they were not Gulenists. Bilal Dereli said he applied three times to join the police force before he was successful. “If I had a link [to Gulen], I would have succeeded immediately," he said in a clear reference to the Gulenists’ alleged infiltration of the civil service.