Public opinion polls show that economic problems have climbed to the top of the Turkish public’s concerns and electoral support for the ruling party is on the decline ahead of municipal elections in March. 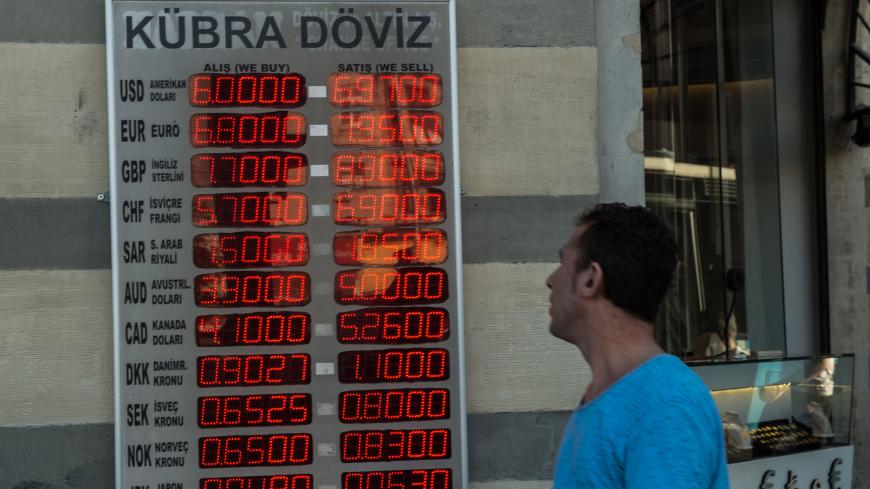 People walk past a board indicating currency values outside a currency exchange office in Istanbul, Turkey, Aug. 13, 2018. - /AFP/Getty Images

Turkey’s economic turmoil, fueled by a currency crisis amid unprecedented tensions with the United States last summer, has become the No. 1 concern of Turkish voters ahead of local elections on March 31. Two recent opinion polls suggest economic woes will sway the outcome of the elections, with the state of the economy and unemployment topping the list of what people see as the country’s primary problems.

In parallel, the surveys point to a decline in popular support for President Recep Tayyip Erdogan’s Justice and Development Party (AKP), in power since 2002. The AKP is contesting the local elections in partnership with the Nationalist Movement Party (MHP), which was its electoral ally also in last year’s presidential and parliamentary polls. The question now is whether the AKP could change the popular focus on the economy or make up for the loss of votes with MHP support.

In the first opinion poll, conducted by the Potsdam Institute for Applied Research in mid-January, the economy, unemployment and Syrians were the three top answers that respondents gave when asked what they saw as “Turkey’s most important problem.” According to the results, 34.5% saw the economy as the country’s top problem, followed by 14.6% who singled out unemployment. Remarkably, the issue of Syrian refugees rose for the first time high on the list, with 12.6% of respondents identifying Syrians as the country’s most important problem.

The respondents were also asked which party they would back if parliamentary elections were to be held next Sunday. After a proportional allocation of 13.8% of undecided, the AKP got 35% — well below the 42.56% it mustered in the 2018 elections. The main opposition Republican People’s Party (CHP) came in second in the survey with 25.9%, followed by the MHP with 13.6%, the Good Party — created in 2017 by MHP defectors — with 12.1% and the pro-Kurdish Peoples’ Democratic Party (HDP) with 11%.

Another opinion poll, conducted by research company Optimar in late December and early January, turned up similar results. The head of the company, Hilmi Dasdemir, told Sputnik that economic problems topped the concerns of the electorate. “According to the latest figures, 35% believe the economy is the most important problem and 27% believe it is unemployment. In other words, the solution of economy-related problems is a priority for 62% of the people,” he said.

The Optimar survey also reflected a decline in the AKP’s popular support. Asked which party they would vote for in the March 31 local elections, 32.5% of respondents expressed support for the AKP. The ruling party was followed by the CHP with 20.4%, the Good Party with 5.5%, the MHP and the HDP with 5.4% each, and the Islamist Felicity Party with 1%. Another 1.2% picked “other parties,” while 27% said they remained undecided.

Commenting on the results of the surveys, CHP spokesman and former treasury undersecretary Faik Oztrak told Al-Monitor, “The people are experiencing the economic turmoil in the form of higher prices. We expect the economic contraction to sway the choices of voters. It is time for the people to show a yellow card to the ruling party.

According to Oztrak, the government could try to distract the electorate from economic woes by the way of military operations at the Syrian border. “This could affect some voters, but I think it is too late now to change the economic agenda of the people,” he said.

The CHP official pointed also to the shift in global financial trends, noting that Turkey no longer enjoyed abundant inflows of foreign funds and cheap hard currency. “The AKP was able to stay in power that long because they seized on a period of global dollar abundance. But now money is returning to safe harbors. They can hardly cover up their mistakes now,” Oztrak said.

What the government is basically trying to do at present is to “enable people to take on debt to roll over debt,” he said, likening the government’s measures to “aspirin or wound dressing” aimed at “keeping the economy going until the elections.”

In remarks to Al-Monitor, Good Party deputy chair Durmus Yilmaz, a former Central Bank governor, observed the economy had been the people’s primary concern for almost a year. He doubted, however, that all popular frustration would translate into electoral losses for the AKP.

Referring to the loan bonanza that Turks enjoyed until recently, Yilmaz said, “Access to credit has become easier over the past decade. Borrowers proliferated even in villages, and people became guarantors to each other. There are now cross linkages, where the payment difficulty of one person will cause difficulty for another. Hence, those people might not want the system to change, regardless of how much hardship they face. They could ultimately back the continuation of the status quo despite knowing they will suffer. But, such people aside, those who [feel the impact of] inflation are a different case. The developments might bring about a political awakening.”

For Yilmaz, the government’s effort to ease the impact of the downturn through tax reductions and incentives is nothing more than “an attempt to defer” the existing problems, which, in fact, are "further deepening the troubles of the economy.”

HDP deputy chairman Ayhan Bilgen agreed the economy had become the most pressing problem of the people, “be it under the title of inflation, unemployment, unfair income distribution or corruption.” Speaking to Al-Monitor, he said, “The government is trying to cover this up and distract the public through perception operations and by creating tensions in foreign and domestic politics. Yet people are [personally] experiencing [the economic turmoil]. There is no way it will not bear on the ballot boxes.”

Like other representatives of the opposition, Bilgen suggested the government would seek to gloss over the gravity of the problems until the elections, adding that he saw the prospect of an austerity deal with the International Monetary Fund after the polls.

Until not long ago, “terrorism” was the problem that topped the list of popular concerns. A 2017 survey by the Center for Turkish Studies at Istanbul’s Kadir Has University, for instance, found that 29% of the public saw “terrorism” as Turkey’s most important issue, followed by the need to combat Gulenists — who were held responsible for the botched coup attempt in 2016 — with 18.1% and unemployment with 17%.