The recent meeting between Russian President Vladimir Putin and Turkish President Recep Tayyip Erdogan in Azerbaijan appears to reflect a mutual irritation between the two parties. 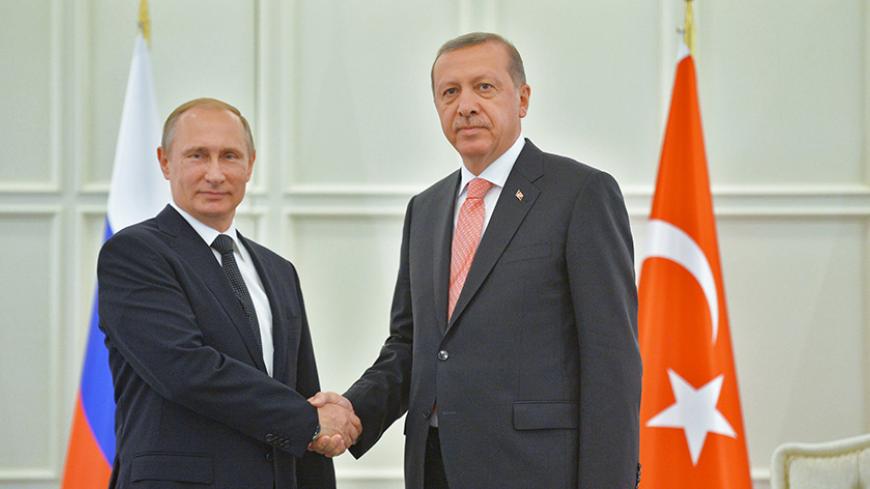 While observers often focus on Russian President Vladimir Putin’s foreign policy successes — such as Moscow’s largely bloodless seizure of the Crimean Peninsula and its improving position in the Middle East — the Kremlin leader makes his fair share of mistakes. Some of them can even be quite costly, like the overconfidence in eastern Ukraine (following a relatively easy victory in Crimea) that has trapped Putin in a complex quagmire. Others look significant but might be correctable, such as Putin’s apparently casual attitude toward an important strategic opportunity in Russia’s relations with Turkey.

Broadly speaking, Russo-Turkish relations have improved significantly in recent years as trade has expanded. At the same time, Putin and Turkish President Recep Tayyip Erdogan have managed to compartmentalize differences over Syria and some other issues. Long-standing tensions in Turkey’s on-again off-again contacts with the European Union and its frequent differences with Washington haven’t hurt either.

With this generally favorable context, Putin assembled a large and impressive group to meet with Erdogan on June 13 in Baku, Azerbaijan, where each was attending the opening ceremonies of the First European Games. Putin’s delegation included his top Kremlin foreign policy aide, Ambassador Yuri Ushakov; Foreign Minister Sergey Lavrov; his influential press spokesman, Dmitry Peskov; Energy Minister Alexander Novak; and the heads of Gazprom and Russia’s state nuclear energy firm, Rosatom. Governments don’t typically do this unless they want — and expect — to make something happen.

Nevertheless, the Kremlin’s official report on the meeting noted only what the two men discussed — gas and nuclear deals, Turkey’s elections, the games — not what they agreed on or decided. Indeed, Peskov characterized the talks only as “very good, detailed and constructive.” In international diplomacy, words like “detailed” and “constructive” often follow difficult meetings rather than good ones — especially when officials don’t share much else. Few details have emerged from the conversation beyond Gazprom CEO Alexey Miller’s proposal for meetings between Russian and Turkish “experts” to discuss the Turkish Stream pipeline, which implies that important issues remain unresolved.

From this perspective, it is perhaps notable that the Kremlin’s account of Putin’s meeting with Miller just two days after the session with Erdogan makes no reference to Turkey. In fairness, like most reports about Putin’s appointments, the transcript covers only the first portion of the meeting but makes clear that their conversation continued. Yet, it seems likely that if Moscow wanted to highlight the trip, Putin had a natural opportunity to do so.

Indeed, Russian press accounts suggest that the meeting began quite poorly and, indeed, awkwardly. According to Kommersant, Putin and the rest of his delegation did not arrive on time for the discussion, leaving a surprised and “very grim” Erdogan on his own. Worse, a telephone call reportedly revealed that the Russian president had not yet left his own hotel to travel to the Four Seasons Hotel, where Erdogan was waiting. Though Lavrov and a few others soon appeared, Erdogan appeared to reporters to be uninterested in conversation. According to the Russian press account, “For the Russian minister, it did not appear important whether the Turkish president answered him or not.” Erdogan eventually left the room, with a journalist describing the scene as “completely scandalous.” Only a short time later did Erdogan return, with Putin appearing “three minutes” after. Erdogan greeted Putin without smiling, and even after the two presidents took their seats, neither “said a word.” Putin did not seem to have “experienced any discomfort,” however, and Peskov later gamely explained that their silence “was not connected with any tension in their relationship, or any problems,” but instead reflected the fact that Erdogan “almost never says anything during protocol meetings” before the press.

With this beginning — all transpiring in front of the assembled press — few would expect the closed portion of the meeting to go well absent a compelling Turkish dependence on Moscow (which does not exist). Moreover, Turkish press accounts state that Erdogan handed Putin a report detailing “systematically practiced” human rights violations against Crimean Tatars in Russian-occupied Crimea. Given Putin’s attitude toward Western criticism of Russia’s human rights practices, this seems unlikely to have improved the atmosphere.

While Putin may no longer feel particular “discomfort” at keeping people waiting — as he has a reputation for — it does not appear to be the best strategy for dealing with significant potential partners like Erdogan. It is especially difficult to understand when Russia’s president could not have had too many other obligations in Baku, since few heads of state were present. (In fact, Erdogan complained to Putin that no EU leaders had attended the opening ceremony.) Why irritate Turkey’s president needlessly just a few days after being among the first to congratulate him on his party’s performance in parliamentary elections? Conversely, if Putin himself felt annoyed in some way, possibly due to Erdogan’s recent criticism of his reference to the Armenian genocide, why make the congratulatory call the day after the election rather than waiting or not phoning at all?

With Russia’s stagnant economy and constrained diplomatic and commercial opportunities, Turkey seems like a genuine opening for Moscow to increase its regional influence, boost trade earnings and pursue security objectives in the Middle East. At the same time, since Moscow and Ankara do have some significant differences, achieving these goals will be neither automatic nor easy despite mutual interests and maybe even a few shared frustrations. In these circumstances, Putin’s apparent indifference to Erdogan’s pride is especially striking — all the more so since Russia’s president is clearly a proud man himself.