Following Turkey's purchase of the Russian S-400 anti-air missile system, Moscow and Ankara are looking to expand the bilateral cooperation in trade and military fields. 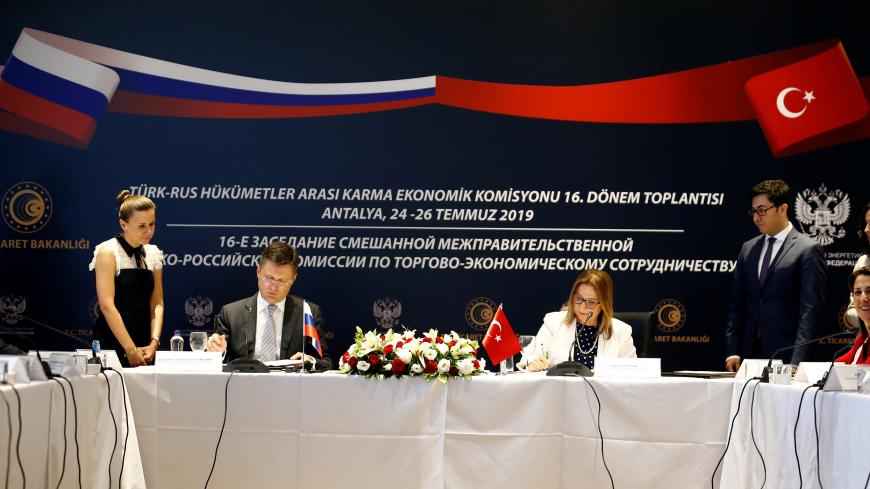 The Turkish Mediterranean resort city of Antalya hosted July 26 the 16th meeting of the Turkey-Russia Joint Economic Commission. Three major questions were discussed at the meeting.

First, the sides agreed to boost economic cooperation. Moscow and Ankara’s bilateral trade should reach the target of $100 billion “as soon as possible,” Turkish Trade Minister Ruhsar Pekcan said at the joint meeting with the Russian delegation. “There is a serious potential between our countries; the governments are ready to provide all support to business people," she stressed.

According to Pekcan, relations between the two countries are becoming very close. She said, “The proof of this is the fact that despite the decline in global trade the level of trade between Turkey and Russia continues to grow. Russia with its energy resources has great potential and is one of the most important economies in the world. Our countries really complement each other."

“The leaders of our countries set an ambitious task to boost trade turnover to $100 billion,” Alexander Novak, Russia’s energy minister, said. “The upside for mutual investments is in such spheres as space, pharmaceuticals and digital technologies, in addition to traditional industries such as agriculture, construction, metals and energy.”

Both countries also agreed to launch an online platform for the business sector. Head of the Russian-Turkish Business Council Ahmet Palankoev noted that the platform would be used to promote the interests of Russian companies in Turkey.

Cooperation in the energy sphere was the second important issue discussed in Antalya. The parties discussed not only two mega projects — the construction of the Akkuyu nuclear power plant and the TurkStream gas pipeline — but also a possible cooperation in the offshore Mediterranean.

“Russian companies have successfully implemented energy projects in the Mediterranean Sea. For example, Rosneft is working at Zohr gas field in Egypt. If these projects benefit all the parties from a commercial point of view, Russian companies can decide on cooperation with Turkey in the East Mediterranean,” Novak said.

Recently, Ankara has ran into a conflict with the European Union (EU) as well as with Cyprus and Greece over the exploration of gas reserves in the offshore Mediterranean. Tensions have escalated sharply after the discovery of gas reserves off Cyprus. EU officials have claimed that Turkey is acting illegally by drilling for gas in the waters off Cyprus.

In addition, the representatives of both countries discussed the widening of cooperation in the military sphere. Moscow and Ankara are discussing prospects for joint production of helicopters as well as Sukhoi Superjet 100 and MC-21 airliner.

“We are discussing deliveries of helicopters and creating a joint venture on producing a helicopter,” Novak said in an interview with Russian media. “In the future we will focus on our aviation industry, particularly on joint production and deliveries of the Sukhoi Superjet 100 and MC-21 airliner.”

The discussion of possible military cooperation with Moscow is taking place while Ankara is engaged in a serious conflict with its traditional NATO ally the United States over its purchase of the Russian S-400 anti-air missile system. Last week, US authorities warned Turkey that they were removing it from its F-35 fighter jets program. On July 26, speaking at a gathering of the Justice and Development Party in Ankara, President Recep Tayyip Erdogan said that Turkey will turn elsewhere for fighter jets if the United States does not sell it the F-35 aircraft.

The day before the meeting of the intergovernmental commission, on July 25, Russian President Vladimir Putin signed a decree lifting a number of economic sanctions against Turkey. The decree — called “On the abolition of some special economic measures against the Turkish Republic” — implies that Turkish citizens who carry “service or special passports (green and gray)” can come to Russia without visas. Nevertheless, holders of biometric passports (red) still need to apply for a Russian visa.

Erdogan welcomed Russia’s decision. “The Russian move allowing visa-free travel for Turkish citizens is a result of warm relations and dialogue,” he said, speaking at a joint press conference with the Malaysian prime minister.

A visa scheme for Turkish citizens was introduced as part of a sanctions package at the end of 2015/early 2016 following Turkey's downing of a Russian jet. Those measures included a ban on charter flights from Russia to Turkey and a ban on the import of certain Turkish goods including many fruits and vegetables. The activities of a number of Turkish organizations and businesses operating in Russia were restricted, and Russian companies were banned from hiring Turkish employees. The government also “advised” Russian travel agencies to stop selling tours to Turkish resorts. Starting on Jan. 1, 2016, Moscow introduced visa restrictions for Turks, who since 2011 had been able to enjoy visa-free stays of up to 30 days.

In Russia, members of parliament and some experts welcomed Putin’s decree.

“This decision means that Russia has always a flexible approach to relations with its partners, unlike the United States that has imposed sanctions for decades,” Vladimir Dzhabarov, first deputy chairman of the International Affairs Committee of the Federation Council, said. “Ankara has proved to be a reliable partner of Moscow."

According to Victor Nadein-Raevsky, a renowned Russian expert on Turkey, Russian-Turkish relations have fully recovered following the 2015 jet crisis.

“The locomotive is agriculture. It is not at all correct to assume that we are mostly consumers of Turkish agricultural products,” Nadein-Raevsky, who is a senior research fellow at the Institute of World Economy and International Relations of the Russian Academy of Sciences, said. He argues that the Russian export of agricultural products to Turkey has always been more significant and extensive, mainly due to wheat. Turkey is the second consumer of Russian wheat after Egypt. In addition, 60% of Turkey’s natural gas consumption comes from Russia “and a little less oil,” according to Nadein-Raevsky.

“All these steps strengthen the mutual positions of both countries in trade,” he concluded.