Why Russia isn’t rushing to lift sanctions on Turkey

Russia appears to be in no hurry to remove all of its sanctions against Turkey, even though it’s been a year since they were imposed. 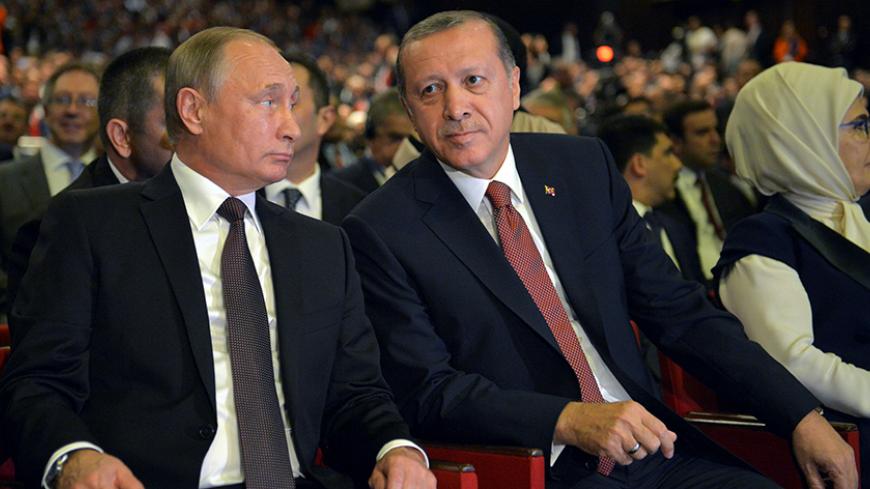 For a long time, Russian-Turkish relations were based on a certain formula: “The economy is the economy. Politics is politics. And they shouldn’t be mixed.” This formula worked successfully until Nov. 24, 2015, when Turkey shot down a Russian jet.

Relations between the two countries, which used to be friendly

and were even described as “a strategic partnership,” were severely damaged in just one moment.

A year later, on Dec. 5-6, Turkish Prime Minister Binali Yildirim will visit Moscow to meet with his Russian counterpart Dmitry Medvedev and President Vladimir Putin. The visit could help accelerate the ongoing normalization process between two countries. The main agenda of the Yildirim-Medvedev meeting will include economic cooperation between the two countries. But Russia seems to feel no urgency in the matter.

Last year, Turkish authorities said they were well within their rights to protect the country’s borders when Moscow violated Turkish airspace. Russia had a different opinion. Putin described the incident as a "stab in the back" committed by "accomplices of terrorists.” As a result, Moscow had to reconsider the “never the twain shall meet” formula. In retaliation for Turkey shooting down its plane, Russia imposed economic sanctions. The period of separating politics and the economy was officially over.

Russia banned the import of certain Turkish products, and a number of Turkish organizations and businesses operating in Russia were restricted. The product ban included many fruits and vegetables as well as chicken, carnations and salt. In another round of sanctions, the government introduced a ban on charter flights to Turkey — the most popular travel destination for Russians — and “advised” Russian travel agencies to stop selling tours that went there. Moscow also introduced visa restrictions for Turkish citizens, who since 2011 had been able to enjoy visa-free stays of up to 30 days. Moreover, Russian companies were banned from hiring Turkish employees.

“For Russia, the anti-Turkish embargo is less problematic than counter-sanctions against the EU countries,” Rodionov said. “Turkish goods have been replaced by either deliveries from other countries or re-export from the Eurasian Economic Community countries,” mainly Belarus and Kazakhstan.

On June 27, the Turkish president surprised many by sending an apology letter to Putin. Two days later they spoke by phone. The Russian leader promised to lift sanctions soon. In reality, only the ban on charter flights was lifted, and that wasn’t done immediately — it took two months. Thus, when the ban was lifted Aug. 28, most Russians had either already taken their vacations or made plans to take them elsewhere.

More economic sanctions were lifted after Putin’s visit Oct. 9 to Istanbul. Some fruits were removed from the banned list, yet many others remained. Some sanctions also remain in place — the restrictions on visas and on hiring Turkish nationals. Not only has Russia not fully lifted them, it doesn’t appear Russia plans to do so anytime soon.

On Nov. 18, Russian Agriculture Minister Alexander Tkachev met with his Turkish counterpart, Faruk Celik, in Sochi on the sidelines of an international agriculture fair that drew large delegations from both countries. The parties discussed the process of lifting agricultural sanctions. But after the meeting, Russia said it would continue to ban Turkish tomatoes for the next two to three years. According to the ministry, this step will help Russian tomato producers become more competitive.

“For many years, Turkish tomatoes were dominant on Russian market. After the jet crisis and the economic sanctions against Turkey, Russian producers made huge investments in tomato production. Now it is essential that they don’t lose their money,” Georgy Petrov, vice president of the Chamber of Commerce and Industry of the Russian Federation, told Al-Monitor.

Turkish businessmen who spoke with Al-Monitor still hope that the other sanctions will be lifted soon and that their companies can return to work in Russia.

“We want to continue to work here [in Russia]. We have been here for more than 20 years. There have been ups and downs. However, we are still here. Russia is a huge market for us. The recent sanctions were politically motivated,” said one of them.

Petrov denied that the sanctions have been maintained for political reasons.

The Russian Ministry of Economic Development confirmed that the Russian government isn’t currently considering urgent plans to remove the sanctions. A source in the ministry told Al-Monitor on condition of anonymity: “We haven’t yet received any instructions regarding further lifting of restrictions and sanctions.”

The result of the meeting next month could show whether Turkey and Russia can resume their old approach to relations by not mixing economic and political issues. It seems unlikely that — given the recent crisis that has hung over their relations for a year — things will ever return to that status completely. But it also seems unlikely that the approach will never be used again.

The reality is that during a seven-month absence of Turkish businesses on the Russian market, local and foreign producers have taken their place. Therefore, it seems that Russian-Turkish relations have found a new approach: sound pragmatism. The two countries will partner with one another on international issues where their interests coincide. But Moscow is in bad need of economic and investment opportunities, as the country is facing hard times over Western sanctions as well as low oil prices.

In seeking a balance between economic needs and political interests, Russia needs a foreign policy of “new pragmatism” as never before.