The Russian Defense Ministry slammed Israel on Feb. 7 for what the ministry considered a provocation in the skies over Syria. 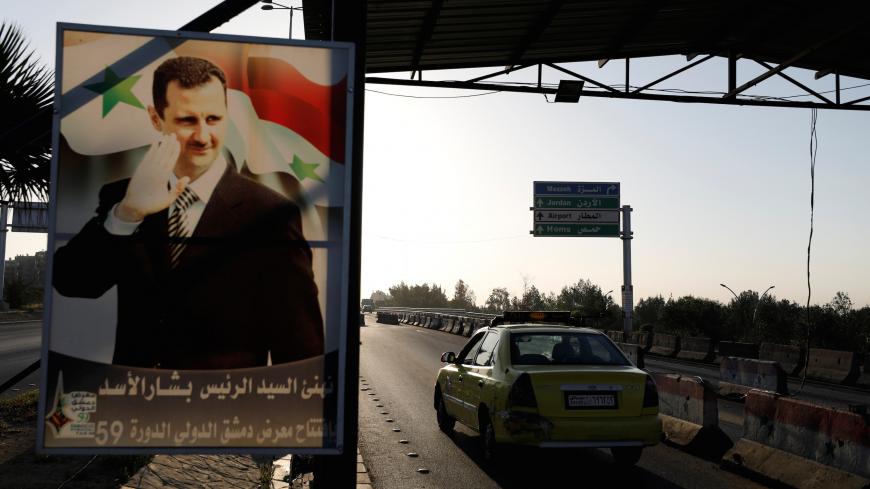 A poster of Syrian President Bashar al-Assad is seen on the main road to the airport in Damascus, Syria, April 14, 2018. - REUTERS/Omar Sanadiki

The Russian Defense Ministry slammed Israel on Feb. 7 for what it considered a provocation in the skies over Syria. In the early hours of Feb. 6, while operating from neutral airspace, Israel carried out strikes on Damascus’ suburbs at a time when a civilian Airbus 320 carrying 172 passengers was preparing to land at the airport in the Syrian capital. The Syrian military enacted its missile defense systems to repel the strikes.

"Only thanks to the prompt actions of dispatchers at Damascus airport and the effective work of the automated system of monitoring air traffic, the Airbus 320 was escorted out of the danger zone and assisted in successfully landing at an aerodrome at the Russian air base Khmeimim," Russian Defense Ministry spokesman Igor Konashenkov told reporters Feb. 7.

While Russian authorities said the flight had come from Tehran, Iran, it was later reported that the flight appeared to have traveled from the Iraqi city of Najaf and was operated by the private Syrian airline Cham Wings, which is subject to US sanctions.

Why it matters:  Russia’s Defense Ministry bears a heavy grudge against its Israeli counterpart over the downing of a Russian reconoissance aircraft in September 2018 by the Syrian air defense system. Israeli jets had been carrying out raids on Iranian targets in Syria, and Moscow says the Israelis didn't give the Russian military enough warning, leading to the Russian aircraft being downed in the mixup. At the time, the Russian military considered the Israeli manuevers as dangerous provocations that put the lives of Russian servicemen at risk and eventually led to their deaths.

"The Israeli General Staff's military air operations using passenger jets for cover or [for] blocking of retaliatory fire by Syrian missile systems is becoming a typical trait of the Israeli air force," Konashenkov said, commenting on the latest incident — a clear allusion to the past event that put Russian-Israeli ties to the test.

The new Russian-Israeli spat comes amid a warming up in bilateral relations in the last few weeks. Russian President Vladimir Putin visited Israel in late January for the World Holocaust Forum and the the unveiling of a monument to those who perished during the siege of Putin’s native Leningrad (now St. Petersburg). Israeli Prime Minister Benjamin Netanyahu traveled to Moscow a few days later while en route from Washington to court Putin on US President Donald Trump’s peace deal.

The fine print:  Putin’s visit to Damascus in early January was, among other things, meant to show the significance the airport there will need to play in Syria’s restoration and return to normal. In 2019, Bahrain’s Gulf Air and the United Arab Emirates' Etihad stated their intent to review the possibility of resuming flights to Damascus. Some Russian businesses expressed their own interest in investing in the construction of some terminals. Previous reports suggested that Moscow even asked Israel to halt its strikes on the airport in exchange for limiting the supply of Iranian cargo to Syria via the airport.

What’s next:  There are at least two angles from which the Russian reaction can be interpreted. First, the resentment the Russian military expressed in public is most likely aimed at the domestic constituency as well as Syrian and Iranian allies. Other than sending stern warnings, there is little Moscow can do to stop Israeli strikes on its tactical allies without slipping into its own escalations with Israeli forces.

Know more:  Stay in the know on the latest regional moves by Russia and Israel with Al-Monitor’s Russia-Mideast Pulse and Israel Pulse.