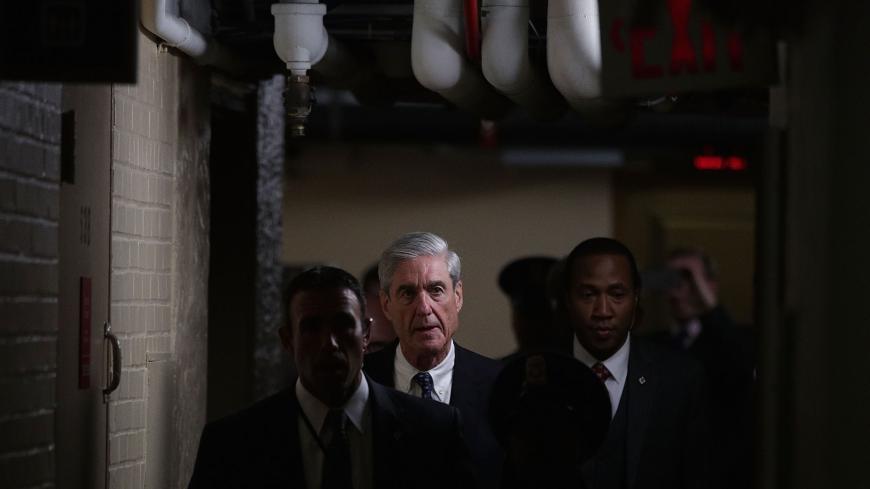 Special Counsel Robert Mueller (C) leaves after a closed meeting with members of the Senate Judiciary Committee at the Capitol in Washington, June 21, 2017. - GETTY/Alex Wong

George Nader, 58, traveled to Moscow in 2012, telling Russian interlocutors that he represented Iraqi Prime Minister Nouri al-Maliki and the deal should be negotiated through him, according to two Iraqi sources. Nader’s role in the deal was controversial to Iraqi officials because Iraq’s minister of defense was in Russia to conduct the negotiations, and they were unaware that Maliki was working with Nader to bypass official channels.

One of the Iraqi sources, a former Iraqi official who spoke to Al-Monitor on condition that he not be named, personally witnessed Nader’s interactions with Maliki in their Moscow hotel when he accompanied Maliki to Moscow in October 2012 to sign the arms deal with Russian President Vladimir Putin.

Nader’s career as a deal broker in Iraq ran from the mid-2000s until Maliki left office in 2014, the Iraqi sources said. Nader then became an adviser to the powerful Abu Dhabi Crown Prince Mohammed bin Zayed Al Nahyan. It is in that capacity that Nader’s meetings with members of the incoming Donald Trump administration in 2016-17 — including Trump's son-in-law Jared Kushner, former national security adviser Michael Flynn and former chief strategist Steve Bannon — brought Nader to Mueller’s attention.

The New York Times reported Tuesday that Nader was arrested and questioned by the FBI when he landed at Washington Dulles International Airport on Jan. 17 en route to celebrate Trump’s first year in office at Mar-a-Lago in Florida. He was questioned by Mueller’s grand jury March 2 and is reported to now be cooperating with Mueller’s probe. One line of inquiry Mueller is reported to be questioning Nader about is whether the United Arab Emirates (UAE) might have funneled money to members of the incoming Trump administration in an effort to curry influence with them, including in their dispute with Qatar.

From journalist to dealmaker

Nader’s recent career as a Middle East deal broker is both an outgrowth and departure from his past. As an editor of Middle East Insight magazine in Washington in the 1980s and 1990s, Nader interviewed President Bill Clinton and Iranian Supreme Leader Ayatollah Ruhollah Khomeini.

During this time, Nader also served as a frequent go-between in informal Syrian-Israeli talks encouraged by the Clinton administration before abruptly disappearing from the Washington scene around 2000.

“He was a reliable go-between, a facilitator,” Martin Indyk, who knew Nader when Indyk served as Clinton’s assistant secretary of state for Near East affairs and ambassador to Israel in the 1990s, told Al-Monitor. “He was not a con man.”

Nader was connected to the Hafez al-Assad regime through then-Syrian Foreign Minister Farouk al-Sharaa and then-Syrian Ambassador to the United States and current Foreign Minister Walid Moallem, Indyk said. “He was going to Israel from time to time. He set up an interview of [Syrian Foreign Minister al-Sharaa] with Israeli journalist Ehud Yaari as a confidence-building measure. George is the one that made that happen. … Then he hooked up with [Ron] Lauder. He traveled with Lauder 16 times to Damascus in 1998” in efforts to advance an Israeli-Syrian peace agreement.

“And then when the Clinton administration was gone, George was gone,” Indyk, now executive vice president of the Brookings Institution, said.

“Last time I heard from [Nader] was after the US invasion of Iraq,” journalist Hisham Melham told Al-Monitor. “He called me from Kurdistan. But why would MBZ [the crown prince] need him when he has [UAE Ambassador] Yousef Al Otaiba?”

From dabbling in Syria-Israel peace talks to Iraq postwar dealmaker

Nader appeared in Iraq in the mid-2000s, looking to translate his Rolodex of connections from his Middle East Insight days into work advising various Iraqi political clients, including some of Iraq’s new Shiite political leaders, as well as Kurdish officials.

According to Iraqi sources, Nader helped arrange meetings for the 2005 visit to Washington of leading members of an Iraqi Shiite political party with close ties to Iran, the Supreme Council for the Islamic Revolution in Iraq. In 2010, Nader similarly arranged meetings for then-Iraqi Kurdistan Regional Government (KRG) Prime Minister Nechirvan Barzani with high-level UAE officials, including the crown prince, a second Iraqi source now living in exile told Al-Monitor. But Nader failed to win over the KRG leader, the second Iraqi source said.

“Nader got Nechirvan Barzani meetings with MBZ and [Lebanese Prime Minister] Saad Hariri,” the second Iraqi source said, adding that he advised Iraqi Kurdish interlocutors at the time to be wary of Nader.

Nader had a “knack for claiming that he had unique access to 'mysterious' persons,” the second Iraqi source said. “This way he would be able to latch on from one new confidant to another.”

By 2012, Nader had forged close ties with the Iraqi prime minister and Maliki’s son and deputy chief of staff, Ahmed Maliki, Iraqi sources said. Nader had worked with the younger Maliki on power generation projects, the former Iraqi official said. The relationship that Nader forged with Maliki’s son apparently brought Nader into the father’s inner circle when the huge Russian arms deal was being negotiated.

In August 2012, Iraq’s Minister of Defense Saadoun al-Dulaimi spent 24 days in Moscow to finalize negotiations for the $4.2 billion Russian arms deal. But during the negotiations, the former Iraqi official told Al-Monitor that he received a message from former Russian Energy Minister Yuri Shafranik warning him that there were other people in Moscow claiming that they, and not the defense minister, were representing Maliki, and that the deal should go through them.

Eventually, on Oct. 3, 2012, Shafranik went to Baghdad to try to clarify the situation with Maliki, the former Iraqi official said. Shafranik even offered Maliki a direct communication line with Russian President Vladimir Putin to avoid confusion and leaks.

“The third of October, Yuri [Shafranik] came to Baghdad, met the prime minister and told him clearly that ‘Mr. Putin is suggesting direct relations between you and him to avoid any leakage and … cut any unhealthy things,’” the former Iraqi official said. “The prime minister welcomed that.”

Maliki assured the officials that he welcomed the suggestion to streamline their contacts and signaled that the confusion over who represented Baghdad in the arms deal would be resolved.

So the former Iraqi official was astonished when he accompanied Maliki to Moscow in October 2012 to sign the Russian arms deal to see Nader enter their hotel and take the elevator to Maliki’s suite.

“We were in a Radisson hotel in Moscow,” the former Iraqi official said. “And all of a sudden, George Nader came, walking very fast, entered the elevator, went up and, I saw from the screen over the elevator, went to the level where the prime minister was staying.

“When the minister of defense came down to the ground floor, I asked, did you notice George Nader? And he said yes; he saw him entering the prime minister’s suite,” the former Iraqi official said. “By that time I realized the issue is in-house. The corrupted party, which went to Moscow to represent Maliki, they are not … strange people. They are in the circle with Maliki.”

The former Iraqi official continued, “Also, while we were there we discovered new facts. I myself did not know that those people who traveled to Moscow at the end of August, that they are connected to Maliki and his son. But George Nader I knew very well. I was shocked. Then it immediately came to me — Nader’s relations with the son of Maliki.”

Over the course of the trip to Moscow, “we came to know that one of the three people who had been in Moscow presenting themselves as [Maliki’s] representative was George Nader,” the former Iraqi official said.

A call Wednesday by Al-Monitor to an attorney who represented Nader in an earlier case was not returned. A spokesman for the Iraqi Embassy said it did not have information on the matter.

The Iraqi-Russian arms deal was controversial in Iraq and long suspected to have involved corruption. In November 2012, just a month after it was signed, Iraq’s then-acting Defense Minister Dulaimi announced that the deal was canceled, “citing possible corruption in the contract,” Reuters reported.

But Maliki’s then-media adviser Ali al-Moussawi was cited by Reuters as saying that the deals would be renegotiated and any suspension of the contract was “a precautionary measure because of suspected corruption."

From Iraq to the UAE

After the end of Maliki’s run as Iraq's prime minister in 2014, Nader made his way to become an adviser to the Abu Dhabi crown prince. Until Trump’s election, however, he had maintained such a low profile that even several Washington consultants who have advised the Emirates said they were entirely unaware of his role.

It may now be left to Mueller to help deepen understanding of Nader’s mysterious activities and what role they may have played in influencing the Trump administration’s policies toward the Middle East.