Iraq’s vice president may have had upcoming elections and Iranian influence in mind when he visited Moscow recently. 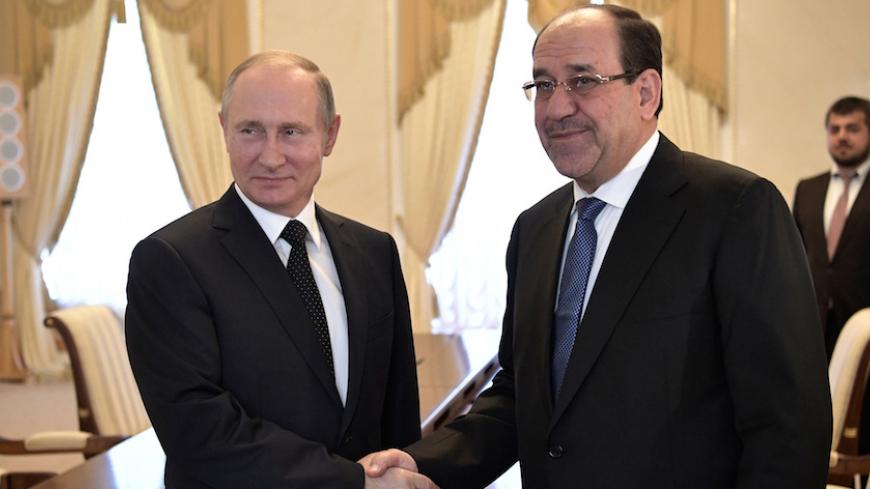 Iraqi Vice President Nouri al-Maliki had a lot on his mind when he paid a three-day visit to Moscow last week. He had a busy agenda that included high-level negotiations with Foreign Minister Sergey Lavrov, Russian Federation Council (Senate) Speaker Valentina Matvienko and President Vladimir Putin.

Diplomatic protocol did not call for a meeting with Putin, but the fact that the Iraqi politician met with Russia’s head of state points to the unique character of the visit.

Another striking feature of Maliki’s trip was that it was arranged not by the Russian Foreign Ministry, but by the Senate. Matvienko has been quite active politically in recent months. It can be assumed that the organizers were unsure whether Putin himself would grant an audience to Maliki — so their meeting testifies to the Russian president’s keen interest in Iraqi affairs.

Speaking about the visit’s objectives, the Iraqi vice president told RIA Novosti news that during the negotiations he would focus “on the need to activate Russia's role in the region, particularly in Iraq, and to intensify economic relations in the fields of electricity, energy and trade."

He also said he would discuss Russia supplying military equipment to the Iraqi army.

Maliki appears to have wanted the interview to be music to Russia’s ears, as he dwelt on America’s misadventures in the region and praised Russia’s invaluable contribution to Arab affairs. Some Russian media outlets have misinterpreted Maliki’s willingness for Moscow to have a stronger presence in Iraq, seeing it as a Syria-style request to send troops to Iraq. No matter how much that idea pleases some in Moscow, it is obvious the Iraqi vice president was speaking merely of an intention to foster military and technical cooperation. This is evident by Maliki inking a contract during his visit to purchase a large number of T-90 battle tanks.

If, however, the agenda had been limited to military and technical cooperation, energy partnership and counterterrorist measures, the Iraqi vice president would not have needed to meet with the top Russian leadership. Experts in Moscow tend to see Maliki’s visit in the context of his country’s coming elections in April and Iraqi Kurdistan’s independence referendum this September.

Ruslan Mamedov, an expert with the Russian International Affairs Council, told Al-Monitor, “The Moscow visit can be analyzed against the backdrop of the diplomatic flurry by various Iraqi political forces on a regional scale and the upcoming voting procedure.”

Iraqi politicians are stepping up their efforts to engage internationally, which has culminated in fence-mending with all Middle Eastern powerhouses, including Saudi Arabia, Egypt, Jordan and in some ways, even Turkey. By doing this, Iraqi office-holders are seeking external support to shore up their positions at home. Generally, such political behavior found among elites of the Mashriq area (eastern Mediterranean) signals a decline in a state’s independent decision-making.

Considering Iraq’s contemporary political landscape, Mamedov believes Maliki, who is also a former prime minister, “wields much less power than he used to.”

“He is struggling to return as kingmaker in a fight for influence. At the same time, he is hardly alone in challenging Haider al-Abadi, Iraq’s incumbent prime minister and Maliki’s fellow party member. Moreover, the Sadrist movement, which has agreed to form a united parliamentary bloc with the National Alliance, headed by another former prime minister, Ayad Allawi, should be added to the list of Iraq’s major players. In his pursuit of a second term in 2010, Maliki is thought to have lost the support of Grand Ayatollah Ali al-Sistani, the most influential Shiite cleric, which matters greatly in today’s Iraq. Conversely, in addressing Mosul’s combatants and civilians after the liberation of the city from [the Islamic State], Abadi highlighted Sistani’s role and blessing,” Mamedov said.

He added, “At the beginning of his tenure, Abadi was portrayed as a weak and accommodating politician, but this image has recently been cleaned up. Moreover, he continues to skillfully maneuver between Americans exerting influence on Iraq and Iranians, which is also a positive contribution to future consolidation of his own positions. Unlike Abadi, who is continuously perceived by all the groups as a compromiser, Maliki has implacable enemies who consider his rule unacceptable.”

Mamedov noted that Abadi and his Cabinet’s discontent with the vice president’s trip to Moscow was rather suggestive in this respect.

Ildar Minyazhetdinov, a fellow at the Institute of Oriental Studies of the Russian Academy of Sciences, told Al-Monitor the visit should be considered through the prism of the upcoming independence referendum in Iraqi Kurdistan.

He said, “The visit mainly aims to secure the Kremlin’s assistance in trying to influence its Kurdish partners in Erbil [which some Kurds consider their capital], the faction of the Kurdish political elite that has always been favorably disposed toward Russia. Baghdad hopes Moscow’s support will pave the way for conflict resolution and encourage the Kurds to postpone the referendum to a later date, to reject the idea altogether or to vote 'yes' to preserving the integrity of the Iraqi Republic. But Baghdad may be equally trying to drive a wedge between the Kurdish groups with Moscow’s help and shatter their fragile and questionable union.”

Since 2014, the Iraqi government has fiercely resisted Erbil’s attempts to hold an independence referendum. In turn, Erbil has repeatedly resorted to the threat of that referendum in its horse-trading with the authorities over political autonomy and its economic interests.

Minyazhetdinov noted that the growing desire of the Kurds to secede can largely be attributed to Maliki’s term as prime minister, which “led to the financial, economic and political crisis in Iraqi Kurdistan.”

Moscow, however, is quite skeptical about the potential secession, though the Russian government avoids strongly worded statements and supports the people’s right to self-determination.

Still, the Kremlin hopes for a compromise and some alternative scenario. In an interview with Kurdish TV channel Rudaw, Lavrov said, “We see [the referendum] as a manifestation of the aspirations of the Kurdish people. … We expect that the final decision will be made with due account of all the … factors of this step, including the situation in the region and positions of neighboring states.” In reply to a question about Russia’s readiness to maintain relations with Iraqi Kurdistan if it votes for independence, Lavrov said he “would rather not comment on hypothetical questions.”

Russian experts think the independence of the regions of northern Iraq will not only imperil the country’s economic well-being, but will also threaten the survival of Iraqi statehood, since the integration of the Sunni regions into a united sociopolitical space is hard to imagine at this point, especially after the mass casualties of the Mosul operation. In addition, independence for Iraqi Kurdistan could negatively affect neighboring states, primarily Syria and Turkey, but also Iran.

“What made Maliki think Moscow would help him? The matter is that he conducts the pro-Iranian policy in Iraq. Today, Iran’s influence of Iraqi politics is unprecedentedly strong. The vice president’s visit should certainly be analyzed within the broader context of improving Russian-Iranian relations. Moreover, greater military-political cooperation between the two states in the Middle East should also be taken into account,” he said.

Minyazhetdinov added, “Maliki’s appeal to Moscow, which has long-standing strong ties with Iraqi Kurdistan, is essentially Iran’s request for the Kremlin’s assistance in addressing the Kurdish issue in Iraq.”