The visit by Prime Minister Benjamin Netanyahu to the northern border and the extensive paratrooper drill last week sends a clear message to Lebanon and Hezbollah: Israel is prepared for an attack. 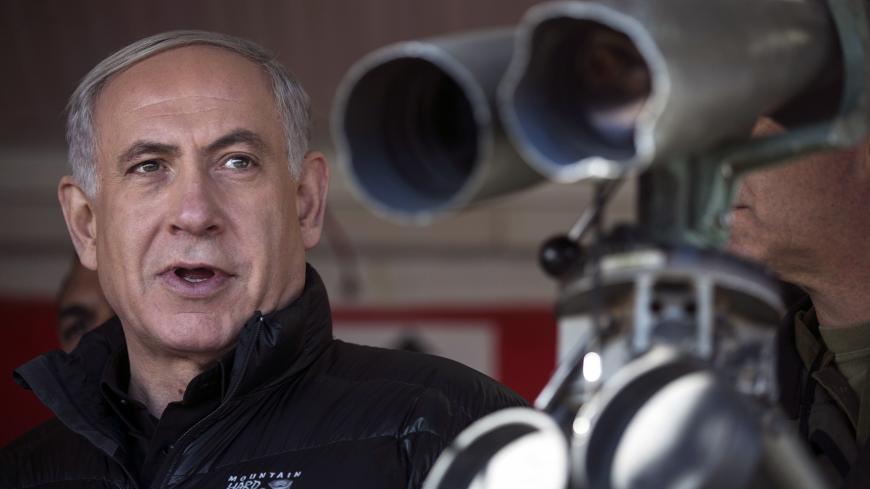 On Feb. 6, Israel’s Security Cabinet paid a visit to the country’s northern border. The ministers, led by Prime Minister Benjamin Netanyahu and Defense Minister Avigdor Liberman, were photographed in fashionable windbreakers, baseball caps and binoculars looking out over the Syrian border from the Golan Heights. Photos from the tour that reached the press were shot in the Golan Heights, with the ministers looking northeast, or in other words, at the Syrian front.

According to official reports from the Syrian army, that same night, Israeli aircraft attacked a target on the outskirts of Damascus. That same area, where a Syrian research facility involved in the “Precision Project” for missiles is located, had already been bombed in the past. Indeed, this site is considered by Israel to be a direct strategic threat. The Syrian army’s statements about the attack were unusually detailed. The official statement said that Israeli jets fired missiles from Lebanon’s air space. The Syrians are trying to reshuffle the deck and get Israel to violate its “balance of fear” with Hezbollah. The Syrians charged Israel with having “complete responsibility for its repeated and uncalculated adventurism and shows of force.”

The Syrian statement was intended, supposedly, to reveal what the Syrians believe are Israel’s true intentions and to entangle Israel in a conflict with Hezbollah, with whom it has a “balance of fear.” The irony is that Israel operated freely in Lebanon for decades while taking care not to violate Syrian sovereignty. Now the situation is reversed. According to the current rules of the game, the foreign press reports that the Israeli air force has been bombing targets in Syria on a weekly basis, while taking every precaution not to violate Lebanese sovereignty.

While the Israeli Cabinet was photographed in the Golan Heights facing the Syrian border, most of the visit to the north dealt with the volatile Lebanese front. This front poses the greatest threat to stability in the region. Then the ministers arrived at “The Pit” — the Israel Defense Forces’ (IDF) command center in the north, situated in the Upper Galilee. They entered the mountain and descended deep inside to a floor that is considered “sterile” and safe from foreign listening devices. There they received briefings from the Chief of the Northern Command Maj. Gen. Yoel Strick, the head of Military Intelligence Herzi Halevy, Chief of Staff Gadi Eizenkot and other senior military officials. The briefings focused mainly on what is happening in Lebanon and on the threats posed to Israel by Hezbollah’s growing strength. In the past few weeks alone, the winds of war blowing across the region have turned into a veritable hurricane.

Preparations on the Lebanese side of the border are similar. Israel has been busy lately constructing a wall along the Blue Line — the border demarcation following Israeli withdrawal from Southern Lebanon in 2000. But statements released this week by Lebanese President Michel Aoun and senior military staff there have made this construction into a casus belli for the Lebanese people. In this case, Israel is convinced that Hezbollah Secretary-General Hassan Nasrallah is pulling the strings. The IDF’s project to construct a border obstacle was first revealed by Al-Monitor in 2015. It described how the IDF was building cement barriers and using the natural topography along the border to create impassable obstacles, which will make it difficult for Hezbollah to surprise the IDF by launching a ground attack on Israeli territory in the next encounter. Now the Lebanese are claiming that the obstacle is a violation of their sovereignty. Nevertheless, Israel has no intention of stopping the project. On the contrary, this game of chicken between the two sides is proceeding at full throttle.

All in all, the various war games taking place in Israel and other places give a general overview of what the region will look like after the third Lebanon war. The damage to Lebanon will be enormous, with most of its national infrastructures in ruins and thousands, if not tens of thousands, of casualties. Hezbollah will also suffer a resounding blow, though it is hard to imagine that it will be completely defeated and obliterated.

The problem is that Israel will have no cause to celebrate either. The second Lebanon war caused no substantive damage to the powerful Israeli economy. It failed to shut it down and caused no significant damage to infrastructure. This time, however, it is clear to the decision-makers in Jerusalem and the commanders of the military in Tel Aviv that the number of casualties will not be measured in the dozens but in the hundreds, and perhaps even in the thousands. Tel Aviv and other centers will be the sites of enormous damage, though not on the same scope as Beirut, and the damage to the economy will be significant as well. It is not at all certain that it will be possible to determine who is the winner in this clash, given the nature of asymmetrical conflicts like this. In other words, no one will come out of the next round happy. Both parties in the conflict will regret fighting it. Then why not prevent it in the first place?

It is safe to assume that in internal discussions and covert messages sent by mediators, Israeli security officials make a point of noting that this time, Israel will make an effort to engage in a bold and daring ground maneuver, deep into Lebanese territory. It is also likely that Israel will do everything it can to ensure that this time, Nasrallah will not come out of this conflict alive. In the second Lebanon war (2006), Israel tried to kill Nasrallah using JDAM (Joint Direct Attack Munition) bunker busters. Either 11 or 12 of them were dropped, one after the other, on a building where Nasrallah was believed to be holed up in its fortified basement, but Nasrallah managed to walk out of it alive. This time the goal will be Nasrallah’s head, no matter what it costs. It is important to the Israelis that Nasrallah realizes this before the situation deteriorates any further and reaches the point at which both sides are compelled to fight.

Meanwhile, the IDF continues to prepare for the complex challenge posed by the northern front. On Feb. 3, the media got a glimpse into the Paratrooper Corps training, as they prepare to fight deep behind enemy lines without supplies or munitions, relying entirely on local infrastructures. It was a very obvious hint. In the next round of fighting, Israel will not make do with a convoluted and symbolic ground operation like it did in the second Lebanon war, where losses exceeded effectiveness. By showing its troops preparing for the next round, Israel was sending the message that next time, Hezbollah, the Bashar al-Assad regime and their Iranian backers will find the IDF ready and roaring to go, deep inside Lebanon. They have learned the lessons of the last encounter and are prepared to take advantage of the “depth command” (dealing with operations deep into enemy territory) and ranked commando capacities, which Israel has spent years developing.

Having written all this, it seems to me that both parties would still prefer to see the winds of war die down and the potential for conflagration dissipate. No one stands to benefit from the other option.