The Israel Defense Forces have altered the topographical contours of the Western Galilee to create a steep cliff adjacent to the border with Lebanon, with the objective of turning the ground into a strategic advantage against Hezbollah. 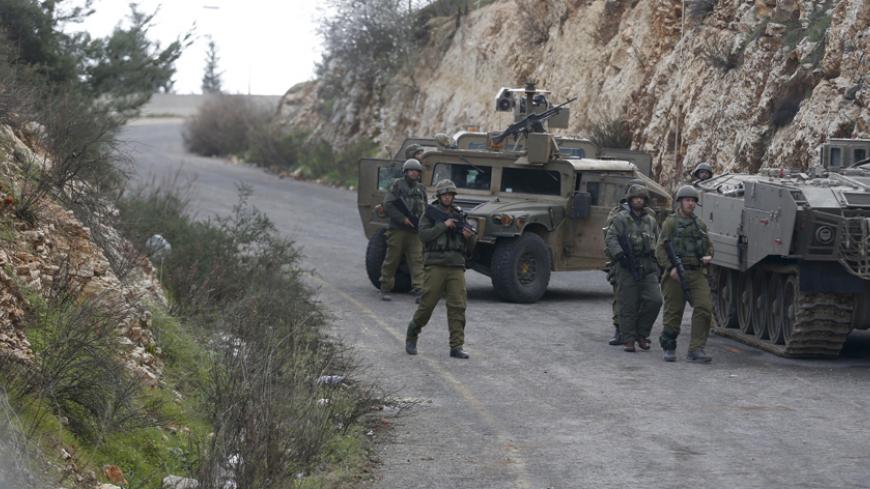 On March 12, 2002, two terrorists infiltrated Israeli territory from Lebanon by leaping over the border fence. They used a “trapeze ladder,” an ingenious device that enabled the combatants to sail over the border fence without touching it, thus preserving the element of surprise (when the fence is touched, a warning is sounded in the Israeli War Room, which immediately dispatches Israel Defense Forces (IDF) combat soldiers to the spot). The terrorists somehow managed to drag the trapeze ladder (which weighs between 150 to 200 kilograms [330 to 440 pounds]) to the fence, stabilize it, cross the fence, hide it in Israeli territory and station themselves on a hill overlooking a crossroads near Israeli Kibbutz Matzuva. There they opened fire on Israeli vehicles and civilians who happened to be in the area, killing six Israelis, including an IDF captain, and wounding additional Israelis before the terrorists were eliminated.

Exactly 13 years have elapsed since then. Israel attributed that terrorist attack to Hezbollah, even though the organization claimed it was not responsible (the Islamic Jihad claimed responsibility). Today, Hezbollah Secretary-General Hassan Nasrallah openly declares that in the next conflict with Israel, Hezbollah will conquer swathes of the Israeli Galilee. This warning, despite its exaggerated posturing, is addressed seriously on the Israeli side of the border. Hezbollah cannot overcome or conquer Israel, but if it uses several tools in tandem — the element of surprise, concentration of forces and meticulous effort and planning — it is capable of taking control of a small Israeli locality in the next clash, or at least a few houses at the edge of such a village or town. This would be for short intervals limited to a few minutes or a few hours maximum, until elimination of the Hezbollah force.

Such an incident would reverberate throughout the Middle East as a strategic event. The last time Israel lost population centers to its Arab adversary, even for a limited time period, was in the War of Independence in 1948. During the 1973 Yom Kippur War, Israel evacuated its localities in the Golan Heights on its own initiative. After a few days, it succeeded in retaking control of the entire Golan Heights, after which it invaded Syria. Should Hezbollah succeed in seizing control of an Israeli village in the Galilee, this would constitute a precedent and tremendous strategic achievement and morale boost for Nasrallah, even if it ended with the expulsion or elimination of the invaders.

High-level Israeli officers on the northern front are aware of this contingency. They say that it is impossible to secure every single spot at every given moment. The zone is long, winding and challenging. Hezbollah has significant commando capabilities and several units that are able to cross the border by surprise, without advance warning. Under such circumstances, since the IDF cannot be everywhere all the time, Hezbollah combatants are definitely capable of taking over a small village or neighborhood at the edge of a population center for a certain period of time, the officers say. So what can be done?

The expanse between Kibbutz Hanita and the small Shlomi township is viewed as a vulnerable region. This is in the western section of the Blue Line separating Israel from Lebanon, only a few kilometers from the Mediterranean Sea. This was exactly the spot where those terrorists infiltrated in 2002, on their way to the attack at the Matzuva intersection. Kibbutz Hanita sits exactly on the border line, at the summit of a mountain range that extends the length of the front until Rosh Hanikra on the seashore. Opposite Hanita, only a few hundred meters away, is a corresponding range on the Lebanese side from which the Hezbollah people keep watch. The two mountain ranges are separated by the al-Qatayeh wadi, a very steep valley covered by thick vegetation. It is relatively easy for terrorists to infiltrate the border in the area. The thick forest covering the wadi allows them to hide and move without being revealed. Infiltrators only have to wait for the right moment to cross the security fence and they reach Hanita’s endmost house, only a few meters way.

In recent weeks, Israel has declared the territory between the border on the Israeli side and the Blue Line (the border itself) as a closed military area. A large IDF presence, including Merkava tanks and a high-quality infantry battalion, are on alert. Between six to eight enormous bulldozers can be seen on the incline of the wadi, the mountainside. With tremendous intensity, these machines gnaw away at the walls of the steep precipice. The work began long weeks ago and will continue for some time. What the IDF is doing, with tremendous efforts, is changing the topographical contours to create a steep cliff that will protect Hanita and Shlomi, thus transforming an infiltration into this area into an impossible logistical feat. Israel security sources explain that the secret is to transform the terrain into a strategic advantage. And that’s exactly what they are doing.

Nature itself laid the foundations for this transformation. The al-Qatayeh wadi is deep and its walls are steep; this makes the overland climb toward the Israeli border a difficult operation. Now Israel is uprooting the thick vegetation covering the precipice on its side with bulldozers, then gnawing at the exposed precipice to turn it into a cliff at almost a right angle. In effect, this cliff will ascend from the bottom of the wadi to a tremendous height. In order to cross it, Hezbollah combatants would have to rappel from it or parachute from the sky. The new reality will allow the IDF to take necessary measures to shorten the impossibly long length of the zone.

The IDF is aware of the fact that any obstruction they may place, whether artificial or connected to the terrain, could ultimately be traversed. They don’t view the new Hanita cliff as an all-inclusive insurance policy. When earthworks in this zone are completed, the IDF will deal with additional zones. The ground contours along the Blue Line will allow the IDF to play with the topography and transform it into a protective tool. It will cost a fortune; already, the estimated budget for construction of the Hanita cliff will be higher than the budget of the entire army division. But the investment will pay off when the time comes, in a big way — so the IDF believes.

Hezbollah is aware of what the IDF is up to. In the first few weeks, it didn’t know how to react or what was happening. Afterward, the view on the ground didn’t leave any room for doubt. On the other side of the border there is heavy, thick traffic of white UN jeeps that maintain this sensitive borderline. Vigilantly, the two sides keep close tabs on each other’s actions. It is clear to both sides that preparations are underway for the next round of hostilities.

And when will that round break out? At the moment, it seems far off. The IDF says that the Hezbollah now has its eyes on the east. It is deployed in Syria with thousands of fighters; it buried hundreds of fighters in the last two years; it has a front in northern Lebanon opposite the Islamic State; it has a front in Beirut and an internal front in the convoluted Lebanese politics. Hezbollah knows, says a high-level Israeli officer, the magnitude of the cost of a potential takeover of the remotest Hanita house for a few hours. While the house itself may be worth about $200,000, if it falls into Hezbollah’s hands for a short time, the significance of the destruction that will ensue by such an act will amount to around $20 billion in Lebanon. I am not sure that for Hezbollah it is worth the effort, he adds.