Yemen's civil war demonstrates that despotism leads to more of the same, no matter who's in power. 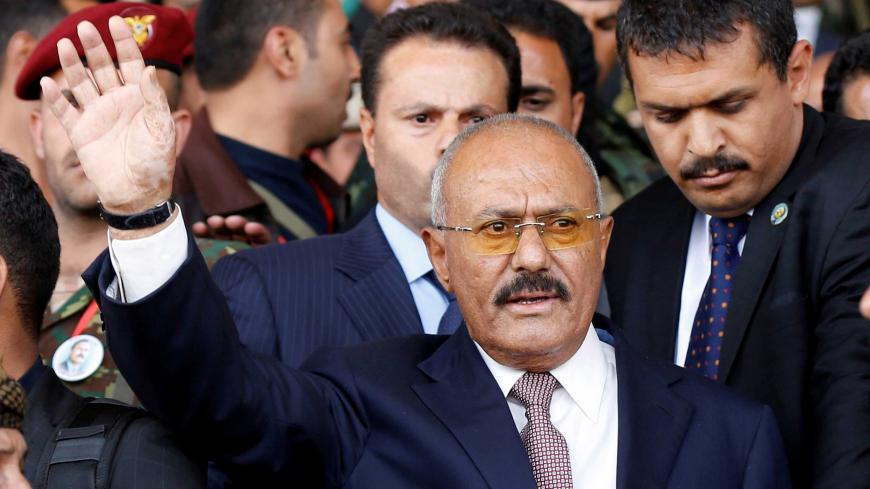 Former Yemeni President Ali Abdullah Saleh gestures to supporters as he arrives to a rally held to mark the 35th anniversary of the establishment of his General People's Congress party in Sanaa, Yemen, Aug. 24, 2017. - REUTERS/Khaled Abdullah

The recent death of deposed Yemeni President Ali Abdullah Saleh at the hands of his one-time allies, the Houthi rebels, marks a new stage for Yemen and gives rise to an important question: In this country ravaged by civil war, who will inherit Saleh's social, political and military power?

Saleh was killed Dec. 4, just two days after his accord of convenience with the Houthi rebels collapsed. The break led to clashes between the Iranian-backed Shiite Houthis and Saleh, who wound up being backed by the Sunnis and the Saudi-led international coalition. The Houthis bombed Saleh's home and office in Sanaa. Details of his death are contested; some say he was killed in his home, others say he died while trying to flee the city.

Yet Saleh's remaining power far exceeds the Houthis'. Despite his dismal human rights record, the popular support he enjoyed will wind up being divided based on sectarian and geographical factors. The Houthis will only inherit a limited part of this support as they continue to alienate the public by forcible recruiting, including of women and children.

Saleh was Yemen's president for decades, but after months of protests he agreed in late 2011 to step down and transfer power to Abed Rabbo Mansour Hadi, his former deputy, who was officially elected in February 2012 as the only candidate. Houthis boycotted the election.

The Iranian-backed Shiite Houthis persecuted their Saudi-backed Sunni opponents in Sanaa during the times they controlled the capital, with arrests, executions, vast "inspections" of homes and crackdowns on protesters, in addition to bombing houses and blocking the internet and social media sites. These measures align with the Houthis' religious extremist ideology and strict security and military measures. The Houthis realized that the number of Saleh’s supporters had increased in recent years, as people saw him as an alternative to them.

The General People’s Congress, which was headed by Saleh, is already divided, with a small group in Saudi Arabia affiliated with Hadi, who is living there in exile, and a larger component inside Yemen loyal to Saleh. This latter component has divided again into two groups: one that is being persecuted and pressured by the Houthis to surrender and another based abroad that is thought to be affiliated with Saleh’s son, Ahmed Saleh, who now resides in Abu Dhabi. Ahmed Saleh issued a statement after his father’s killing in which he announced his willingness to return to the political arena.

On the military level, with Saleh’s killing, it seems his already-divided forces might have been dealt a final defeat. The fate of Tarek Saleh, the nephew of the former president and commander of his troops, remains unknown. Some reports say he fled the country after Saleh’s killing, while Houthis continue to search houses and locations in Sanaa in search of him.

The Saudi-led coalition forces — taking advantage of the public's anger in Sanaa against the Houthis since Saleh’s killing — have escalated their military operations on the northwestern coast in an attempt to take over the Houthi-controlled Hodeidah port, which is northern Yemen’s only outlet to the world. But even if the coalition manages to seize the port, the advance will most likely not put political pressure on the Houthis. Instead it will exacerbate the suffering of Yemenis and further embarrass the coalition at the international level — as it already faces widespread criticism for its blockade and accusations of targeting civilians. Also, even with control of the port, it would be difficult for the coalition to recapture Sanaa, as it is far from Hodeidah and surrounded by mountains.

Even though the Houthis had accused Saleh of treason for saying he would turn over a new leaf with neighbors, the Houthis now say they are willing to open dialogue with the coalition countries. This might herald a political settlement between the Houthis and the coalition-backed, internationally recognized government in exile.

Such a settlement, if achieved, would have to recognize Houthi control over the larger part of northern Yemen, where the majority of the Yemeni population resides and where the capital lies. However, legitimizing the Houthis’ control will not make people forget the violent nature of the Houthis and their policies.

Otherwise, with the Houthis in control as a sectarian militia, the country will divide into groups and the civil war will continue. Houthi cohesion is expected to collapse, since the extremist group rose from an isolated area where opportunists compete over power. The group’s slogans about governance, fighting corruption and facing aggression will keep falling now that they have killed Saleh, their only political ally.

When the Houthi group initially emerged, it claimed it was fighting persecution against it and was seeking revenge as a counter to military oppression. Now the group has given rise to similar feelings of anger among Yemenis regardless of their political inclinations, tribes or groups. Saleh was killed like Houthi leader Hussein Badreddin al-Houthi was killed, and the same vicious circle of revenge will take its toll on Houthis and their many opponents.