The situation in Yemen’s south is volatile and the north is still in the Houthis’ firm grip, so people's curiosity has been raised about the motives behind Brig. Gen. Tareq Saleh's recent trip to Saudi Arabia. 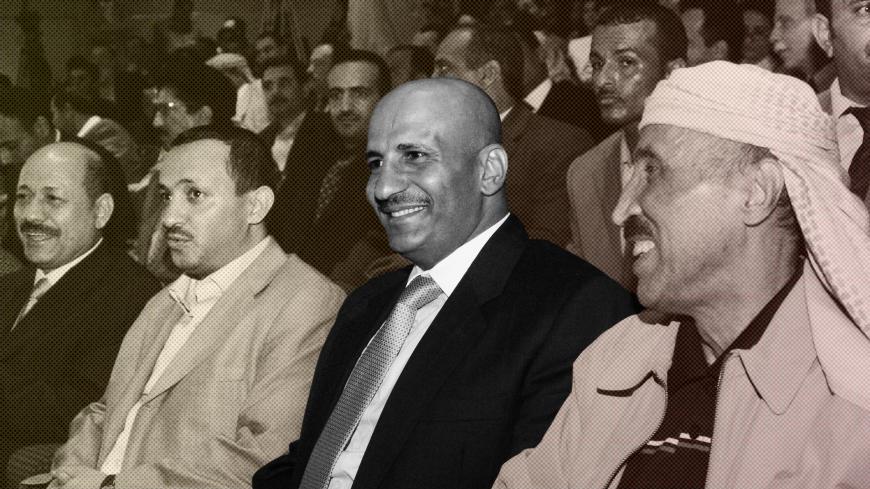 Brig. Gen. Tareq Saleh, a Yemeni military commander and nephew of the late President Ali Abdullah Saleh, remains defiant two years after his military defeat by Houthi rebels in December 2017. Tareq Saleh has been commanding the Saudi-led Arab coalition Joint Forces in Yemen’s Red Sea battlefield. His mission, he says, is to wrest Sanaa and all Yemeni territories from the Houthis, who took over the capital in September 2014.

In 2015, 2016 and 2017, Tareq Saleh was an overt enemy of Saudi Arabia. The General People’s Congress, led by his uncle, who ruled Yemen for 33 years, struck an alliance in 2014 with the Iran-allied Houthis, seeking to undermine and finally oust the Saudi-backed Yemeni government. But their alliance collapsed miserably in December 2017 when the president switched sides and was killed two days later by his former Houthi allies. Tareq Saleh, facing an unmanageable military loss, escaped from Sanaa to Yemen’s Marib.

The Houthis prevailed after eliminating the president, and their military and political muscle grew stronger.

Tareq Saleh's loss dictated his rapprochement with the Saudi-led Arab coalition. Today he no longer slams the Saudi-backed government and is a genuine ally of the Saudi-led coalition fighting the Houthis. His enmity toward Saudi Arabia has dissipated.

Saleh visited Riyadh this month. He posted Jan. 15 on Twitter a photo of himself posing with the Saudi vice minister of defense, succinctly writing, “ It was a fruitful and outstanding meeting with His Highness Prince Khalid bin Salman today in Riyadh.”

2December News Agency, which is associated with Saleh, reported that he and the prince discussed a number of issues concerning Yemen and their mutual cooperation to “counter the Iranian project in Yemen represented by the Houthis.” Both sides are concerned about the stability and security of the region and safe navigation in the Red Sea and Bab el-Mandeb Strait, according to the agency.

Presently, Saleh is leading forces in the coastal areas of western Yemen's port city of Hodeidah. In December 2018, the Yemeni government and the Houthis signed the UN-sponsored Stockholm Agreement regarding Hodeidah, which aimed to prevent a destructive war between the Houthis and other forces in the city. So far, the deal still has not been implemented and different parts of Hodeidah province are still awash with forces from both sides.

Saleh has been critical of the deal, since he can't initiate a military action on his own in Hodeidah; he would need the approval of the UN-recognized government and the Saudi-led Arab coalition. This recent visit to Riyadh could pave the way for a military action against the Houthis or at least cement a firm alliance between him and Riyadh.

Abdulsalam Mohammed, head of Abaad Studies and Research Center, a Yemeni think tank, told Al-Monitor that Saleh's “visit to Saudi Arabia came in the wake of an agreement between Saudi Arabia and the United Arab Emirates on the Emirates’ withdrawal from [Yemen’s western] coast, to be replaced by Saudi Arabia. Riyadh wanted to send signs of confidence by adopting these forces on the coast.”

According to Mohammed, the Houthis' political inflexibility and desire to impose themselves by force has made the coalition think about military action to pressure them into negotiations. However, years of dialogue have not broken the political stalemate, and peace remains nowhere in sight, as evidenced by a Jan. 18 attack on a mosque at al-Estiqbal military training camp in Marib. The government blamed the attack, which killed at least 111 people, on Houthi rebels. This was followed by a deadly clash Jan. 22 in Sanaa.

Mohammed also attributes Saleh’s Riyadh visit to the coalition’s discontent with the structure of the Yemeni government. He explained, “The coalition is not satisfied with the political equation within the legitimate government, and it sees the inclusion of the [secessionist] Southern Transitional Council and Saleh as a force that reduces the control of President [Abed Rabbo Mansour] Hadi and the presence of the Islah Party.”

Since the kick-off of the Saudi-led military intervention in Yemen in March 2015, Saudi Arabia has attracted several allies in Yemen, including the government, political parties, tribal figures and military commanders. However, this has not helped end the war or defeat the Houthis. Mohammed believes the problem is the coalition’s lack of a clear strategy on how to coordinate between anti-Houthi forces and unite them under Hadi's leadership.

Majed Aldaare, editor-in-chief of the Moragboon Press news website, told Al-Monitor, “There is a bid to move Saleh from the Hodeidah battle to the Sanaa battle with a Saudi directive, to test his strength and the extent of his ability, to change the thinking that a military solution is impossible in Yemen. Certainly, the military solution will be possible in case the government forces win the battle for Sanaa or Hodeidah.”

Aldaare reckoned that the Saudi-led coalition is pushing to advance the political solution and implement the Riyadh Agreement through including Saleh in this process. The Riyadh Agreement was signed in November and intended to stem any further fighting between the Southern Transitional Council and government forces in the south.

He added, “Such a visit is crucial for improving relations between the two sides. Saudi Arabia will attract Saleh, who has been supported and funded by the UAE, and this could usher in a new chapter of decisive battles against the Houthis on several battlefields.”

Gaber Mohammed, a Yemeni political analyst, expects a fresh political scenario in Yemen. He posted Jan. 15 on his Twitter account: “In politics, nothing is static. It is all about mutual objectives and interests, which forge policies and alliances. Tareq Saleh’s visit to Riyadh is a prologue to a new political scenario in Yemen, and the success of such a visit is possible if Tareq opens a new page with the legitimate president [Hadi].”

Yet the likelihood of military escalation in Yemen appears stronger than the prospects for a political resolution, especially with the recent upsurge in violence, which indicates peace in Yemen may not be tangible this year.