The Trump administration claims that recognition of Jerusalem as Israel's capital is just the beginning of a larger strategy for peace, but the US president's complex diplomatic plan may be more of a mirage. 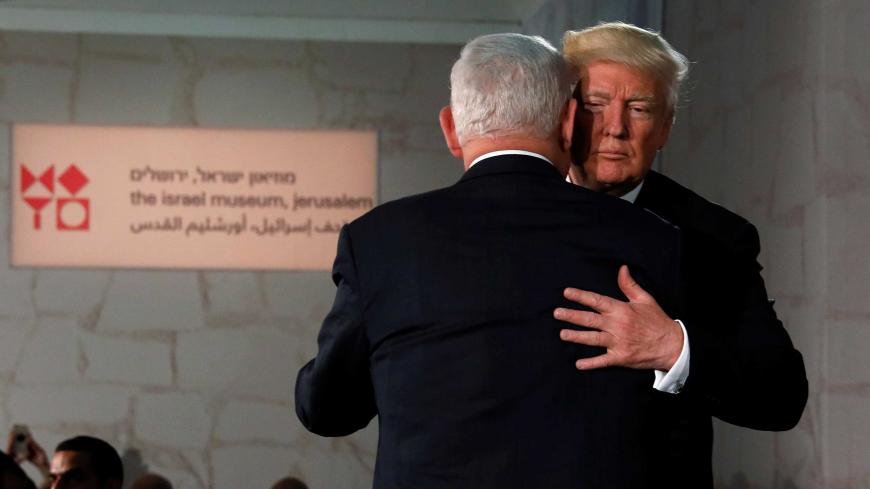 US President Donald Trump (R) embraces Israeli Prime Minister Benjamin Netanyahu after his remarks at the Israel Museum in Jerusalem, May 23, 2017. - REUTERS/Jonathan Ernst

The million-dollar questions that everyone all over the world was asking Dec. 6 were: Why? Why now? What prompted President Donald Trump to do what no other US president did for the last 22 years (since the Jerusalem Embassy Act of 1995) and undo the booby-trapped Gordian knot of recognition of Jerusalem as the capital of Israel? This question is being asked from the Persian Gulf to Berlin, from Ramallah to the UN headquarters in New York. It is being asked in Cairo, Amman, Riyadh and Ankara — but also in Tel Aviv and in Washington.

What stands behind the strange decision made by Trump in spite of the heavy international pressure that was inflicted on him from all directions in recent days? Are we dealing with a “grand plan” of which this is the first step? Is Jerusalem recognition just a prelude that precedes the far-reaching, hard-to-digest diplomatic plan that will soon be placed on Prime Minister Benjamin Netanyahu’s table?

Most assessments say not.

Countless political pundits have tried and failed to predict or interpret Trump using the conventional tools of the field. Every time that there is a choice between sophisticated conspiracy and unprofessional populism, it’s best to pick the latter option. This is true despite words pronounced Dec. 6 by Trump son-in-law and senior adviser Jared Kushner. According to an American source who spoke on condition of anonymity, Kushner, who made a rare appearance Dec. 3 at the Saban Forum in Washington, said after Trump's decision that “this is just the first step of something big.”

Israel’s Ambassador to Washington Ron Dermer also adopted a similar style of speech. According to a political source who spoke on condition of anonymity, Dermer has been hinting over the past few weeks that “something big is going to happen.” On the other hand, it is possible that Dermer was only referring to the president's decision on Jerusalem. As far as Dermer is concerned — as well as Dermer’s boss, Netanyahu — the American initiative can end here with the recognition of Jerusalem as the capital of Israel. They already got what they wanted.

The president’s announcement regarding Jerusalem was a vital lifebelt thrown into the stormy waters that threaten to drown two leaders: Netanyahu and Trump himself. The announcement quickly assumed center-stage in the media agenda not only in the Middle East but also in New York and Washington. Television stations that were, until that very minute, broadcasting nonstop about Michael Flynn’s hardships, Robert Mueller’s investigation and the suspicions piling up in the president’s close environs — immediately focused on the Jerusalem issue and the Middle East drama.

The same was true in Israel as well, but with higher intensity: On Dec. 2, tens of thousands of Israelis went out to demonstrate against Netanyahu and against the wave of anti-democratic legislation he and his people were leading. For the first time since the summer of 2011 during the social-justice protests, it seemed that the average Israeli was shocked at Netanyahu’s indifference. Simultaneously, the advanced criminal investigations of Netanyahu continued to capture the headlines. For the first time in many years, it seemed that the political life of the great sorcerer was about to be cut short. And then, along came Trump.

The presidential announcement constitutes a rare political victory for Netanyahu — a victory at exactly the right time, for him. This victory strongly confirms Netanyahu’s claim that his close friendship with Trump is an Israeli strategic asset of the first order. It also shores up his main claim of defense, according to which his critics deal with nonsense issues such as cigars, champagne and a few gifts here and there, while Netanyahu is the best prime minister that Israel has ever seen. He has no replacement; he is the be-all and end-all.

As time marches on, the similarities grow between the two political twins Netanyahu and Trump. Both operate under a heavy cover of investigations and publicity, both harass the media and both owe their loyalty to the mythological “base” that granted them victory in the elections. The step taken by the president this week is attributed to his obligation to the evangelists, who put heavy pressure on him to recognize Jerusalem. Trump has not carried out most of the promises he made to this giant electoral bloc, which voted for him despite his attitude toward women and his numerous ethical-moral transgressions that were uncovered in the course of his campaign. Now evangelists can be content, together with Sheldon Adelson, who poured $20 million into Trump’s floundering campaign in the last stretch before the elections.

Beyond all this, we must remember that Trump is correct. The recognition of Jerusalem as the Israeli capital is recognition of reality. Trump promised to think outside of the box, and this is the first example of such an act.

Trump’s decision will be judged only later on when all will see whether he triggered the final death of the peace process and, perhaps, a wave of violence. The Palestinians, furious and disappointed, will be tested in a few days: Will US Vice President Mike Pence be received in Ramallah when he comes to visit the region Dec. 17-19? Or will he be rejected? Will Israel be flooded by a wave of violence, as Hamas and jihadis threatened? When violence is threatened in the Middle East, it usually does not erupt. Instead, the “gates of hell” open when no one expects it. Only time will tell who is correct.

And what will be the fate of the presidential peace program? Neither side is willing to place bets at the moment. Palestinian President Mahmoud Abbas and Saeb Erekat, his representative to nonexistent negotiations, announced that the American recognition of Jerusalem has distanced chances for peace. By showing a preference for one side over the other, say the Palestinians, the United States is no longer an honest broker for both sides, thus is neutralized from being involved in the talks. We must remember, however, that the Palestinians have made many such threatening declarations over the years, usually without following through on them.

On Dec. 2, Palestinian intelligence director Majid Faraj visited Washington, where he met his American counterparts. Abbas was supposed to arrive after Faraj, but has canceled his trip until further notice. Faraj shared a lunch in Washington with Erekat, who is recovering from successful lung transplant surgery. According to a diplomatic source, Erekat — whose life was spared thanks to American medicine — told Faraj that so far the Americans have not brought up even one original idea to anyone connected with negotiations: not to the Palestinians, not to the Egyptians and not to the Jordanians.

The level of trust of the Palestinians in the “ultimate deal” Trump promised is hitting rock bottom. Moreover, the cards given them in this round are bad and leave them no room in which to maneuver. Abbas has no alternative but to suppress his anger and continue to wait for the American plan to come to fruition. In this sphere of alternatives that were exhausted and options that were blocked, Abbas has almost no one to blame but himself.