Palestinians point finger at Israel for crisis with US

Palestinians blame Israel's ambassador to the United States for acting to close the PLO Washington office. 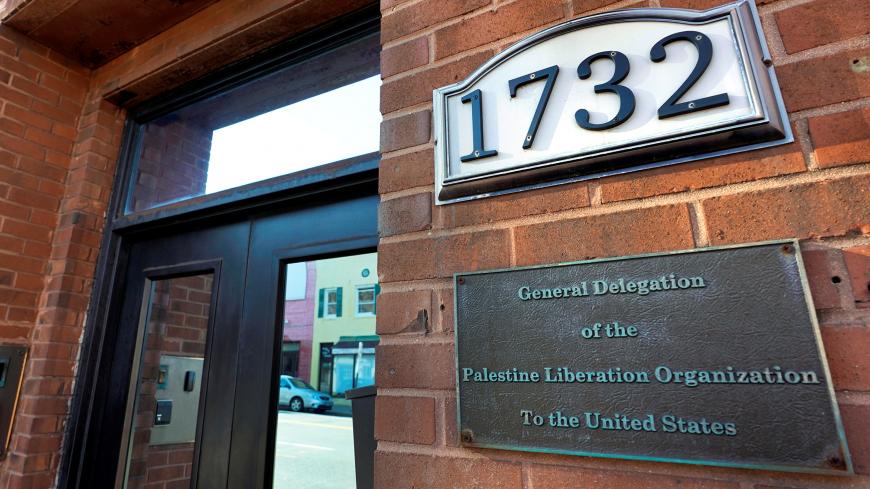 The Palestinians were shocked to receive US Secretary of State Rex Tillerson’s message about the intentions of the United States to close the PLO’s office in Washington unless progress was made in the diplomatic negotiations on Nov. 18.

Tillerson's threat came on the heels of a Palestinian attempt to bring high-ranking Israeli officials to trial for war crimes in the International Criminal Court (ICC) in The Hague. Palestinian President Mahmoud Abbas had called on the ICC on several occasions to investigate acts carried out by Israel in Gaza and the West Bank. And in February 2017 — as a response to Abbas' reaction to the Regularization Settlement Law adopted by Israel — the Americans threatened to impose sanctions on the Palestinians. These sanctions would include the closure of the PLO office in Washington should the Palestinians dare turn to the ICC.

After the signing of the 1993 Oslo Accord in the White House, a law was passed by Congress that permitted the PLO to open an office in the American capital but stipulated that the US State Department would be allowed to close the office should the Palestinians operate against Israel in the ICC.

In the course of White House contacts with Abbas’ office and the attempt to re-start diplomatic negotiations with Israel, an agreement was reached: The Palestinians would freeze all their activities in the international forum and wait for the consolidation and completion of an American diplomatic initiative. This is also known as the “ultimate deal,” as promised by President Donald Trump. According to the US State Department, the Palestinians violated these understandings and are therefore subject to punitive measures.

Until Tillerson’s surprising and unexpected announcement, the Palestinians were convinced that special envoy Jason Greenblatt’s travels to the Middle East, his frequent visits to the Mukataa headquarters in Ramallah, President Trump’s visit to Bethlehem and the hospitality shown to President Abbas in the White House were all positive signs. The Palestinians thought that all this testified to the fact that the Palestinian Authority (PA) had gotten back on track regarding everything connected to its relations with the American administration, despite the obstacles involved.

In recent months, the Palestinians received messages from Greenblatt that a diplomatic program based on the two-state solution would be presented shortly. In addition, Abbas’ office received the green light to pursue reconciliation with Hamas after Greenblatt became convinced that Palestinian unity could advance diplomatic moves with Israel, with the support of Egypt and Saudi Arabia.

Everything looked wonderful until the American announcement, which caused great consternation in Abbas’ office. In fact, senior Palestinian official Saeb Erekat — who is recuperating at home in Bethlehem from a lung transplant he underwent in Washington about a month ago — was interviewed by Israel Public Broadcasting Corporation. Erekat harshly told his interviewers, “If they close our offices, we’ll cut off all ties with the United States. This is very unfortunate and simply unacceptable. This [indicates] pressure on the part of Netanyahu’s government at a time in which we are trying to bring about peace and the ‘ultimate deal.’”

Tillerson had not played a large role in American dealings with Israel and the Palestinians. Instead, the deal-closer job had been accorded to Trump's son-in-law, Jared Kushner, and Greenblatt. That is why the Palestinians are convinced that Tillerson’s threats must be the doings of Israeli Ambassador to the United States Ron Dermer.

“We know for sure that your ambassador has been working for many weeks on members of Congress and the [US] State Department to bring about the closure of the office in Washington,” a high-placed Palestinian source told Al-Monitor on condition of anonymity. According to the source, Palestinian Ambassador Husam Zomlot sent reports in real-time that Dermer was conducting an “ugly and manipulative” struggle against the Palestinian office in Washington and tried to convince officials in the administration to close the office or at least curb Zomlot’s activities in the capital.

Israel responded only laconically to the report about the Palestinian office in Washington. The prime minister’s office released the following brief message: “This is connected to an American law. We appreciate the decision and look forward to continued work with the United States in promoting peace and security in the region.” Simultaneously, Israeli ministers were instructed not to give interviews on the topic due to its sensitivity.

“The [Israeli] goal is to drive even more spokes into the wheel [of peace], to continue to sabotage progress in the negotiations,” claimed the Palestinian source. He added that the Israeli response is an attempt to show that the country was not involved [in the American threats], but “all the activities [against the Palestinian office] bear the fingerprints of the ambassador in Washington.”

According to an Israeli diplomatic source who spoke to Al-Monitor on condition of anonymity, there was nothing inappropriate about the behavior of Dermer. The source held that Dermer was justifiably acting to thwart Palestinian attempts to slander Israel: in The Hague, in UN institutions in New York or anywhere else in the world. “That is exactly the job of an ambassador — to act on behalf of his country’s interests. If indeed he was the one who convinced the US State Department to raise the red flag [to the Palestinians], we should congratulate him for that,” said the source.

The Israeli source added that it would be an exaggeration to think that Tillerson's threats on the Palestinians are only the results of Israeli diplomatic activity. “A number of factors led the State Department to probe the functioning of the PLO office in Washington and the damage it’s causing to the peace process,” he said.

In this whole hullaballoo, Greenblatt’s deafening silence is extremely salient. Usually he sends tweets over every activity or meeting connected to his work. Ever since Trump sent Greenblatt to the Middle East as an emissary, Greenblatt has been trying to create a positive working atmosphere with the Palestinians. His goal is to assuage their suspicions of Trump and show them that the Trump administration is, indeed, an "honest broker." But just when it seemed that the sides had begun to trust one another, along came the American threat.

The Palestinians reckon that Greenblatt was not involved in consultations on the matter nor in the decision to threaten the Palestinians, and that’s why he hasn’t said a word about it as of yet.

Despite Palestinian agitation and the threats uttered by Erekat, the Palestinians don’t really intend to go ballistic over the American threat. Al-Monitor has recently discovered that head of Palestinian intelligence Majid Faraj will be sent to Washington in the coming days to resolve the crisis. But it does seem that it will take a long time to fix the cracks that opened up this week in the very complex relations between the PA and the Trump administration.

When asked about the Palestinian allegation, the Israeli Embassy in Washington offered no comment.