As Lebanon’s Hezbollah and the Israeli government continue to warn each other of a coming cataclysm, both sides predict it would take place in Syria as well as Lebanon this time. 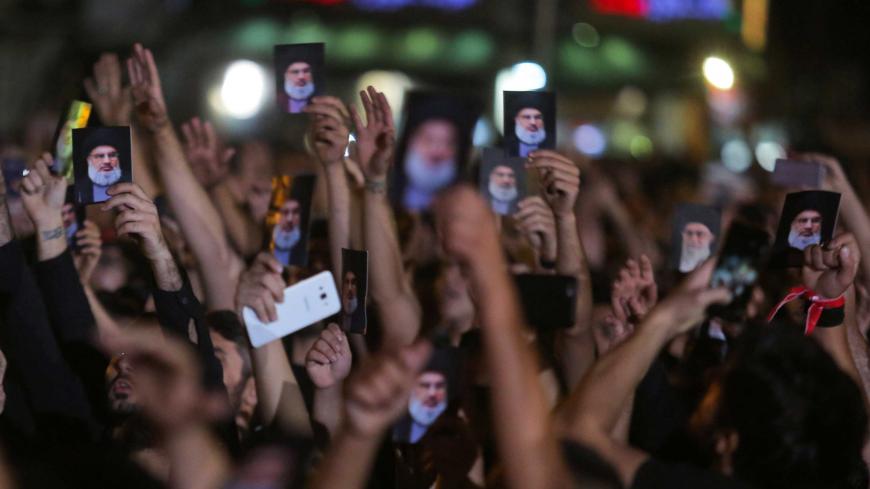 Lebanon's Hezbollah supporters hold photographs of leader Hassan Nasrallah during his address via a video screen during an Ashoura ceremony in Beirut, Lebanon, Sept. 30, 2017. - REUTERS/Khalil Hasan

NAQOURA, Lebanon — At the southernmost point of Lebanon, at the border with Israel, life is normal. Even on weekdays, Lebanese from across the country pour into the southern town of Naqoura to enjoy its unpolluted beach and white cliffs.

Yet Naqoura could become one of the most affected areas if a war were to erupt between Israel and the Lebanon-based Hezbollah.

Both sides have been lobbing threats.

During the 2006 Lebanon War, thousands of Lebanese citizens fled to the north of their country, while others sought refuge in Syria, which at the time was a safe haven. But if the current situation between Israel and Hezbollah deteriorates, Syria might become unsafe for Lebanese refugees for several reasons. In fact, Syria, along with Lebanon, might become the dual arenas where their next war is fought.

"In the next war in the north of [Israel], Lebanon will not be the only front," he said during a speech to Israeli soldiers.

Hezbollah always anticipates war. This has been the case since the last bullet was fired at the end of the 2006 war. It continued to be the main concern after Hezbollah announced in May 2013 that it would fight alongside its ally, Syrian President Bashar al-Assad, against the rebels seeking to topple him and the countries backing them. At that time, Hezbollah Secretary-General Hassan Nasrallah said, “If Syria falls into the hands of the takfiris and the United States, the resistance will be trapped and Israel will enter Lebanon. If Syria falls, the Palestinian cause will be lost.”

For Nasrallah, war is still imminent for Hezbollah even though the Syrian war is taking a positive turn in favor of his alliance, according to the latest reports. Assad is still in power thanks to his allies — Iran, Russia and Hezbollah — while the opposition is weakening, losing its regional support due to rivalries and divergence of interests among its allies, or the absence of a clear strategy.

For Hezbollah, this is another reason to expect an Israeli war, with Israeli Prime Minister Benjamin Netanyahu announcing on several occasions that his country won’t tolerate seeing its security being compromised by threats coming from Syria or Lebanon. Netanyahu’s latest stance in this regard came during the UN General Assembly meeting in New York, where he said Sept. 19, “Israel will defend itself with the full force of our arms and the full power of our convictions. We will act to prevent Iran from establishing permanent military bases in Syria for its air, sea and ground forces. We will act to prevent Iran from producing deadly weapons in Syria or in Lebanon for use against us.”

In May 2013, Israel launched a wave of airstrikes against the alliance of Iran, the Syrian regime and Hezbollah. Since then, Israel has managed to execute dozens of airstrikes on targets inside Syria, few of which have drawn a response. It seemed clear that the rules of engagement limited the war to inside the Syrian territories, and on only two occasions were the rules not observed. Yet the confrontation was limited. A group of Hezbollah members and an Islamic Revolutionary Guard Corps (IRGC) commander were killed in a January 2015 airstrike in the Golan area, and in December 2015, Hezbollah commander Samir Kuntar was assassinated in the Damascus suburb of Jaramana. On both occasions, Hezbollah responded by attacking Israeli military targets in the Shebaa farms area.

Israeli raids on Hezbollah targets in Syria continued as part of Israel's “campaign between wars” strategy, which aims to deal “with dangers before they form,” according to a January 2014 Reuters interview with Israeli air force commander Maj. Gen. Amir Eshel.

Yet the present danger might already have formed. Hezbollah may already have acquired long-range rockets, surface-to-air missiles and what could be regarded as equation-breaking technologies — namely, rockets that are capable of compromising Israel’s superiority in the air. Another main issue of concern for Israel remains whether Hezbollah has succeeded in building its infrastructure in areas adjacent to the occupied Golan Heights.

It is not an overstatement to say that in the Middle East, the only two adversaries who fight a war as if they are dancing a tango are Hezbollah and Israel. This applies to ordinary and psychological warfare. Therefore, less than a month after Netanyahu’s speech to the UN General Assembly in September, Nasrallah spoke before tens of thousands of his supporters Oct. 1 and delivered a message to the Jews of Israel and the world, saying, “Netanyahu's government is leading to your destruction and end. You will pay the price because of Netanyahu's foolish policies, as he is trying to drag the region into war in Syria and Lebanon.”

Nasrallah continued, “Netanyahu and his government … do not have a correct picture about what is awaiting them if they go to this foolish war. Israel does not know where such a conflict would be fought, who would interfere in it or who would be part of it.”

While a war between wars is already in action, a war bigger than all wars is what Hezbollah is vowing if Israel starts a military campaign. Such a war, according to previous speeches by Nasrallah, could “open the way for thousands, even hundreds of thousands, of fighters from all over the Arab and Islamic world to participate — from Iraq, Yemen, Iran, Afghanistan and Pakistan,” he said June 23.

A well-informed source with thorough information about Hezbollah told Al-Monitor on condition of anonymity, “For Hezbollah, the next war isn’t about fighters only. It's also about geography, lands that extend from Lebanon to the borders with Iraq, and this could mean the possibility of launching rockets from inside Syria into Israel, a luxury the group didn’t have during the 33-day war back in July and August of 2006.”

According to the source, Hezbollah’s chief wanted to convey a message to Israel: “He was clearly telling those whom it may concern that the time has passed to deal with dangers before they form.”