After being taken aback by the Kurdish independence vote, Iran is now evolving to view the referendum as an opportunity to forge practical cooperation with affected neighboring states. 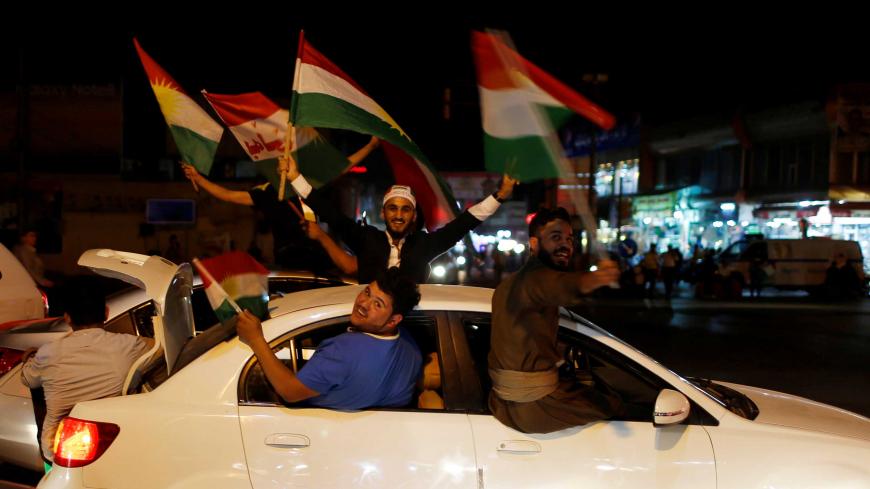 Kurds celebrate to show their support for the independence referendum in Erbil, Iraq, Sept. 25, 2017. - REUTERS/Ahmed Jadallah

Up until the last day before the Sept. 25 Kurdish independence referendum, Iran was still dealing with the event with a sense of disbelief and with the misconception that it would be called off at the last moment. The assumption was that the de facto head of the Kurdistan Regional Government (KRG), Massoud Barzani, was only maneuvering to negotiate a better deal with the central government in Baghdad with respect to the region’s autonomy — on both the political and the economic side. Iran thought that Barzani was looking for Iranian-Turkish support for future talks, while already having an American green light to escalate to the edge of the abyss, and that things would then be better.

This was the case when Iranian Chief of General Staff Mohammad Bagheri visited Ankara and met with high-level Turkish officials and President Recep Tayyip Erdogan in August. And even when Quds Force commander Qasem Soleimani visited Iraqi Kurdistan to convince the Kurdish leadership to “delay the vote,” Tehran was still dealing with the whole story from a perspective that could easily be described as one of denial. This policy continued until the moment the Kurds announced that the referendum returned a big "yes," with almost 93% of votes in favor of independence.

Barzani had killer timing: The whole region is apprehensive of taking any step toward a new escalation, with crises already igniting in Iraq, Syria, Yemen and the Gulf. Therefore, it was clear to the Kurdish leader that it’s either now or never. Now that the referendum has been held, what are the dynamics that are to follow this historical change? And how is Iran as a nation — and its powerful Islamic Revolutionary Guard Corps (IRGC) — going to deal with it?

Despite the ideological crust that covers Iran’s politics, it could be said that Iranian diplomacy enjoys an amount of pragmatism that allows it to cope with changes. This was the case when the United States invaded both Afghanistan and Iraq in 2001 and 2003, respectively, and the series of events that have taken place in the region since then. Even when it comes to existential battles such as the one in Syria, Iran made the decision to fight until the end while preserving a line of dialogue with other players, directly or through mediators. This was what Barzani believed would occur in the aftermath of the referendum. Therefore, he felt confident that neither Turkey nor Iran would be able to take any dramatic action. Still, this doesn’t mean the two powers aren’t going to take action at all, especially since both countries regard the Kurdish move as a threat to their national security.

To Iran, the referendum will have dire consequences on the future of neighboring Iraq. Having a Kurdish state could prompt the Sunnis to call for a referendum of their own, thus Iraq would cease to exist and would be replaced with three shaky sectarian or ethnic states. Kurdistan is a step toward “Shiitestan” and “Sunnistan” in Iraq. The border is a main concern for Tehran, especially because some Iranian Kurdish separatist groups function in border regions and have resumed their fight against the IRGC. Since 2016, several attacks have been launched by groups whose headquarters are located in Iraqi Kurdistan. Now that the Kurdish region is planning to continue moving toward independence, Iran is going to be very concerned that these groups’ activities might have an impact on the internal Iranian front.

Ahmadi explained that the KDPI enjoys what he called “tactical and strategic patience,” yet he stressed that, “with an enemy like Iran, you need to take advantage of every opportunity to weaken the regime.”

The cautiousness in dealing with the Kurds in Iran has been a challenge for the Iranian state for the past 100 years. This is not an issue related solely to the Islamic Republic or the Pahlavi dynasty, but rather a grander question. The Simko Shikak revolution in 1918-1922, the Kurdish Republic of Mahabad in 1946 and the insurgency that ignited after the Islamic Revolution in 1979, all together tell the story of the Kurdish dream not only in Iran, but in Iraq, Syria and Turkey. A dream that’s regarded by the aforementioned states as a nightmare that no one wants to think of because it means the formation of a new entity, or new entities, while transforming the affected countries from strong, multiethnic states into weak and threatened ones.

When it comes to countering the results of the Kurdish referendum, neither Iran nor Turkey will act on their own; rather, both will move together. On Oct. 4, Erdogan visited Iran to discuss issues of mutual interests — and the Kurdish issue was very high on the list. Both Erdogan and his host, President Hassan Rouhani, expressed dismay toward the Iraqi Kurdish state. While Rouhani said at a joint news conference, “We will not accept changing borders in the region,” Erdogan warned, “A development of this sort will isolate the Kurdish regional government.” He added, “From this moment onward, more decisive steps will be taken.”

A source close to the IRGC told Al-Monitor on condition of anonymity that the Kurdish referendum dilemma could be the challenge that will induce Turkey, Iran, Iraq and some other allies to actually cooperate on the ground. “For years, these parties were facing each other in Syria, directly or indirectly. The challenge of the Kurdish referendum is being transformed into a serious opportunity.” Information acquired by Al-Monitor indicates that the first step could start from Kirkuk, given its status with respect to Iraq, and the fact that the KRG’s occupation of the area was seen as illegitimate by the Iraqi authorities and the international community.