Iranian Kurds fighting IS in Iraq put Tehran on alert

Iran appears increasingly alarmed about the Iranian Kurdish separatists who are fighting the Islamic State alongside Iraqi Kurdish peshmerga. 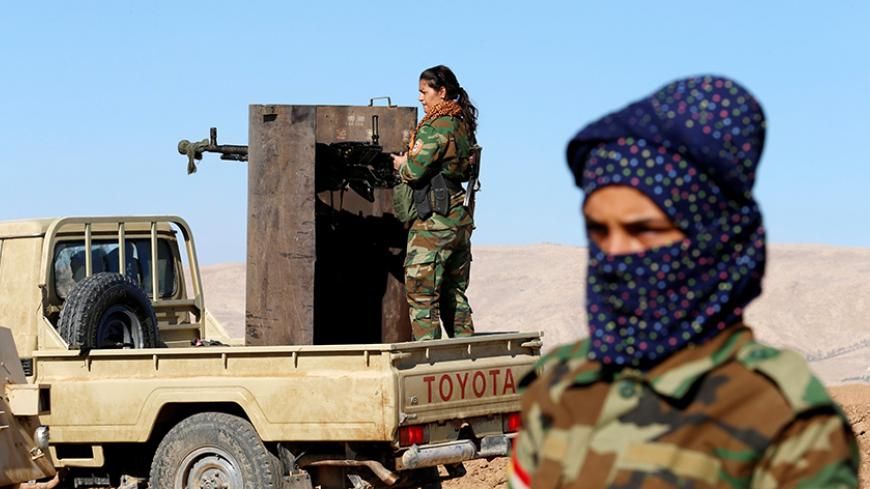 On one front, opposing sides have joined forces to fight the Islamic State (IS). The enormous differences among the de facto allies reflect how much each sees IS as an existential threat, and the importance they attribute to Iraq. While US warplanes carpet bomb positions of the group in Mosul and its surroundings, Iraqi security forces, Iran-backed Popular Mobilization Units and Iraqi Kurdish peshmerga all advance.

Iranian military commanders from the Islamic Revolutionary Guard Corps (IRGC), though outside the spotlight, lead the Popular Mobilization Units and are keen to achieve a victory that could be built upon in the broader regional strife. Yet, they aren’t the only Iranians on the Iraqi front. A group of Iranian Kurdish separatists opposed to the Iranian government is reported to be fighting alongside the Iraqi Kurdish peshmerga, the armed forces of the Kurdistan Regional Government (KRG), which is also an ally of Iran. The Iranian Kurdish group is made up of several movements, including the Kurdistan Freedom Party (PAK) and the Democratic Party of Iranian Kurdistan (KDPI).

“A special forces team from our peshmerga forces, tasked with clearing land mines and other explosives, has been deployed to the front line against IS outside Mosul,” said KDPI spokesman Loughman Ahmadi in an interview with Al-Monitor. In his telling, “It is a national duty to defend all parts of Kurdistan, and IS is currently posing a threat to [Iraqi] Kurdistan.” He added, “Our peshmerga forces have more than 70 years of military experience. We have not received any military training by anyone except our own instructors. We are not under any ‘umbrella.’ Our special forces are helping the peshmerga forces of the KRG.”

A Sept. 8 report by the Associated Press quoted Hussein Yazdanpanah, a commander of the military wing of the PAK, as saying that his group has received military training and support from the United States as part of the international program to back Kurds in the war against IS in Iraq. Yazdanpanah added that the fight against IS "was never an alternative to their struggle" against the Iranian government. The KDPI spokesman added in his interview with Al-Monitor, “Iran sees us as one of its main enemies and would take every opportunity presented to attack us. The IRGC's ground force commander stated previously that Iran will attack members of our party and our peshmerga forces wherever and in whatever country they can.”

A senior Iranian official who spoke on condition of anonymity told Al-Monitor that Tehran has voiced its concern in a message to KRG President Massoud Barzani, without giving further details. Another Iranian official who asked not to be identified revealed that the Iranian message was direct and pointed: “Tehran won’t tolerate any threat to its border or any attempt to infiltrate our territories. The KRG will be held responsible for any threat from their side, and this will have dire consequences on our relations.” The Iranian official emphasized that Iran wants to maintain good relations with its Kurdish neighbors, but added, “We are looking forward to seeing the same eagerness from their side. It’s not acceptable to see terrorist groups at large and even taking part in the war on terror when they themselves are terrorists.”

On Nov. 7, a top military adviser to Iranian Supreme Leader Ayatollah Ali Khamenei was quoted as having warned the KRG against cooperating with a Saudi agenda of arming Kurdish separatists fighting the Iranian government. Rahim Yahya Safavi, who previously served as the commander of Iran’s IRGC, said, “We warn the Barzanis against allowing the Saudi consulate to supply arms to anti-Iranian [groups] in Northern Iraq.” He added that the Barzani family should not forget “they are indebted to Iran," saying, "The Iraqi Kurds should be mindful that if they enter political games against Iran, then they should not expect any more help from Tehran.”

A KRG statement dismissed the Iranian claims and warned that they could damage bilateral ties. The statement read, “We declare here loud and clear that all the remarks by Yahya Rahim Safavi are incorrect and baseless.” It stated that the KRG hopes that Safavi’s words do not reflect the official position of the Iranian government, with which Erbil has a joint security committee in which issues of concern should first be discussed. The statement went on that the KRG was surprised by Safavi’s comments, as no such issues had been discussed in the joint committee.

Even though Safavi is known for his controversial stances, it’s important to understand the reasons behind the Iranian concern over the activities of Kurdish separatist groups on the other side of the border. The Islamic Republic fears that these groups could be exploited by its enemies to create a nightmare on its borders and even within the country. An Iranian military source told Al-Monitor on condition of anonymity, “Iran is right now facing several threats, one from [IS] and the other from the separatist groups, and unfortunately these threats are coming mainly from the western borders. Therefore, Iran will do whatever possible on the ground to prevent the destabilization of its national security. But [our] friends are also expected to play a positive role and not give our enemies the chance to hit us in the back.”

The history of Kurdish separatism efforts is putting those concerned about Iranian national security on high alert. Indeed, it is not only Iran that is concerned, but also Turkey — and this is one of the main reasons that the two nations have come together in the last few months. The memory of the “Simko Shikak” revolt between 1918 and 1922 and later 1926, the 1946 establishment of the Republic of Mahabad in western Iran and separatism in the aftermath of the 1979 Islamic Revolution all point to similar dynamics: Separatism flares when there are international or regional shake-ups, or when the country is going through transitions. These years in the Middle East are a time of change and it might be that the momentum gained by the Syrian Kurds as they grew closer to announcing their regional government in Rojava before the Turkish intervention produced such a chance.