The other Iranians fighting in Iraq 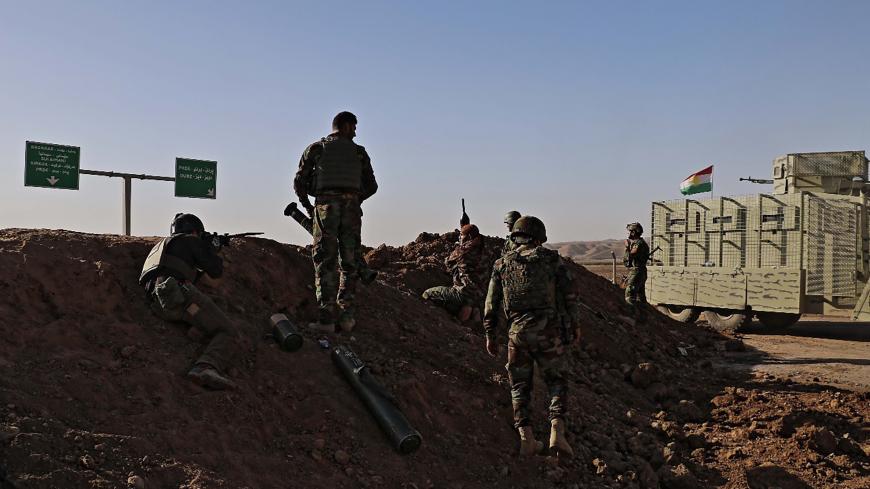 Members of the Kurdistan Freedom Party (PAK) peshmerga look out from behind a berm in Altun Kupri, also known as Prde in Kurdish, Oct. 20, 2017. - Hanna Noori

As Kurdish defenses collapsed in Kirkuk province on Oct. 16, the top leadership of Iraq’s Popular Mobilization Units (PMU), a critical part of Baghdad’s offensive to recapture the disputed areas, received an urgent call from Iran’s Islamic Revolutionary Guard Corps (IRGC). According to a senior source within the PMU, there was a request: Dispatch a unit to kill or capture a battalion of peshmerga stationed in the village of Kharabarut, near the oilfields of Bai Hassan and Avana in Dibis. Two senior Kurdish commanders confirmed to Al-Monitor that they were aware of an effort by Iran to hunt down this specific peshmerga, but did not know which Iraqi force was involved.

The peshmerga fighters who were about to be targeted were exclusively Iranian: members of the Kurdistan Freedom Party (PAK), an Iranian Kurdish opposition group with the stated aim of fighting Tehran to establish a Kurdish state. The group is a strong ally of the Kurdistan Democratic Party (KDP) of Massoud Barzani, and it is seen by Iran as a threat to its interests in Iraq.

“We realized in the afternoon that the other peshmerga around us had retreated,” Saiwan Sahrayi, a prominent PAK commander, told Al-Monitor on the front line near Kirkuk, referring to the events of Oct. 16. "We packed our things and left around 2:30 p.m., but we could see from the distance that our base was bombed shortly after we left.”

The unit that swooped in to target the PAK, according to the PMU source, belonged to the al-Abbas Combat Division (Firqat al-Abbas al-Qitaliyah). While it is unclear why it was chosen for the task, it notably has a commando battalion.

The PAK peshmerga pulled back to Altun Kupri, a Turkmen-Kurdish town bisected by the Little Zab River, 50 kilometers (31 miles) south of Erbil, where they would face the Iraqi forces four days later. IRGC commanders hoped to strike a deadly blow at their fellow Iranians, just as they had done in Iraqi Kurdistan in the past.

In one such incident, as 5,000 civilians lay dead following chemical gas attacks in Halabja in March 1988 by the Iraqi regime of Saddam Hussein, the IRGC, which had seized the Kurdish town a few days earlier, tracked down a battalion of peshmerga from an Iranian Kurdish opposition group and killed or captured all except for two, who escaped to tell the tale. But on Oct. 16, the IRGC failed to strike a deadly blow to PAK, whose fighters have honed their skills fighting Islamic State (IS) militants for the past three years in the vicinities of Mosul and Kirkuk.

In the chaos of Baghdad’s offensive against the Kurds, many groups and individuals with various loyalties were pitted against each other. In the early hours of Oct. 20, a 30-year-old American volunteer was sleeping alongside a group of PAK peshmerga behind a berm in Altun Kupri — along with two former British soldiers — when mortars and shells started falling all around them. The Iraqis, buoyed by their seizure of Kirkuk four days earlier, were on the offensive again, now pushing toward Erbil, the capital of the Kurdistan region. The battle that day, which lasted for over 12 hours and resulted in a halt to the Iraqi forces’ advance, is now the stuff of legend in the Kurdistan region. What is little known is that at the heart of it were the very Iranian PAK peshmerga that had withdrawn from Dibis only four days earlier.

As the battle intensified on Oct. 20, the American trooper — Ryan O’Leary, a former US Army sergeant who has volunteered with various groups of Iranian Kurds for the last three years — set up an 81 mm mortar tube aiming at the area where an Abrams tank was firing. "I fired the first five or six mortars and then I handed over the operation to the PAK peshmerga," O’Leary, who served in Iraq in 2007-2008 at the height of sectarian war, fighting a cluster of terrorist groups and sectarian militias, told Al-Monitor. Soon afterward, the Kurds fired a guided missile and destroyed the American-made tank. “We destroyed two tanks, including one Abrams, and 11 Humvees,” Kamal Kirkuki, the commander in Altun Kupri, told Al-Monitor. Asked what missile system was used to destroy the Abrams and the Humvees, he said, “I am not going to tell you with what we hit them.” 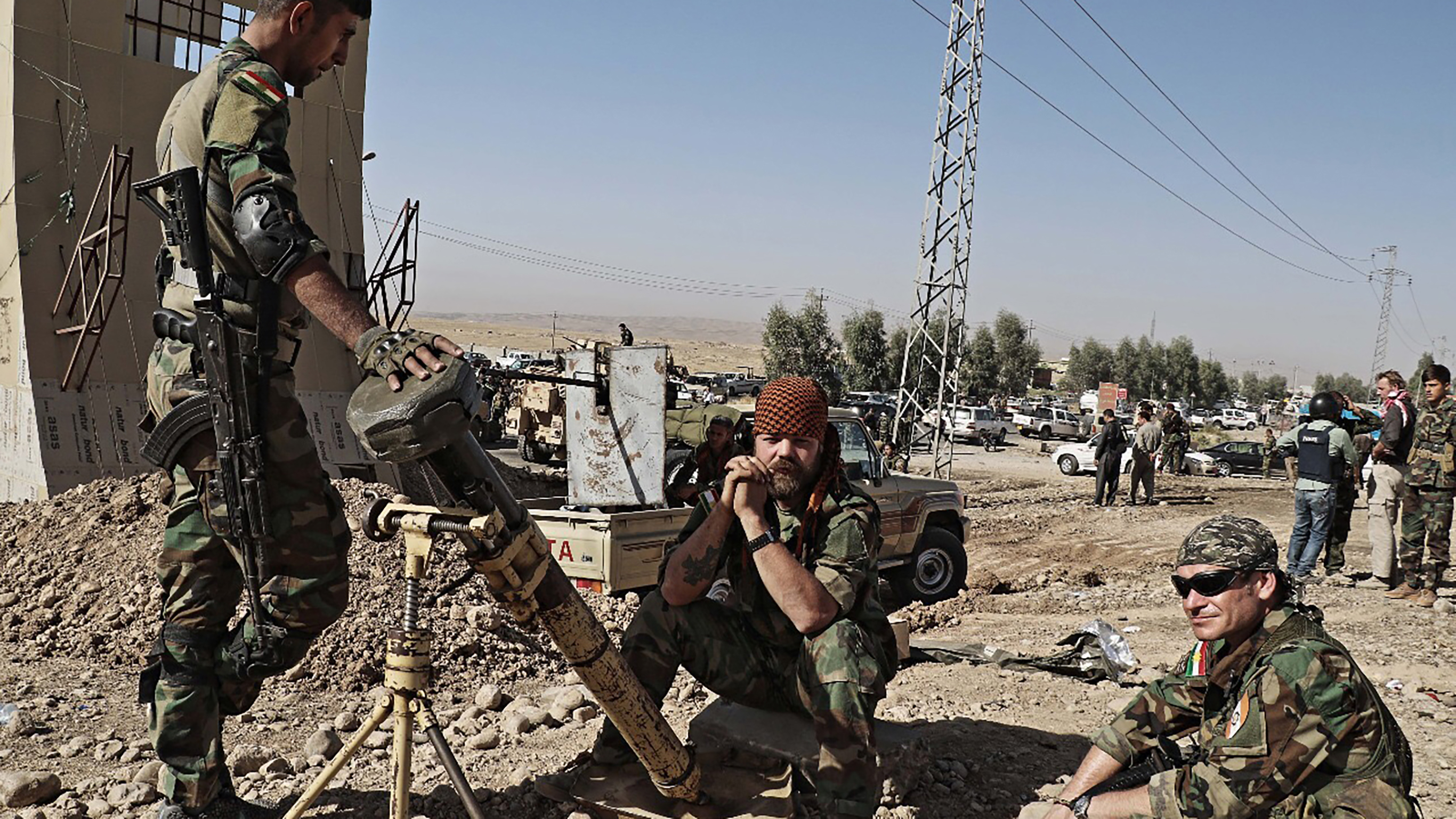 "PAK peshmerga are one of the best groups fighting on my front line,” Kirkuki, who has had Iranian fighters under his command for three years in Dibis, said. "The stretch of land they guarded was always very secure." In the battles in the area between Kirkuk and Erbil, PAK used a variety of weapons, including Russian and other weapons supplied by the anti-IS coalition.

PAK’s fighters are headed by a 51-year-old Iranian Kurd with a long, bushy moustache. "I have been a peshmerga since I was 13," Hussein Yazdanpanah told Al-Monitor on the front line just outside Altun Kupri on Oct. 29. "We'll fight in any part of Kurdistan that needs us," he said. PAK was set up in Iraqi Kurdistan by Yazdanpanah's brother, Saeed, in 1991. It was established as a party whose ultimate aim was to set up a single Kurdish state that includes parts of Turkey, Iraq, Syria and Iran, where tens of millions of Kurds live. "My brother was assassinated four months after he set up the party by Iranian agents in Sulaimaniyah," Yazdanpanah said. "We are still fighting the Revolutionary Guard and Abu Mahdi al-Muhandis here in [Altun Kupri]," said Yazdanpanah, referring to the deputy commander of the PMU.

PAK commanders refused to divulge their strength, but they are estimated to be made up of around 1,000 battle-hardened young Iranian Kurds — including 200 women. Each fighter receives 20,000 Iraqi dinars ($17) a month to buy toiletries and the like.

O’Leary and a number of Iraqi Kurdish peshmerga described the PAK fighters — both men and women — as a “highly disciplined and agile" force that can maneuver its various small units fast in the battlefield. “I think the PAK peshmerga are more disciplined. They are a professional force,” O’Leary said. “But they need more training in mortar systems.”

Over three years of fighting IS, PAK lost 13 men with 31 wounded. In Altun Kupri, half a dozen of its fighters were injured. "Last December, my younger brother was a lookout guard facing Hawijah when he was hit by a Daesh [IS] sniper," Deldar Mohammadi , a 36-year-old who has fought for PAK for two years and prior to that spent three years in Iranian prisons for political activism, told Al-Monitor.

“I don’t believe in federalism as a solution for the Kurdish issue,” said Yazdanpanah, who does not hide the fact that, for him, the enemy is Iran. “For us, the real battlefield is Rojhalat," referring to the Kurdish-inhabited region of Iran by its Sorani name.