Not everyone in Iraq welcomes peshmerga's possible return to Kirkuk

As Iraq's central and Kurdish governments tentatively make nice again, the potential return of the Kurdish peshmerga to Kirkuk has some groups in the country on edge. 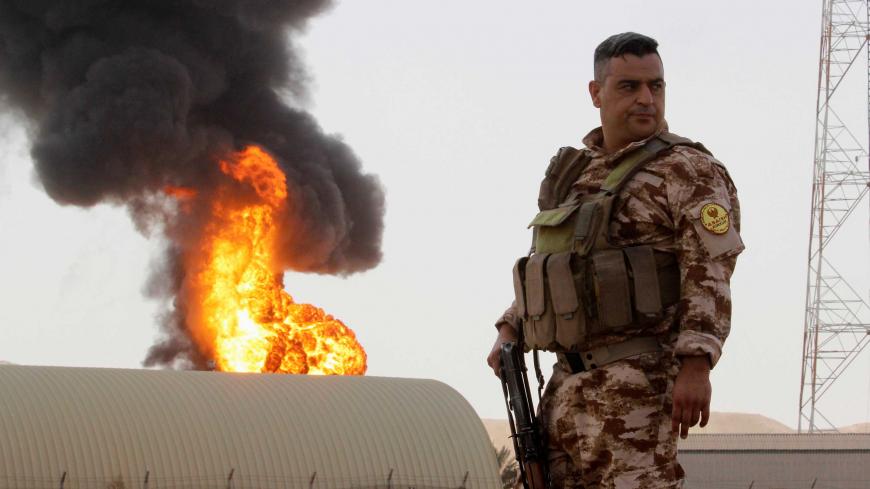 A member of the Kurdish peshmerga forces stands guard as smoke rises after an attack at the Bai Hassan oil station, northwest of Kirkuk, Iraq, July 31, 2016. - REUTERS/Ako Rasheed

Iraq's central government in Baghdad and the Kurdish Regional Government (KRG) in Erbil agreed to establish a joint security checkpoint on the main Erbil-Kirkuk road, which is being repaired. The agreement marks the first such arrangement between the two sides since the Iraqi army reclaimed the disputed Kirkuk area from the Kurdish peshmerga (militia) in bloody confrontations in October.

The Aug. 9 agreement is part of a larger deal that includes a temporary iron bridge just completed Aug. 16 in the town of Altun Kupri on the Erbil-Kirkuk road, to replace the structure that was heavily damaged in the Oct. 16 clashes. Completing the bridge now allows further repairs to the road, which authorities expect to open in time for Eid al-Adha (the Festival of Sacrifice) holiday that begins Aug. 21.

“There have been several meetings between the Kurdish and the federal sides in the cities of Kirkuk, Baghdad and Altun Kupri to reach a common [security] agreement in the area," Maj. Gen. Salar Timor, commander of the Kurdish elite forces in Kirkuk, told Al-Monitor.

“It's been agreed that Kurdish forces will inspect vehicles and individuals coming from Kirkuk to Erbil, while the federal forces will handle the inspection of individuals and vehicles leaving Erbil en route to Kirkuk,” he added.

Some media have reported that the United States is pressing Baghdad to begin military cooperation with the Kurdish side, including allowing peshmerga forces to return to the Kirkuk area because of deteriorating safety conditions there. The Iraqi government denied these reports.

Michael Knights, a senior fellow at the Washington Institute for Near East Policy, told Al-Monitor, “There is no pressure from the US in this direction." However, Knights, who advises the US Department of Defense on Iraq, does think it likely the peshmerga will be allowed to return.

The Defense Department and the United Nations estimate there are still 20,000 to 30,000 Islamic State (IS) fighters in Iraq and Syria who could be regrouping.

"There is a lot of pressure on Iraqi forces," Knights said. "Therefore, the Iraqi leadership intends to withdraw the Golden Division [counterterrorism forces] from Kirkuk, because this highly efficient force could be more useful in other areas, where needed,” he said. Then, “the peshmerga forces [can step] in to help restore security there."

According to Timor, security in the area deteriorated with the withdrawal of the Kurdish forces, which had a strong grip on the area before the events of October.

In a surprising turn of events, the Badr Organization, the largest segment of the PMU, announced its conditional approval for the peshmerga to return. The PMU, which has ties to Iran, fought against the peshmerga in October.

“The Badr Organization in the north axis doesn't mind the return of the peshmerga force to Kirkuk province, provided that they remain under federal government control and under the supervision of the leadership of the operation in Kirkuk and the commander in chief of the armed forces,” Mahdi al-Bayati, an official of the northern branch of the organization, said Aug. 14.

The return of Kurdish forces to Kirkuk and its outskirts is likely to face considerable opposition from several parties in the country. Arshad Salehi, head of the Turkmen Front, said it categorically rejects the peshmerga's return.

Some PMU factions consider the idea a betrayal, especially since the announcement of the joint coordination between the Iraqi government and the KRG in Altun Kupri, which came in tandem with the central government's announcement that it is withdrawing the PMU from Ninevah province.

“I have already told you. We were betrayed by our own people. The peshmerga are coming back. This is treason to Iraq,” said Ayyub Faleh Hassan al-Rubaie, a prominent leader in the PMU's Imam Ali Brigades. The leader, better known as Abu Azrael (Angel of Death), spoke in video footage that was shared Aug. 13 on social media.

All these changes are likely to affect the balance of power in the disputed areas, after the scales were tipped in October in favor of the central government. The strong opposition of several parties to the return of the Kurdish forces doesn't bode well for peace in the disputed oil-rich city of Kirkuk.