Friction is growing between Iraq and the Kurdistan Regional Government as the latter's independence vote approaches. 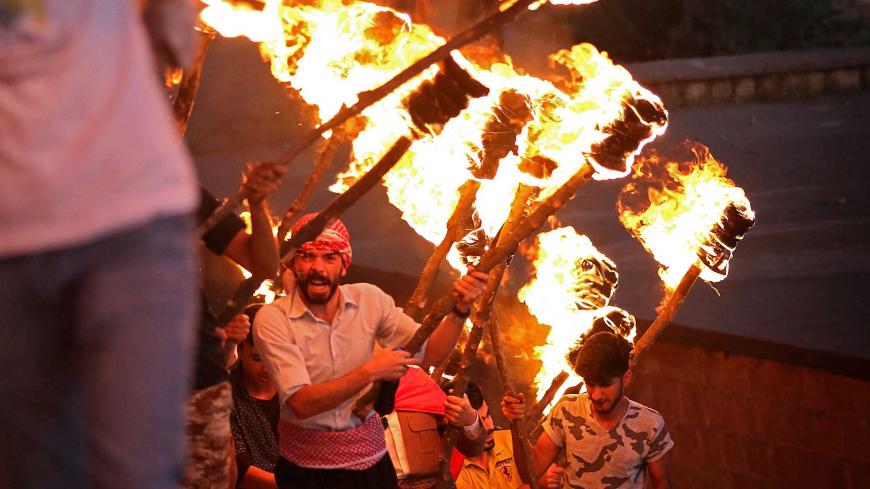 Iraqi Kurds wave Kurdish flags and hold burning torches as they walk up a mountain during a gathering to show support for the upcoming independence referendum, in Akre, Iraqi Kurdistan, Sept. 10, 2017. - SAFIN HAMED/AFP/Getty Images

As the Kurdish independence referendum draws near in Iraq, a war of words is threatening to grow into violence. Some Iraqi paramilitary factions under the Popular Mobilization Units (PMU) are increasing their warnings against the vote, and some Kurds are responding with talk of resorting to weapons. Iraq’s parliament voted Sept. 14 to dismiss the governor of Kirkuk province, who favors Kurdish independence, and the Kurdistan Regional Government (KRG) responded by announcing it is ending its partnership with Baghdad.

Reuters reported that the decision to remove the governor, Najmaldin Karim, "comes after Kirkuk — an oil-rich province claimed by both the central government in Baghdad and the autonomous Kurdish region in northern Iraq — decided to take part in a referendum set for Sept. 25 on Kurdish independence."

Meanwhile, Karim is ignoring his ouster. This all could lead to a new spiral of violence even before the country rids itself of the Islamic State (IS).

The Imam Ali Division, an armed Shiite faction in Iraq backed by Iran and very close to former Iraqi Prime Minister Nouri al-Maliki, warned Sept. 3 that it will attack Kirkuk if the city is annexed to Kurdistan or to whatever independent state that might be established as a result of the referendum. The division's spokesman, Ayoub Faleh (also known as Abu Azrael), hinted that Iran has given the unit the green light to attack Kirkuk if it decides to secede from Iraq.

“Kirkuk belongs to Iraq," Abu Azrael said. "We would by no means give up on Kirkuk even if this were to cause major bloodshed." Abu Azrael confirmed he was speaking in his official capacity as the faction's spokesman and commander of its special forces.

Hadi al-Amiri, secretary-general of the Badr Organization, an Iraqi political party close to Iran, said his group also will take up arms if Kurdish parties pursue their separatist projects. “We will resort to arms if we [as Iraqis] establish a federal system on an ethnic or sectarian basis,” Amiri said in a Sept. 4 interview with the Kurdish channel Rudaw.

Iran is fiercely opposed to Kurdistan's independence projects, including the referendum, and is particularly against Kirkuk’s participation. On Aug. 30, Iranian Foreign Ministry spokesman Bahram Qasimi said the decision to include Kirkuk in the referendum is a serious and provocative issue.

Maysam Behravesh, an expert on international relations at Sweden's University of Lund, told Al-Monitor by phone, “Given Iran's troubled history with Kurds inside and outside of its territory, it will not tolerate a newborn Kurdish independent state, and one presumably close to its arch-foe Israel at that."

Behravesh, who closely follows Iran's foreign policy, added, “I think if the Kurds either declare independence or take Kirkuk out of Iraqi hands, Iran will be unlikely to intervene directly to oppose or reverse these moves. Yet it will probably act by proxy and unleash its Shia paramilitary forces against the Kurdistan government."

On Sept. 12, the Iraqi parliament passed a resolution opposing the referendum and asked the administration to order all necessary measures to protect Iraq's territorial integrity. The Kurdish parliamentary blocs refrained from voting on this issue. Not all Kurds support the referendum.

Yet the Kurdish parties take these threats seriously. Mahmoud Senkawi, a commander of the Kurdish peshmerga forces and member of the Patriotic Union of Kurdistan's (PUK) political bureau, warned Sept. 8 against an attack on Kirkuk on the day of the referendum, calling on Kurdish parties to take caution.

KRG President Massoud Barzani said in a Sept. 9 TV interview that Kurds are ready to respond in kind should any party enter Kirkuk by force.

Many Kurdish parties believe that Iraq's deployment of forces outside the city of Hawija in preparation for that city’s liberation from IS poses a threat to thec city of Kirkuk. Once Hawija is liberated, Iraqi forces will be only about 50 kilometers (31 miles) southwest of Kirkuk city.

Iraqi Prime Minister Haider al-Abadi said during his weekly press conference Sept. 6 that Hawija's liberation will be in the hands of Iraqi forces and will not involve peshmerga forces. In other words, Kurdish forces are not to advance from their current positions as Iraqi forces move toward them.

Zebari told Al-Monitor that Shiite factions cannot control Kirkuk. “Kirkuk is a sacred city for Kurds, which is why authorities in Kurdistan have taken care of it. There are large forces with sophisticated weapons in Kirkuk, not to mention the strong will of the peshmerga forces in comparison with [Iraq's] [PMU], which lack a unified command.”

He added, “It is difficult for them to control Kirkuk, as the geographical location of Kirkuk and its outskirts favors the peshmerga forces. We are on the defensive, and they are on the offensive."

This view was supported by Hassan al-Hajjaj, director of the Tactical Experts Cell, which deals with military and security issues in Iraq.

“There are peshmerga units that are well-trained by US and German forces. Although their tanks are old, these units have heavy weapons, heavy machine guns and modern anti-tank missiles,” Hajjaj told Al-Monitor.

But this does not mean that Iraq's pro-Iranian PMU can't threaten Kirkuk. Hajjaj said, “These factions have the same weapons that the peshmerga forces have, but in smaller quantities. This is why these factions do not seem to have the strength to control the city of Kirkuk, especially considering that the peshmerga forces have a popular base in this city. [The PMU] can, however, attack areas such as Tuz Khormato, which is not fully controlled by the peshmerga. Add to this that the PMU is popular among the Turkmen Shiites in these areas.” In recent years, some Shiite factions clashed on several occasions with peshmerga forces in Tuz Khormato, south of Kirkuk.

Conflicts of interests and goals will seemingly lead parties that fought IS together to point guns at each other and prevent Iraq from enjoying a period of peace following decades of devastating wars and crises.