Prime Minister Benjamin Netanyahu is a master at using his UN speeches to convince his Israeli electorate that he is the only person capable of defending the country from the Iranian threat. 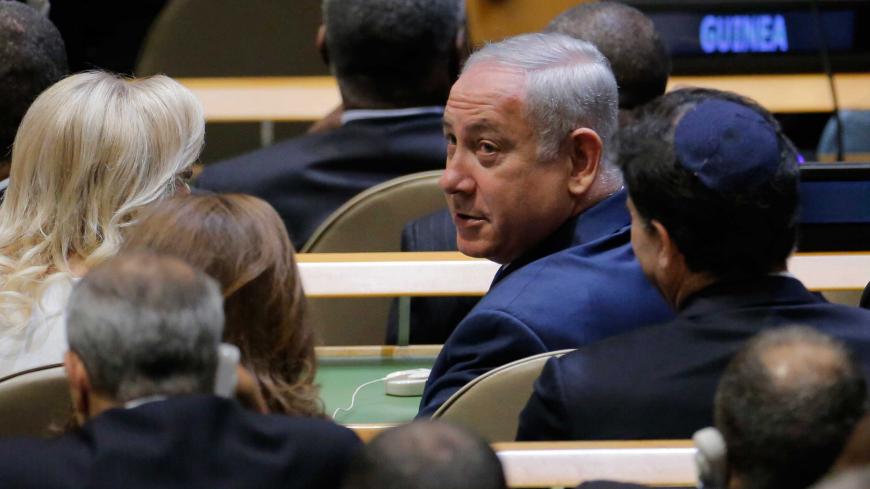 Even Prime Minister Benjamin Netanyahu’s opponents were forced to admit that his Sept. 19 speech before the UN General Assembly in New York was a true masterpiece. It was a polished performance that included all the elements on which Netanyahu built his leadership: national pride, reprimanding non-Jews and Israel’s enemies, preaching ethics to the entire globe, and even quite a few punchlines that coaxed smiles and even ripples of laughter from the audience. But above all this in importance, the Iran issue was supreme.

Two years after the signing of the nuclear agreement between Iran and the P5+1, Netanyahu has brought the nuclear threat back to center stage. Or at least, he is trying to do so. An end-of-the-Jewish-year poll by Maariv newspaper showed that contrary to last year, when Iran did not appear on the list of threats that worry the average Israeli, the issue has clearly made a comeback, thanks to Netanyahu. In the poll, Iran lags behind on the list of threats with only 4% support, but this is only the beginning. We can count on Netanyahu that by next year, Iran will occupy a much-advanced place at the top of the list of important strategic threats to the existence of the Jewish state.

Netanyahu’s speech came after his historic tour of Latin American countries, which no other Israeli prime minister had ever officially visited. The visit with its various official receptions was leveraged by Netanyahu’s associates and widely displayed in the media. Even his trip to New York for the UN General Assembly meeting was part of a well-thought-out strategy in which Netanyahu presented himself as a rare super-diplomat, to which all the world’s palaces are open and for whom the leaders of the free world wait in line to see. After all, he is the only one able to invite himself over to Russian President Vladimir Putin on short notice, to call President Donald Trump “my friend” and to mix with European leaders to his heart’s content.

During the Jewish New Year (right after the Latin American tour and the UN speech), the foreign media announced that Israel had conducted another assault on Syrian territory against ammunition stockpiles intended for Hezbollah. Immediately after the holiday, Haartz newspaper published that Netanyahu revealed to his Cabinet ministers on Sept. 24 that Trump’s peace initiative is alive and well. All those who eulogized the president’s bombastic peace declarations and believed that Israel was facing a calm, quiet period, free of annoying peace issues was mistaken. Senior White House adviser Jared Kushner, despite internal political problems in the United States, continues to diligently work on the peace program. The indefatigable US envoy Jason Greenblatt is expected to return again soon to the region, for a series of additional talks.

All this sends a clear and focused message: Israel has no justification to rest on its laurels and take it easy. Everything is on fire: the front between Syria and Lebanon is more fragile than ever; the Iranians are practically sitting on our fences; and a dangerous peace initiative is on its way.

Usually we say that when Netanyahu speaks to the UN General Assembly or the US Congress, his real audience is Israel. And this audience includes not only the prime minister’s right-wing political base, but all the other Israelis who watch their brilliant presenter with sparkling eyes. But this time we can add to this working premise two more types of audiences:

The first are the Likud people and the parties that are members of the coalition. Netanyahu is trying to demonstrate his greatness to them, his command of the issues and the fact that no one else (in Israel’s current situation) is capable of stepping into his shoes. Therefore, he is bringing up again the threat of Trump’s peace initiative, even though no one really knows whether anything will come out of it. Netanyahu knows that the Likud members know that only he is capable of exhausting and manipulating Trump, should the latter insist on trying to make peace between Israel and the Palestinians. That is how he manipulated President Bill Clinton in his time, and that is how he exhausted President Barack Obama over eight long years. Netanyahu is sending signals to all those plotting to replace him in the governing party to take it easy. Not one of them has hands that are capable of steering the Israeli ship, which is currently navigating these stormy waters.

An additional audience, and perhaps even the most important audience of all, are the officials running Israel’s legal system and law enforcement apparatus. These include Attorney General Avichai Mandelblit, State Prosecutor Shai Nitzan and the prosecutor in charge of the Netanyahu investigations portfolio Liat Ben-Ari. Next to them are also Israel Police Chief Roni Alsheikh, seconded by the heads of the police investigation departments. Netanyahu is also sending them a clear message: I am the only leader capable of leading Israel, at this time. No one can replace me. This is an era in which Israel must maneuver the tight spaces between Putin and Trump, between North Korea’s Kim Jong Un and Iran’s Ayatollah Ali Khamenei, and between Syrian President Bashar al-Assad and Hezbollah Secretary-General Hassan Nasrallah. In this day and age, Israel needs an experienced, cunning and cruel diplomat like me, Netanyahu. All your attempts to oust me because of a few Champagne bottles my spouse received, or a few cigars that I smoked, will fail miserably.

This is Netanyahu’s survival strategy in a nutshell. He knows that the moment of truth is approaching, when the Israeli police must decide whether to file one indictment (or more) against him. He knows that next in line, after the police, is the attorney general, who will have to decide what to do: whether to reject the indictment recommendation and close the file or adopt it and file a severe indictment against a prime minister in active office.

Given this state of affairs, Netanyahu must preserve the coalition and close ranks in the Likud. He wants to act in advance to avoid coming to the same fate as former Prime Minister Ehud Olmert. In 2008, Olmert was given an ultimatum by then Defense Minister Ehud Barak, his main coalition partner, in light of the media-covered police investigations that were taking place against Olmert. Netanyahu swore that this wouldn’t happen to him. He already announced that he would remain prime minister even if he is indicted. To make sure that this will pass the reality test, Netanyahu needs total loyalty in the Likud and tight discipline in the coalition.

Netanyahu is using psychological pressure against Mandelblit, who had served as Netanyahu’s Cabinet secretary. His goal is to convince him that the various issues under investigation are dwarfed by the appalling dangers faced by the Jewish people and its state. Netanyahu knows Mandelblit very well and understands the inner doubts that the attorney general will face when he has to make his fateful decision. So the prime minister is trying to affect the results. His chances of success are unclear.

In the coming days, former US ambassador to Israel, Dan Shapiro, will testify to the Israeli police. Shapiro will be asked about the pressures that Netanyahu inflicted on previous Secretary of State John Kerry to give billionaire Arnon Milchan a long-term visa to the United States (the one he had was revoked). These facts, together with additional testimonies recently taken from billionaires Milchan and Len Blavatnik, turn Netanyahu’s chances of emerging unscathed from the “File 1000” investigation (on benefits allegedly received from businessmen) to be very slim.

One way or the other, he will fight until the last minute, and even afterward. That is Netanyahu: He never admits defeat.