Saudi Arabia's war on Yemen has allowed Iran more influence than ever in the region. 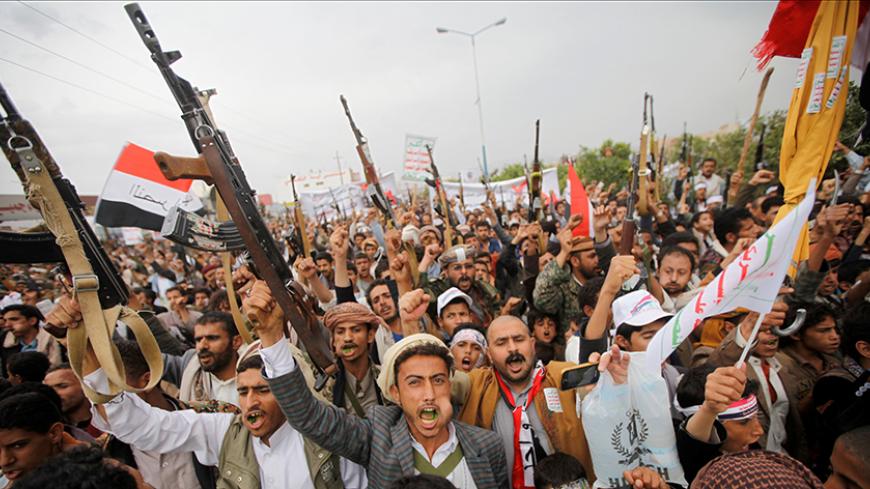 Armed followers of the Houthi movement protest the president's announcement of an extension of the state of emergency and the United States supporting the Arab alliance led by Saudi Arabia, Sanaa, Yemen, May 12, 2017. - REUTERS/Mohamed al-Sayaghi

Iran is gradually increasing its support for the Houthi rebels in Yemen. Rather than eliminating the Iranian presence in the country, the Saudi-led war is giving Tehran the opportunity to become more influential there than ever. The Houthis remain fiercely independent of Iran, but they will need Tehran's backing more as the stalemate continues.

The Iranian connection with the Houthi movement dates back over a decade, before the Arab Spring, to the battles between the Houthis and the government of President Ali Abdullah Saleh. Backed by the Saudis, Saleh tried to crush the Houthis in a series of military campaigns. Iran began providing training and expertise for the Houthi forces at camps in Lebanon run by Hezbollah and in Iran by the Islamic Revolutionary Guard Corps (IRGC). The Houthis openly emulated Hezbollah as a role model and successfully thwarted both Saleh and the Saudis. But Iran did not gain direct input into Houthi decision-making as it has with its Lebanese partner.

Iran reportedly discouraged the Houthis from seizing Sanaa in September 2015, fearing that would provoke civil war. With the help of former President Saleh, who switched sides by 2015, the Houthis did take the capital, which precipitated the crisis leading to the Saudi intervention. So far from being pawns of Iran, the rebels ignored its advice.

The rebels have also been quick to deny any plans for a future permanent Iranian military base in the country. When the commander of the Iranian navy suggested that Iran would acquire a base in Yemen, the Houthis rejected the idea. Observers in Sanaa report that the Iranian presence is hidden from view and operates discretely behind the scenes.

But it is growing. This spring, the powerful head of the IRGC's Quds Force, Gen. Qasem Soleimani, ordered a step-up in aid to the Houthis, including more advisers and experts on the scene and more technology-sharing with the Yemeni forces. Naval mines, anti-tank missiles and drones are among the items reportedly sent.

The most important assistance is ballistic missile technology and expertise. Yemen had bought Scud missiles during Saleh's reign and used them in the civil war in 1995. Iran has developed a large missile infrastructure and supplies Hezbollah with them. Last month, the Houthis fired a missile that they claimed was targeting a Royal Saudi Air Force base but that the Saudis claim was intended to hit Mecca. Saudi air defense systems intercepted the missile. With time and Iranian help, the rebels may be able to hit Riyadh.

The IRGC has suffered some casualties in Yemen. According to one study, at least 23 Iranian soldiers have been killed or captured and another 21 Hezbollah fighters have been lost. Iran is now also sending Afghan Shiite fighters to Yemen, just as it has done in Syria.

It is far more difficult for Iran to smuggle weapons and personnel to Yemen than to Syria or Lebanon. The ports are blockaded and the airports closed. Yemen has 2,700 kilometers (1,677 miles) of coastline and a porous border with Oman, so the Saudi blockade is not impenetrable. The Iranians are experts in the business of clandestine weapons smuggling.

For Tehran, the aid to the Houthis is a very inexpensive means to bog down the Saudi kingdom in a quagmire that has gone on for more than two years. For the Saudis, the war is far more expensive. A new Harvard study says it may cost Saudi Arabia as much as $200 million a day.

Iran's role in Yemen is likely to get more aggressive as the United States increases sanctions against Tehran. The Iranians see the United States and Saudi Arabia as more closely aligned than ever in a hostile and threatening entente against them — a view reinforced by US President Donald Trump's visit to Riyadh in May.

Yemen is a useful battlefield to weigh down the Saudis indefinitely. If the Americans can be dragged into the quagmire more deeply, even better. A war designed to weaken Iran is actually helping it against its regional rival.

It's in American interests to find a path to end the war soon. Our allies are squandering resources. The Yemeni people are paying a horrific price with mass malnutrition and disease. The immediate requirement is for an open-ended cease-fire and the lifting of the Saudi blockade. To ensure that the Iranians do not use a truce to massively resupply the Houthis, the United Nations should install monitors at airports and seaports to monitor traffic. The United States could assist by providing intelligence to the monitoring mission.