With help from the United States and the United Kingdom, Saudi Arabia’s blockade and airstrikes on Yemen have created the world’s worst humanitarian crisis. 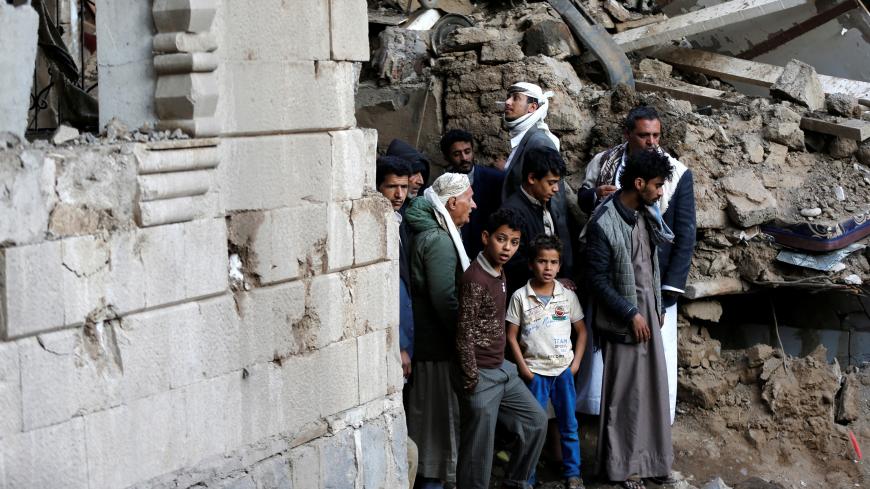 People gather at the site of an airstrike, Sanaa, Yemen, Nov. 11, 2017. - REUTERS/Khaled Abdullah

“We are trapped in hell!” Those are the words of a Yemeni friend this week in the midst of the Saudi aerial bombardment of Sanaa. The war is escalating with Houthi missile attacks and the tightening of the blockade. How long will the international community — especially America and the United Kingdom — let the world’s worst humanitarian crisis continue when they have the power to end it?

Yemen is the worst humanitarian catastrophe in the world. Thirty months of war by the richest Arabs against the poorest Arabs has led to mass malnutrition, famine and disease. Cholera is rampant. A generation of Yemeni children will be malformed. The BBC has documented the tragedy in a series of devastating reports. The United Nations says 7 million people are on the brink of starvation.

The Saudi-led coalition has tightened the blockade of rebel-held northern Yemen since the rebels fired a ballistic missile at King Khaled International Airport outside of Riyadh on Nov. 4. The Saudis claim it was intercepted by a Patriot missile. Observers reported considerable debris around the airport. Saudi Arabia called the attack an act of war committed by Iran, which allegedly supplied the missile to the Houthi rebels.

Yemen has had an indigenous missile force for decades. Former North Yemeni President Ali Abdullah Saleh bought Scud missiles from North Korea in the 1980s, while the South Yemen communist government got them from Russia. Both sides used them extensively in the 1994 civil war, so there is a trained Yemeni military missile capability. The Royal Saudi Air Force and UAE air campaign failed to address the missile problem despite extravagant claims to the contrary at the start of Operation Decisive Storm in 2016.

The United States has confirmed that Iran has assisted the rebels’ missile force since the war began. The Iranians and Hezbollah have successfully smuggled expertise and missile parts to Yemen to advance the indigenous capability. With their aid, the Houthi rebels have the capacity to produce more weapons. Riyadh and Jeddah in Saudi Arabia are already in range.

By their own public admission, the Houthis claim Abu Dhabi and Dubai in the UAE are next. One goal is to repeat what Hamas did to Ben Gurion Airport in Israel in 2014, which is to prompt the US Federal Aviation Administration to say the Gulf airports are at risk and cancel US carrier flights, even if only temporarily. The threat is a major driving force behind the Saudi/Emirati effort to take on Hezbollah in Lebanon. Saudi writers emphasize that Hezbollah provides the most assistance to the Houthis, including training in Lebanon. There Hezbollah has 120,000 rockets and missiles aimed at Israel, so it's a very dangerous game.

The potential escalation of the war to the cities of the Arabian Peninsula is another reason to find an end to this dangerous conflict sooner rather than later. The Donald Trump administration is not responsible for getting America into the war on the Saudi side. President Barack Obama made the decision to provide American intelligence and logistical assistance to the Saudis on his watch. While Obama did not share the Saudis’ hysteria about the Iranian connection to the Houthi rebels, he did little to stop the violence, and he backed the United Nations Security Council resolution that tilted the political process toward the Saudi position. Stopping the war early or preventing the Saudi intervention would have been much easier than trying to halt it now.

As Al-Monitor has reported, American logistical support for the war has increased this year, at least in terms of aerial refueling. Trump has given the Saudis a blank check in Yemen so far. While Congress is increasingly skeptical about the war, it has not withdrawn the blank check.

But Riyadh does not have a strategy to win the war. The front lines have barely moved in months. The Houthis show no sign of giving up. More airstrikes are not likely to bring a decision.

So the Saudi strategy by default is to rely on famine and disease to wear down the Yemeni people. All sides in this war are guilty of perpetuating a catastrophe, but the blockade and airstrikes are the principal cause of the famine and cholera. The Saudi government and leadership should be held accountable for their actions. A strategy of starvation is unacceptable.

America and Great Britain are in the best position to end the war. Washington and London provide the Royal Saudi Air Force and its allies with the munitions and spare parts that enable the air war. If those are suspended, the coalition would have to scale back or halt the air campaign. Better still would be a major diplomatic effort to help our Saudi ally find a way out of the quagmire that is creating a hell on earth.