Endorsed by Iran's supreme leader and sworn in at the parliament, Iranian President Hassan Rouhani begins his second term with a message of moderation and continued focus on constructive engagement with the world. 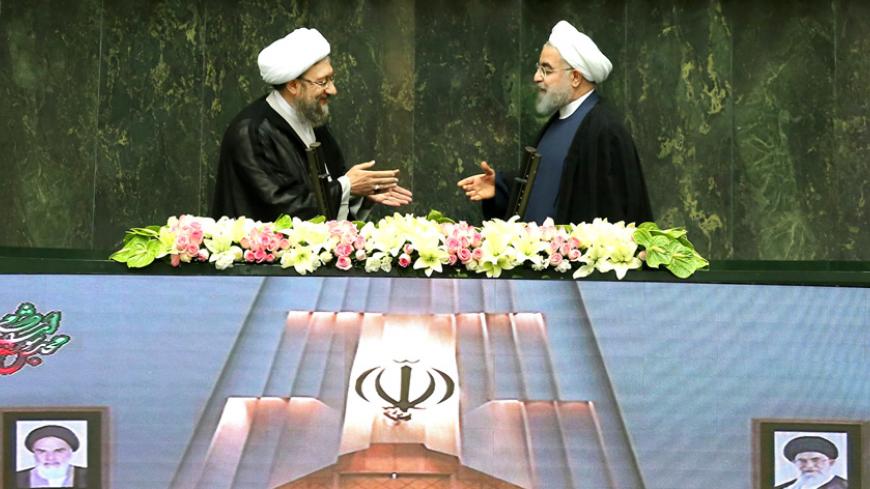 TEHRAN, Iran — When Hassan Rouhani first became president in 2013, he had a mentor: two-time President Ali Akbar Hashemi Rafsanjani. At the time, Rouhani's rivals hinted that the real president would be Rafsanjani, despite the fact that Rouhani had an unrivaled experience in diplomacy and security affairs, alongside his extensive experience in the parliament and his standing as a senior cleric.

Now that Rouhani is starting his second term, and Rafsanjani has died, Rouhani seems ready to start a new chapter that could differ from the previous one, given the achievements, failures and changes that took place in his first term, including reaching a nuclear deal with world powers and the emergence of US President Donald Trump, who has expressed his dismay over the deal.

This time, Rouhani seems to be very capable of absorbing differences under the umbrella of the Islamic Republic’s establishment, and some of what he said during the election campaign that stirred controversy he did not mention in his Aug. 3 speech at the supreme leader’s residence or on Aug. 5 in the parliament, were he was sworn in as president for his second term.

In the grand plenary chamber of the Iranian parliament, dignitaries from all over the world watched Rouhani take the oath. Representatives of Hamas, Hezbollah and the Islamic Jihad sat with delegations from the European Union, the United Kingdom, France and other Western states. Gulf state representation from Qatar, Kuwait and Oman boosted the Iranian goal of the gathering, which clearly showed that the Islamic Republic — despite all the attempts by rival states — is neither isolated nor on bad terms with most of the world. The Iranian show of diplomatic power saw around 10 heads of state and a similar number of foreign ministers, with a special appearance from EU foreign policy chief Federica Mogherini, who seemed to be the special guest. On Aug. 5, Mogherini met with Rouhani, Foreign Minister Mohammad Javad Zarif, the supreme leader’s foreign policy adviser Ali Akbar Velayati and Kamal Kharrazi, the head of Iran’s Strategic Council on Foreign Relations; upon her arrival in the parliament the media and even Iranian officials took pictures of her.

Rouhani’s speech in the parliament was in effect the second part of his speech two days before at the supreme leader’s residence, where the endorsement ceremony was conducted. Given its content and the words the president used, it is fair to say the inauguration speech was carefully crafted, very moderate and did not intimidate his rivals nor gave high expectations to his allies. Rouhani walked between mines, offered a hand for peace and raised other issues including a strong response to any violation of the nuclear deal.

“On behalf of the Iranian people and authorities, I explicitly announce that the Islamic Republic of Iran will not start violating the JCPOA [Joint Comprehensive Plan of Action] but will not remain quiet against the United States' continuing to wriggle out of its commitments,” said Rouhani, who addressed Trump without naming him. “We have no business with novice politicians, but we announce to those more experienced that the process of the JCPOA can be used as a model for relations and international law.”

Rouhani explained that his government is a peace-seeking administration in domestic and foreign affairs and prefers peace over war and reform over the status quo. He said, “We stretch a hand of friendship to our neighboring countries.”

While three of the six Gulf Cooperation Council [GCC] countries were present at the ceremony — the aforementioned Kuwait, Oman and Qatar — the remaining three GCC members — mainly Saudi Arabia — were nonetheless indirectly present in Rouhani’s speech. When Rouhani noted that “foreign powers intensify instability and chaos in the region by selling billions of dollars of weapons,” he implied that there are no real problems among the region’s states and all that is happening is because of foreign hands. It was significant that Rouhani preserved a moderate rhetoric in tackling regional issues; even when he spoke of Syria and Yemen, he clearly indicated that the war on terror should continue, yet the best tool to combat terrorism is democratic governance — a message that could have several meanings. He also stressed that intra-Syrian dialogue and similarly dialogue between the parties in Yemen are the only way out of those crises.

Rouhani’s mentioning of the armed forces and support of defensive capabilities for the second time in just a few days could be read as an attempt by the president to cool down his row with the Islamic Revolutionary Guard Corps (IRGC), and might be the result of the July 24 meeting that brought together IRGC commander Gen. Mohammad Ali Jafari, Quds Force commander Maj. Gen. Qasem Soleimani, and others at the president’s office. Rouhani was accused during his election campaign of aiming at the powerful revolutionary forces on various occasions, which sparked several rows, including one over who ordered the launching of a missile attack on the Islamic State in Deir ez-Zor in Syria.

Rouhani’s second term is his chance to officially inherit the political legacy of his late mentor Rafsanjani and be seen as even more of a main player whose voice is heard. To accomplish this, he will have to master the equilibrium game and gain more confidence from other leaders without giving up his red lines. In addition, he must reinvigorate the diplomatic skills that made him the country’s top negotiator while letting go of issues that might stir unnecessary confrontations that could block his ultimate goals. It seems Rouhani is doing well on this for now.