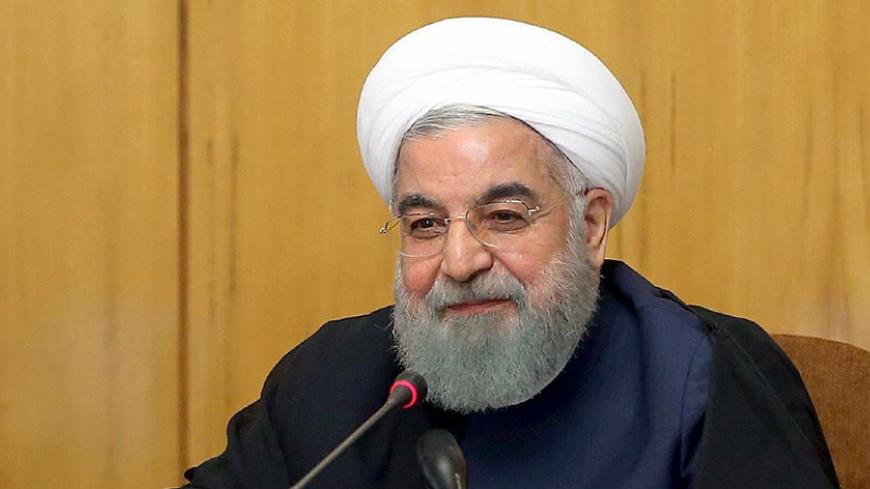 TEHRAN, Iran — At the Imam Khomeini Hussainiya prayer hall, the residence of Iran’s supreme leader, an orchestra played the Iranian national anthem. Almost every senior official in the Islamic Republic was present to witness Supreme Leader Ayatollah Ali Khamenei endorse the results of the May 19 presidential elections and inaugurate the second term of President Hassan Rouhani. As the music faded, a recitation of verses from the Quran began, with Khamenei, Rouhani and the officials listening carefully. The late President Akbar Hashemi Rafsanjani was missed. It was the first time in three decades that he was not present at such a ceremony.

Rouhani is obviously not the same president-elect as he was in 2013. He now appears to be ready to draw his own road map in front of both friends and foes — including Khamenei. All of Rouhani’s men were at the ceremony, as were his rivals, from his predecessor, Mahmoud Ahmadinejad, to his most recent conservative presidential competitor, Ebrahim Raisi. They watched on as the president and the supreme leader appeared to have their best encounter in months. Indeed, it might have been the first time that Khamenei had met or mentioned Rouhani without criticizing him, perhaps an indication that Rouhani's second term might be the beginning of a new chapter. Yet, Khamenei notably called on officials to respect the revolutionary forces, because they are the ones who are going to defend the country if there is an attack.

At the conclusion of the Quranic verses, Interior Minister Abdolreza Rahmani Fazli presented a report on the elections, and the supreme leader's chief of staff, Mohammad Mohammadi Golpayegani, recited the endorsement decree, which read, “With the guidance and blessings of God, in the shade of the Great Imam of the Ages’ [the Mahdi] (may our souls be sacrificed for his sake) attention and benevolence; and by following the people of Iran's lead, I hereby endorse their votes, appointing honorable scholar, Hujjatul-Islam Dr. Hassan Rouhani, as the President of the Islamic Republic of Iran.”

As Golpayegani finished reading the decree, Khamenei handed Rouhani the document, congratulating him and kissing his cheeks. Rouhani in turn kissed the supreme leader’s shoulder, a Muslim tradition that implies respect and affection. On the wall behind both men, a saying by the first Shiite imam, Ali, read, “The people’s need of you is a blessing from God, thus regard them as valuable.”

Rouhani gave a speech in which it was clear that he sought to send multiple messages in different directions. He started with a religious sermon, to touch the hearts of the believers, going deep into the history of how Iran adopted Islam and how Iranians learned politics from the eighth Shiite imam, Reza, whose birthday coincided with the event. Rouhani then went to the core of his speech, speaking about various rights — the right to access information, the right of equality before the law, the right to be respected and the right to have different points of view.

“Freedom, independence, democracy, security and social justice are among the great achievements of the Islamic Revolution,” the Iranian president said. “The other advantage of religious democracy is that we have all accepted that we have different political, economic and cultural opinions in our society of 80 million, and we have accepted that ultimately it is the people’s votes that choose their desired path.”

Rouhani defended his administration’s adoption of the nuclear deal and its openness to the world. “Leaving the hardest sanctions behind with a combination of diplomatic power and defense power has been the first step in such a path,” he said. “Although the Islamic Republic of Iran has paid the price for the country’s independence and will continue to do so, it will never accept any isolation imposed by its enemies.” He concluded by offering to cooperate with everyone at home, including his rivals.

The speech did not appear to come as a surprise to the supreme leader, who chose a motivational speech to start the new chapter. In his remarks, Khamenei stressed the importance of opening up to the world, but without bowing before rivals.

“Despite the fact that the enemies sought to isolate the Iranian nation, the Iranian nation has not been isolated and cooperates with the world, while, at the same time, it seriously confronts the hegemonic powers,” Khamenei said. “Four decades of experience in international relations reveals that the cost of surrendering to aggressive powers is far greater than the cost of standing up to them.” The supreme leader then gave Rouhani's new government some words of advice in this vein.

“I recommend three major orientations: first, addressing the problems of the people; this is the first thing you must do to reach an acceptable point over the next four years.” Khamenei’s second “recommendation” emphasized interacting with the world. “We can have a broad relationship with the world by helping other nations and governments, benefiting from their help as well,” he said. Third, he noted the need to “confront any hegemonic power strongly and firmly — whatever government that might involve. Today, the most appalling and aggressive is the regime of the United States.”

Rouhani is now officially Iran’s president for another term, pursuant to Khamenei’s endorsement decree. On Aug. 5, he will appear before an open session of the parliament to take the presidential oath in a swearing-in ceremony expected to be attended by tens of international delegations, including several heads of states as well as European Union foreign policy chief Federica Mogherini.