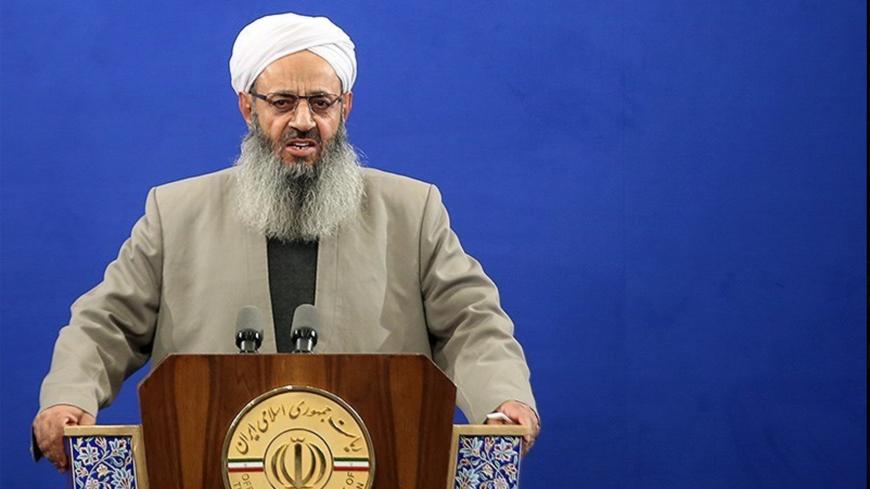 AbdolHamid Ismail Zahi, better known as Molavi AbdolHamid, the Friday prayer leader in Zahedan and perhaps Iran’s most prominent Sunni leader, thanked Supreme Leader Ayatollah Ali Khamenei on Sept. 6 for publicly addressing Zahi's open letter regarding concerns about discrimination. AbdolHamid called Khamenei’s response “a historic, wise and final command.” He said Khamenei’s command was a “religious and legal duty” for all of the officials to implement “justice and equality” between all the races and religions in Iran.

AbdolHamid has written a number of public letters addressed to Khamenei in recent years. His latest letter, which received a response by Khamenei, was written Aug. 2. The letter addressed the issue of discrimination and hiring of individuals across the country. In Iran, while many Sunnis are elected in local city council elections in Sunni majority cities, all provincial appointments come through the central government in Tehran. The second issue addressed in the letter by AbdolHamid was mosques in major cities in Iran, such as Tehran. While Sunnis have mosques in Tehran, the mosques — some refer to them as simply houses of worship rather than mosques — do not compare in size or stature to the mosques in Sunni majority areas in the border provinces.

What made the Aug. 2 letter by AbdolHamid noteworthy is that Khamenei gave a public response to it. In a letter published online by Ayatollah Mohammad Mohammadi Golpayegani, the head of Khamenei’s office, Khamenei responded that “based on religious knowledge and the constitution, no kind of discrimination or inequality by the institutions of the Islamic Republic is allowed based on race, ethnicity or religion.”

A number of Iranian websites published the contents of Khamenei’s response with headlines expressing approval of Khamenei’s position opposing discrimination against religious minorities. Iranian parliamentarian Mahmoud Sadeghi tweeted, “Promising response from the leader of the revolution [Khamenei] to Molavi AbdolHamid’s letter regarding discrimination between races and religions.”

While AbdolHamid appreciated Khamenei’s response, it will be up to the administration of President Hassan Rouhani to ensure that provincial political appointments are more inclusive. AbdolHamid last met with Rouhani in December. AbdolHamid has been critical of Rouhani’s administration but has continued to support him.

Before the May presidential election, AbdolHamid and other Sunni leaders met with government officials, and he said the leaders would support Rouhani’s re-election “despite the presence of complaints.” He said that the environment under Rouhani’s administration is “slightly more free” when compared with Mahmoud Ahmadinejad’s administration. AbdolHamid spoke at the Interior Ministry in front of Rouhani’s campaign staff after Rouhani’s re-election. During that speech, AbdolHamid both praised Rouhani and offered criticisms. However, AbdolHamid was absent from Rouhani’s August inauguration, leaving many to question why.

AbdolHamid met with Iranian Foreign Minister Mohammad Javad Zarif on Sept. 3. While many news websites shared pictures of the meeting, it is not clear what the topic of the conversation was. AbdolHamid last met with Khamenei in January 2015 for “Unity Week.”