Is Khamenei Preparing Iran For a Nuclear Concession?

Despite his defiant rhetoric, Iran's Supreme Leader may be looking for a way out of the nation's isolation, writes Fatemah Aman. As sanctions take their toll and Iran's Syrian ally weakens, Khamenei’s website has begun stressing the importance of flexibility in dealing with the enemy. But does he have the charisma to silence the hardliners? 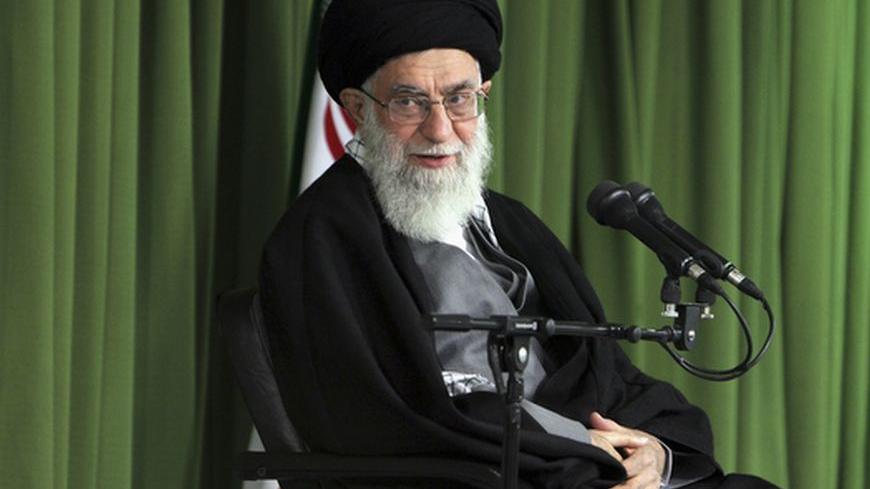 Despite his frequent harsh and defiant rhetoric, Iranian Supreme Leader Ayatollah Ali Khamenei may be looking for a way out of Iran’s growing isolation — and finding a precedent for doing so in the history of Shi’ite Islam.

Recently, the Supreme Leader’s website has been stressing the importance of flexibility in dealing with the enemy in order to serve the greater good. Using the occasion of Imam Hassan's birthday on August 4, the website devoted a big chunk of its content to a peace forged by Imam Hassan, the second Shi’ite imam, with his rival Mo’awia in the early days of the Shi’ite sect.

For Shi’ite hardliners, Hassan is normally slighted and overshadowed by his brother, Imam Hossein, who chose to fight — and face martyrdom — rather than accept peace with the enemy. It is Hossein’s sacrifice at Karbala in the seventh century that is commemorated each year on Ashoura, the holiest day of the Shi’ite religious calendar.

However, there is no shortage of Shi’ite texts that praise Hassan. Khamenei’s rival, former president Ayatollah Akbar Hashemi-Rafsanjani, complained last year about “discrimination” against Hassan. Rafsanjani, speaking to a group of clerics in the theological center of Qom, criticized the “wrong understanding” of those who “discriminate against Imam Hassan over Imam Hossein” and those who claim certain imams were naïve in dealing with the deceptions of their enemies. Rafsanjani also equated the value of Imam Hassan’s peace with that of Imam Hossein’s later uprising against oppression.

Thus it was striking that this year, on August 5, Khamenei’s website re-posted an 1989 speech, in which he defended Imam Hassan’s peace, which, according to Khamenei, “paved the way for Islam to become stronger and more powerful.” In the speech, Khamenei described Imam Hassan’s accord “as valuable as his brother’s martyrdom. As much as his [Hossein’s] martyrdom served Islam, his brother’s peace did as well.”

Khamenei has also been dipping back into more recent history, namely the decision by his predecessor, Ayatollah Ruhollah Khomenei, to accept UN Security Council resolution 598, which ended the 1980-88 Iran-Iraq war. On July 18, Khamenei’s website re-posted several old speeches on the anniversary of that decision. “Acceptance of UN resolution [598] was not out of fear, but rather the realization that with the enormous economic problems facing the nation as presented to him by the officials, the country could no longer afford the war,” Khamenei said on June 3, 1996.

Many Iranians both inside and outside the country have suggested that Iran is facing a situation similar to what it had to contend with in 1988. The sanctions imposed because of Iran’s refusal to suspend the controversial part of its nuclear program have combined with concern over the increasingly likely demise of Iran’s ally, the Assad regime in Syria, to deprive Iran of leverage.

To be sure, Iranian officials have continued harsh rhetoric threatening to block the Strait of Hormuz in retaliation for sanctions on Iran’s oil exports. Iran conducts missile tests and insists that it will not abandon Syria, its partner in a so-called axis of resistance against Israel and the West.

The tough talk could be serving several purposes. For one, it gives confidence to the regime’s core supporters that Iran will not give up what it calls its “unalienable rights.” Also, Iran has traditionally used anti-Israel rhetoric to shore up support in the Arab world. Finally, the rhetoric could be meant to keep outsiders guessing about the Supreme Leader’s next move.

Does the Supreme Leader have a contingency plan to prepare the public for a possible deal over Iran’s nuclear program? Khomeini certainly surprised many Iranians when he accepted a cease-fire in the Iran-Iraq war. For Khamenei, however, such a decision would be much more difficult since he lacks the charisma of the father of the revolution. Thus if he is preparing to concede, he needs to do a lot to prepare the public in order to save face.

A big question for Khamenei is whether he has the stamina and charisma to silence the hardliners. In fact, certain hardliners have already raised concerns that implicitly refer to “ill” advice being given to Khamenei regarding yielding to Western demands. On July 14, Ali Saeedi, the Supreme Leader's representative in the Revolutionary Guard, warned that the country is in a Siffin-like state, referring to a battle between first Shi’ite imam Ali and Muawiyah ibn Abu Sufyan in 657. Some Shi’ites believe that Ali’s army was winning but that the imam sought a peace deal because of poor advice from weak-willed friends.

At this point, it is not clear whether a decision to compromise with the West would alienate some of Khamenei’s closest allies to the point that they would openly express dissatisfaction. Such a decision could, however, gain support among more moderate elements and the Iranian public at large.

As the threat of war becomes more real, voices blaming President Mahmoud Ahmadinejad for the current situation have become louder. In a recent editorial entitled “Was Ahmadinejad Worth This [High] Price?,” the Baztab website, which is close to former Revolutionary Guard commander Mohsen Rezaei, criticized what it called Ahmadinejad’s aggressive diplomacy and mismanagement. The editorial asserted that never during the tenure of Ahmadinejad’s last two predecessors has the Islamic Republic paid as much as it has in the past few years.

Many analysts are trying to predict what Khamenei will do. His recent efforts to consolidate power may be part of his strategy to prepare the country for compromise. If he is planning for the long term, he would seek to prevent a war even at the cost of being blamed for a temporary defeat. The choice, in his view, may come down to accepting blame or risking the existence of the Islamic regime.

Fatemah Aman is an independent media and political analyst.