Is Ahmadinejad Scapegoat For Iran’s Economy?

Iran’s Supreme Leader is blaming the president for the country's deepening political and economic crisis, writes Mehdi Khalaji. Hoping to avoid accountability for the regime’s failed policies, Khamenei’s sole use for Ahmadinejad is as a fall guy. The next president will assume much less authority, predicts the author. 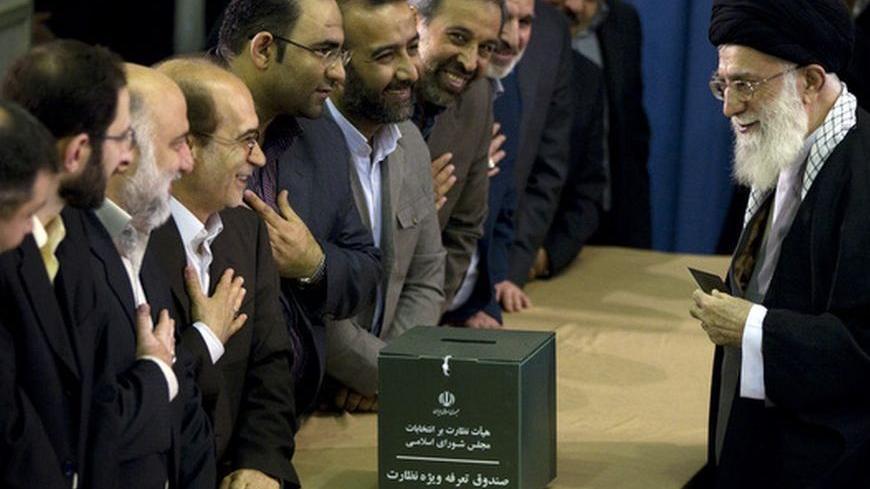 Iran’s Supreme Leader, Ayatollah Ali Khamenei, was responsible for bringing Mahmoud Ahmadinejad to the presidency in 2005 and paid a hefty price for keeping him in that job in 2009. These days, however, the Supreme Leader has chosen to make the president a scapegoat for Iran’s deepening political and economic crisis.

While Khamenei is the ultimate decision-maker in the Islamic Republic, he hopes to avoid accountability for the regime’s failed policies. In the wake of the protests that followed the disputed 2009 vote, the Supreme Leader stood firmly behind Ahmadinejad, primarily to ensure the marginalization of reformists and long-standing icons such as former president Akbar Hashemi Rafsanjani. Now that the power and influence of the first generation of revolutionary leaders has waned, Khamenei’s sole use for Ahmadinejad is to pin the entirety of social and economic woes on him.

The judiciary — headed by a rival of the president, Sadegh Larijani — has accused the Ahmadinejad administration of the most severe corruption since the 1979 revolution. The legislature — headed by Larijani’s brother Ali, another rival of the president — also blames Ahmadinejad for economic mismanagement, which has resulted in rising inflation and unemployment and an unprecedented collapse of the Iranian currency, the rial.

Ahmadinejad now finds himself lambasted on all sides. During a news conference Tuesday, Oct. 2, he counterattacked not only the parliament but the Iranian Revolutionary Guard Corps (IRGC), state-run media and the judiciary for mounting a psychological offensive aiming to sabotage his efforts to solve the economic crisis. All these entities are under the direct supervision of Khamenei.

Although all foreign and defense policies are determined by the Supreme Leader, members of Khamenei’s inner circle allege that Ahmadinejad’s nuclear policies are the cause of UN, US and European Union sanctions that have harshly impacted Iranian oil exports and banks.

An article published Wednesday, Oct. 3, by the Baztab website — a media outlet with ties to Mohsen Rezai, the former commander the IRGC — accused Ahmadinejad of intervening in nuclear negotiations by replacing then-chief negotiator Ali Larijani with Saeed Jalili. Baztab claimed that Larijani had reached a consensus draft in 2008 with Javier Solana, then the-chief foreign-affairs official of the EU, which was approved by Khamenei. However, Ahmadinejad publicly refuted the draft and removed Larijani from his post.

The article appeared intended to create a pretext to absolve Khamenei of the consequences of the country’s nuclear policies. During Ahmadinejad’s recent visit to New York to attend the UN General Assembly, he reportedly offered several suggestions regarding nuclear negotiations, evoking a sharp and critical response from Hossein Shariatmadari, the editor-in-chief of Keyhan — a hard-line newspaper widely recognized as Khamenei’s mouthpiece. Shariatmadari chastised the president for subverting the polices of the Supreme Leader. “I wish the president would take this fact into consideration, and [that he] had not acted outside his legal authority,” the editor wrote. He then quoted Khamenei, citing reasons why Iran should refrain from engaging in negotiations with the United States.

In his press conference, Ahmadinejad said that state television and other media criticize him and his cabinet, while awarding the judiciary and parliament a free pass, because “I am the only person who is accountable before the people.” On Wednesday, several members of parliament accused the president of arrogance and irresponsibility.

It is clear that the greatest domestic power struggle now is limited to Ahmadinejad and his supporters versus conservatives who rely on Khamenei’s support and protection. The final nine months of Ahmadinejad’s presidency will place increasing pressure on him. He is likely to become the victim not only of his own mismanagement and mistakes, but also of his efforts to assert power independent from Khamenei and the IRGC.

It goes without saying that without support from the Revolutionary Guard, Ahmadinejad would not have won the last two presidential elections, but the president now publicly ridicules them and labels them “smuggler brothers” without any apparent concern about upsetting his former backers.

Those who voted for Ahmadinejad, mostly lower-class villagers and workers, now suffer greatly due to his policies, and his political power base has significantly diminished. Thus, Khamenei has no difficulty using the legislature, judiciary and state propaganda to attack the president for any problems within Iranian society, regardless of whether they are due to Ahmadinejad’s policies. The intention is to blunt mass dissatisfaction concerning the economy, which might potentially lead to widespread popular unrest.

Ahmadinejad’s experience proved to be a good lesson for Khamenei not to let anyone use elections and presidential positioning to establish independent authority. This lesson has been absorbed by Ahmadinejad’s potential successors, who include parliament speaker Ali Larijani, former foreign minister and adviser to the leader Ali Akbar Velayati, and Tehran mayor Mohammad Baqer Qalibaf. Khamenei cannot be challenged; opposing the man who placed you in power will lead him to swiftly removing you or diminishing that power.

As the conflict between Ahmadinejad and his critics worsens, Khamenei continues to control the ambitions of presidential hopefuls. The next president should show a considerable amount of humility and be prepared to assume much less authority. Ahmadinejad’s successor will likely be selected from those who keep a low profile with regard to domestic politics.

Khamenei also needs to make Ahmadinejad a scapegoat if he wishes to initiate a new round of nuclear negotiations following the US presidential elections. The leader can then portray himself as much wiser than Ahmadinejad in order to reassure the West about his rationality and willingness to reach a deal. This would make it much easier for him to justify compromising over the nuclear dispute to the Iranian people as well.

Mehdi Khalaji is a senior fellow at the Washington Institute for Near East Policy.