Former President Mahmoud Ahmadinejad has rejected the idea of re-entering politics and said that he would remain silent on current issues. 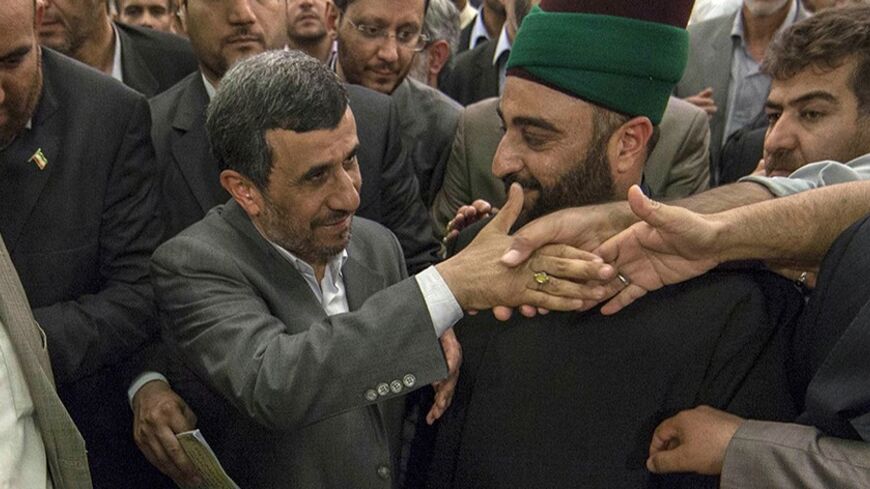 After media speculation about a possible return to politics, former President Mahmoud Ahmadinejad has rejected the idea for now.

“I do not intend to enter politics,” Ahmadinejad said among a crowd of supporters in Mashhad last week. “I will not break my current silence,” he said, but added, “This silence does not mean passivity.”

Ahmadinejad, who has become more visible lately, answered some reporters’ questions and shared his ideas on governance, saying, “All of the world’s problems are because the work is not done for God. This is why corruption has happened, and happens.” Accusations against the former administration of wide-scale fraud and corruption have increased since Ahmadinejad left office.

The former president also praised Iran’s revolution for relying on “domestic capacities” and said that Iran’s “Islamic system will provide the setting for the Hidden Imam’s world revolution,” referring to Shiite Islam's twelfth and final leader. He added that the “prime goal” of the Islamic Republic of Iran was to start a movement for the “beginnings of the emergence of the Hidden Imam.”

Ahmadinejad is currently a member of the Expediency Council. But high-profile appearances and statements by former officials have fueled rumors that he is preparing for a larger return to politics.

Ahmadinejad’s former spokesperson, Gholam-Hossein Elham, has recently become active in the media in defense of the former administration’s policies. He criticized the nuclear agreement between Iran and the UN Security Council. He accused President Hassan Rouhani’s administration of “shutting down” all of Iran’s nuclear achievements.

Elham also praised Ahmadinejad’s administration for continuing the “neither dominant nor be dominated” relationship with respect to America that was favored by former Supreme Leader Ayatollah Ruhollah Khomeini. He said Rouhani’s outreach to the United States has resulted in “unreasonable” behavior by the latter.

Elham has also announced the formation of a center for Ahmadinejad supporters, called Hamaa, which will create websites for social media users who support the former president.

Ahmadinejad’s visit to the increasing politicized former battlegrounds of the Iran-Iraq war in Khuzestan province also received much media attention. Government-funded programs that take students to these former battlegrounds have received Supreme Leader Ayatollah Ali Khamenei’s unequivocal support. Critics say there have been too many fatalities on the roads to these sites in southwest Iran near the Iran-Iraq border and that rather than being strictly educational, they are used for indoctrination.

After Rouhani reportedly turned down an offer to visit these sites, not only was Ahmadinejad’s visit meaningful, but his comments once there were controversial. “We will sit easy once the flags of our martyrs are raised over the White House,” Ahmadinejad said, according Basij News Agency.

Pictures of Ahmadinejad sitting two seats away from Ayatollah Khamenei at a religious ceremony also added to the rumors of his political return. Ahmadinejad and Khamenei had a very public falling-out in 2011. Some wondered if the seating arrangement and the picture, which was featured on Khamenei’s website, were meant to send a political message.