As rumors spread in the Iranian media about President Hassan Rouhani boycotting Expediency Council meetings, some observers are comparing his avoidance strategy to that of former President Mahmoud Ahmadinejad. 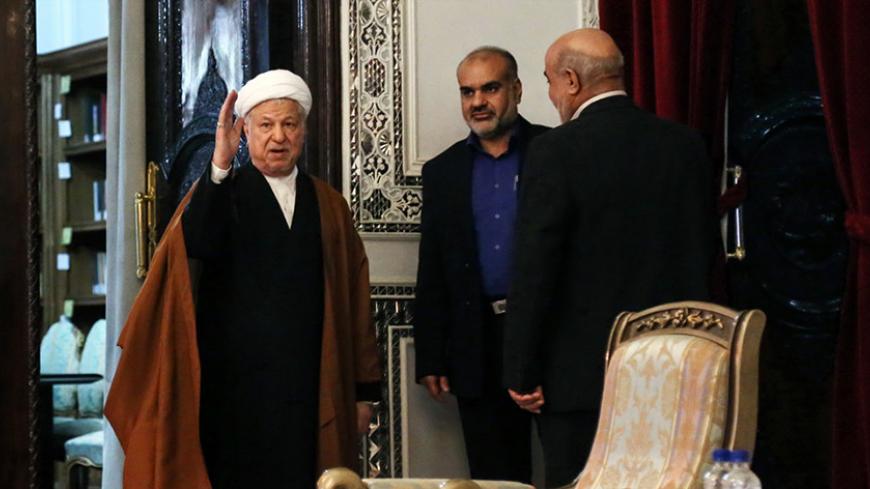 Conservative Iranian media outlets have been buzzing with the news of President Hassan Rouhani’s continued absence from the country’s Expediency Council meetings, which is chaired by his political mentor, Ayatollah Ali Akbar Hashemi Rafsanjani.

According to Fars News, Rouhani clashed with the Expediency Council over the writing of the country’s Sixth Development Plan, a five-year plan meant to address the needs and future goals of the country.

Expediency Council member Mahmoud Mohammadi Araghi told Fars News Nov. 30 that Rouhani had objected to the council’s involvement in writing the specifics of the development plan, arguing that it is the administration’s job. However, the majority of the members of the council did not vote with Rouhani, and Rouhani skipped subsequent meetings.

When asked if the president was intentionally avoiding the meetings, using a Persian term for “sulking,” Mohammadi Araghi said that this was his impression after hearing Rafsanjani's comments about the issue. As president, Rouhani is obligated to attend Expediency Council meetings.

Reports in the Iranian media have not given the exact number of meetings Rouhani has missed. Farda News, which is associated with Tehran Mayor Mohammad Bagher Ghalibaf, was one of the first outlets to report on Rouhani’s absence. According to the Nov. 17 Farda report, Rouhani had not attended a council meeting in two months.

During a Nov. 24 press conference, administration spokesman Mohammad-Bagher Nobakht said that Rouhani’s absence from the council meetings was the result of his busy work schedule.

However, Rouhani’s absence from the Nov. 28 council meeting inspired comparisons to his predecessor, President Mahmoud Ahmadinejad, who boycotted Cabinet meetings for 11 days when he clashed with Supreme Leader Ayatollah Ali Khamenei over his selection for the minister of intelligence position. In addition to avoiding the Cabinet meetings, according to Farda, Ahmadinejad at one point also boycotted the Expediency Council for three years.

Conservative Iranian media outlets have used the opportunity to attack the president, Reformists and their long-time rival, Rafsanjani. Many shared a picture of the Nov. 28 meeting with a conspicuously empty seat next to Rafsanjani.

Yalasarat, the news site for Ansar-e Hezbollah, reported that both Rouhani and Ahmadinejad having problems with Rafsanjani’s leadership of the council shows that the council is really “for the unemployed.” The Expediency Council was originally created to resolve disputes between the Guardian Council and the parliament, but today it serves more as an advisory role for the supreme leader.

According to Yalasarat, Rouhani had boycotted the council meetings previously for three months after differences arose over the governor of the Central Bank.

Reformist media organizations have rejected the attacks on Rouhani and the comparisons to Ahmadinejad. Ghanoun reported that differences between Rouhani and Rafsanjani are “fiction that only has a place in the hopes of extremist movements opposed to the administration.” The Ghanoun article claimed that by using the term for “sulk,” supporters of Ahmadinejad are inappropriately attempting to draw a comparison to the former president for his refusal to show up to work for those 11 days.

The article continued that Rouhani’s silence, inaction by the administration’s media team and the preoccupation of Rouhani’s supporters with the upcoming parliamentary elections have resulted in Rouhani’s political opponents effectively pursuing destructive strategies against the president.