Is Iran's Rouhani about to ditch his longtime patron?

Rumor has is that Iranian President Hassan Rouhani is distancing himself from his longtime patron Ayatollah Ali Akbar Hashemi Rafsanjani. 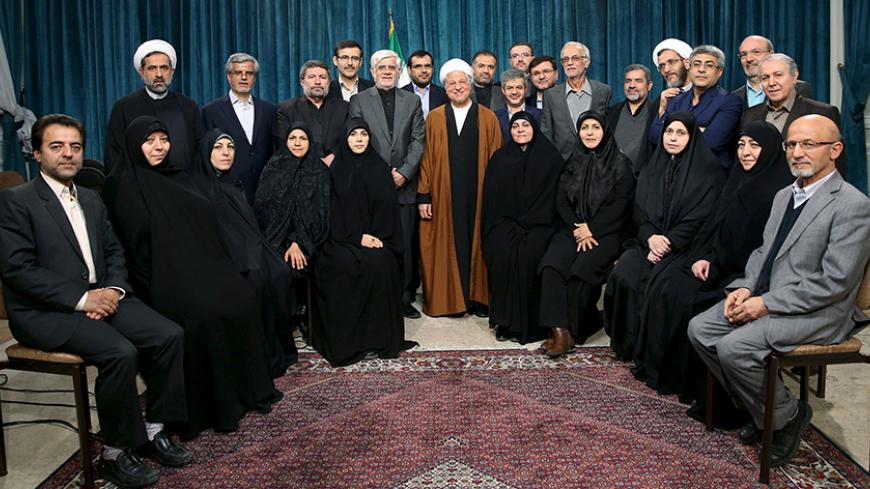 TEHRAN, Iran — Before being elected president of Iran in June 2013, Hassan Rouhani was known as a close friend and constant companion of Expediency Council Chairman Ayatollah Ali Akbar Hashemi Rafsanjani. Rouhani’s management of the initial round of nuclear negotiations with the West — the failed engagement with Britain, France and Germany in 2003-2005 — earned him the nickname “the Diplomat Sheikh.” However, throughout his career, including when he was secretary of the Supreme National Security Council during the presidency of Mohammad Khatami, when he was removed from this post by then-President Mahmoud Ahmadinejad and finally when he started his election campaign in 2013, everyone thought of Rouhani as Rafsanjani’s right-hand man. A review of the political offices that Rouhani has held clearly shows that he has always stood alongside Rafsanjani.

When Rouhani was elected president, a majority of political analysts in Iran noted the importance of Rafsanjani in Iranian politics and the game he had played behind the scenes. Addressing members of the Joint Campaign of the Supporters of the Administration and Reformists on Feb. 19, one week before the Feb. 26 parliamentary and Assembly of Experts elections, Rafsanjani bluntly stated in reference to the June 2013 presidential contest, “One week before the elections, Rouhani had 3% of votes. With my support he shot up to 53%.”

Despite their long history of working together, there are now rumors in Tehran about Rouhani and Rafsanjani having disagreements that are leading them to distance themselves from one another. The Feb. 26 Assembly of Experts elections exposed one of the main aspects of this political fault line.

At the core, the rumored disagreement between Rafsanjani and Rouhani appears to center on how the president wants to present himself as independent. He considers the so-called moderation dialogue to be his own work, and more broadly is seeking to establish a new political movement that brings together moderates from both ends of the political spectrum.

An adviser to Rouhani told Al-Monitor on condition of anonymity, “In recent years, Mr. Rafsanjani has distanced himself from the moderation movement and his extreme positions have, from time to time, created problems for the administration. Mr. Rouhani should act independently. He is unbeatable and has no rivals. He doesn’t need to identify himself with Rafsanjani or Khatami — others need to try to get close to him.”

In a Sept. 10 interview with Etemad Online, Rafsanjani’s eldest daughter, Fatemeh Hashemi Rafsanjani, spoke about the perceived similarities between her father and the president. She said the president “is not in any way similar to Ayatollah Hashemi." She went on, "Some people claim that Mr. Rouhani’s mindset regarding moderation and development is similar to that of Mr. Hashemi. We should remember, however, that there are huge differences between the two as well.”

Fatemeh Hashemi Rafsanjani, who is a senior member of the Moderation and Development Party, added, “During the early days of this administration, my father told Mr. Rouhani that while he is ready to give advice, he will never interfere in the administration’s work. Nonetheless, the two hold both private and public meetings from time to time.”

It is of course possible that the root of the rumored political dispute between Rouhani and Rafsanjani goes back further. In an exclusive report published on Jan. 12, 2014, five months after Rouhani took office, Principlist-affiliated Jam News quoted Rafsanjani as having made critical comments about Rouhani at a private meeting with a group of university students. The report claimed that Rafsanjani had stated, “I am dissatisfied with Rouhani. Whatever I say, he agrees to — but then goes on and does what he wants to do anyway.” The report added that the students had criticized the Rouhani administration’s appointments as well as its disregard for younger potential appointees. Rafsanjani reportedly responded, “Rouhani does not listen to me either. I am also upset about this situation, but for now, we should keep silent in order not to give excuses to the other side.”

Al-Monitor spoke about these rumors with Saeed Laylaz, the deputy of the Executives of Construction Party, which counts among its members a son, a daughter and brother to Rafsanjani. Laylaz told Al-Monitor, “The Principlist movement makes up these stories to make up for its losses. There is no truth in this. [Rouhani and Rafsanjani] might have different views on certain issues, but it is a pure lie to claim that a wedge has been driven between them or that some people are trying to drive such a wedge between Rouhani and the ayatollah.”

Despite these denials, it appears that the conservative faction within the administration may be seeking to work toward separating Rouhani from Rafsanjani. While these conservatives supported Rouhani’s election campaigns, they are not interested in seeing Rafsanjani playing an active role in the administration. They are thus trying to distance Rafsanjani from Rouhani by encouraging the president to act more independently. If their effort succeeds, however, it will only make things difficult for both Rouhani and Rafsanjani and ultimately make things easier for those opposed to the moderation movement.