Trump’s options on the nuclear deal with Iran

Before settling on an Iran policy, President Trump must take a holistic view of the US footprint in the region and move forward based on pragmatism. 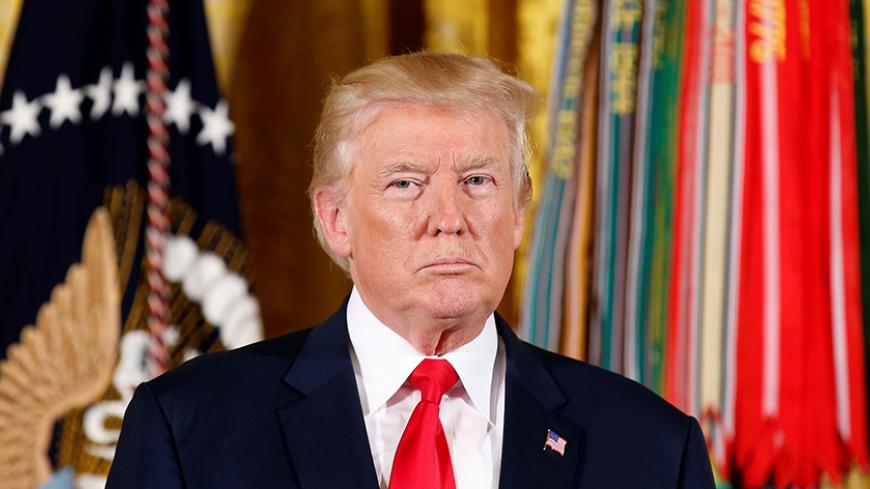 US President Donald Trump seen during a ceremony to award the Medal of Honor to James McCloughan at the White House in Washington, July 31, 2017. - REUTERS/Joshua Roberts

While President Donald Trump’s State Department has twice now certified Iranian compliance with the July 2015 nuclear deal, there are indications that Trump is intent on scuttling his predecessor’s signature foreign policy achievement.

However, the conundrum for the White House and its allies is that withdrawing from the deal — known officially as the Joint Comprehensive Plan of Action, or JCPOA — when Iran is fully complying with its obligations according to all objective observers cannot be done without isolating the United States. “You want the breakup of this deal to be about Iran. You don’t want it to be about the United States, because we want our allies with us,” Sen. Bob Corker, R-Tenn., the Senate’s Foreign Relations Committee chairman and a prominent JCPOA critic, said.

Notably, Trump has already tasked a team in the White House with presenting him with an option to not recertify Iranian compliance at the next review in September, and he has said that he “personally” believes Iran will be found “noncompliant.”

An informed source in Washington who asked to remain anonymous told Al-Monitor that the White House is seeking ways to accuse Iran of technical noncompliance and material breaches of the deal, such as pressuring the International Atomic Energy Agency into demanding access to sensitive military facilities in Iran and using an Iranian rejection as a pretext for withdrawing from the deal; renegotiating the deal to get zero uranium enrichment in Iran or make the current limits on the Iranian nuclear program permanent; and trying to validate a 2016 German intelligence report claiming Iran continued “illegal proliferation-sensitive procurement activities," despite the fact it was already dismissed by the Barack Obama administration and independent experts.

US regional allies led by Saudi Arabia and the United Arab Emirates have begun lobbying Congress for the right to enrich uranium themselves, citing that the JCPOA allows “Shiite Iran” to do so. Corker has also touched on this issue, stating that “we’ve got to ultimately get to a place where we renegotiate this deal and they never have the right to enrich.” Meanwhile, a senior US official who spoke on condition of anonymity confirmed that the Trump administration is pushing for inspections of Iranian military sites.

During the G-20 summit in Hamburg, Trump also called on foreign leaders to stop doing business with Iran, in direct contravention of the nuclear deal’s text prohibiting actions that “adversely” affect Iran establishing normal economic relations. Iranian Foreign Minister Mohammad Javad Zarif described Trump’s comments as a violation of “not the spirit but of the letter” of the JCPOA. He added that Iran has “available” the option to withdraw from the deal in the event of “significant nonperformance” by the United States.

The Trump White House is on the brink of an action that will have major consequences for peace and stability in the Middle East and beyond. However, Trump’s options are not limited.

The root of the Trump administration’s qualms with Iran has to do with US-Iran differences on regional issues. Therefore, the Trump White House must recognize that the JCPOA is a multilateral agreement involving five other global powers that is focused only on the nuclear dispute, and it is an agreement that met each side’s bottom lines — not their maximalist demands.

At a recent joint press conference with Russian Foreign Minister Sergey Lavrov, EU foreign policy chief Federica Mogherini significantly stated, “We will ensure that engagement with Iran will continue and that the deal will be implemented in all its parts by all. This means the nuclear part; this means also all the rest like the lifting of sanctions, as you know, and the gradual re-engagement in all sectors.”

To this end, the most prudent option for the Trump administration would be to uphold America’s credibility and UN Security Council Resolution 2231, which endorses the deal, by remaining committed to the JCPOA and simultaneously seeking to resolve differences with Iran over the region through pragmatic diplomacy.

The source of US contention with Iran has little to do with where the Islamic Republic stands on human rights or terrorism of the flavor that has ravaged Iraq, Afghanistan, Syria and Libya and killed countless innocents in the West. It is well-known that on human rights, Iran is light-years ahead of some of America’s closest regional allies such as Saudi Arabia. Moreover, both Hillary Clinton and Trump lambasted Saudi Arabia as the world’s biggest funder of terrorism. A former Qatari prime minister has also recently admitted how the United States, Qatar, Saudi Arabia and Turkey all made “mistakes” in supporting extremist groups in Syria. The fact is that Iran is the only regional power directly fighting the Islamic State and al-Qaeda, who likely would have captured Baghdad and Damascus if not for Iran’s intervention.

However, a number of realities cannot be denied. First, the United States and Iran have sharply clashing interests in the region. While the United States views Iran’s regional influence as destabilizing, Iran sees America’s decadeslong underwriting of regional autocracies and its wars in Afghanistan, Iraq, Libya and complicity in the Yemeni-Saudi conflict as spurring instability and fostering terrorism. Second, the United States is at odds with other global powers such as Russia, China and even some of its European allies over its Middle East policy. Third, the United States also currently has serious differences with some of its traditional allies among the Arab Persian Gulf states as well as Turkey.

If Trump continues with his policies of all-out confrontation and regime change in Iran, increasing America’s military presence in Afghanistan, supporting Saudi Arabia’s brutal war in Yemen and flooding the region with hundreds of billions of dollars more of US arms, he will only add more fuel to regional fires, which will also sooner or later gravely harm US security. Furthermore, while international diplomacy achieved success in peacefully resolving the Iranian nuclear dispute, its track record on the crises in Syria, Libya, Yemen and Palestine is of failure.

As such, before settling on an Iran policy, Trump must take a holistic view of the US footprint in the region and decide on a comprehensive regional strategy. His administration must take note of past failures, especially in Iraq, Afghanistan and Libya; take to heart their lessons; and make the appropriate reforms to ensure such mistakes never occur again. If this occurs, then when it comes to Iran, Trump will not be fated to repeat the counterproductive polices of the past decades.