Russia's UN ambassador says the United States has "an irrational allergy" to Iran and should stop trying to constrain Tehran's influence in the Middle East by undermining the Joint Comprehensive Plan of Action. 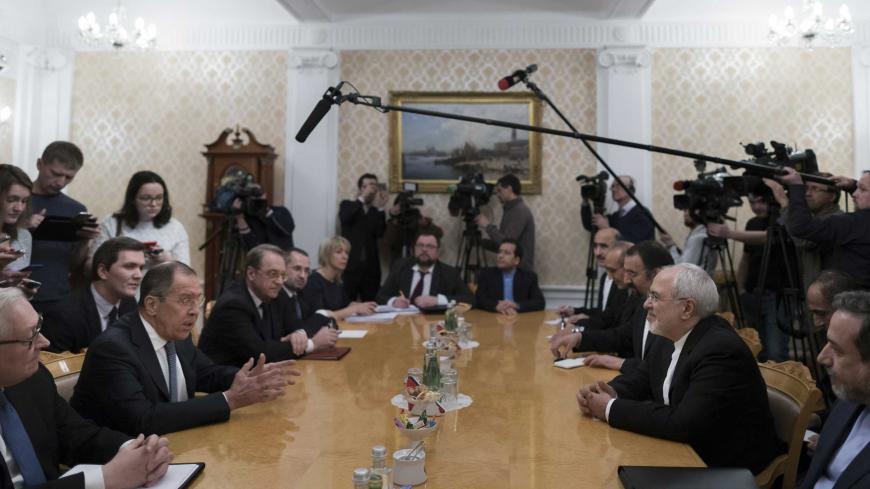 The European Council on Foreign Relations once called Russia and Iran the "power couple" of the Middle East. That was two years ago, and it appears they're still making the relationship work.

On Jan. 10, Russian Foreign Minister Sergey Lavrov held a meeting with his Iranian counterpart, Mohammad Javad Zarif, as part of the latter’s visits to Russia and the European Union to discuss conditions of the Iran nuclear deal (Joint Comprehensive Plan of Action, or JCPOA). These meetings took place right before US President Donald Trump’s deadline Jan. 12 to decide if the United States is going to uphold the 2015 deal. According to a press release from the Russian Foreign Ministry, Moscow and Tehran reaffirmed their adherence to the JCPOA and stated that “attempts to undermine its consistent implementation by Washington will have a negative impact for the regional security and stability, as well as the value of multilateral diplomacy as applicable to the international nonproliferation regime.”

Prior to his Jan. 12 announcement agreeing to continue waiving sanctions against Iran, Trump spoke to French President Emmanuel Macron, to US allies in Israel and Saudi Arabia, and to his national security team. Trump’s previous foreign policy decisions have proved that even when everything and everyone argues against taking a certain radical step, the United States may still go for it. This time, however, Trump did what was expected of him — he recertified the deal but cautioned it would not happen again.

Indeed, despite Trump’s fervor to sink or renegotiate the deal, the recurring decision appears tricky even for him. First, instead of taking responsibility when he refused Oct. 12 to certify that Iran was complying with the deal, he passed the ball to Congress to decide within 60 days whether to amend the Iran Nuclear Agreement Review Act (INARA) of 2015. (INARA requires the president to certify Iran's compliance every 90 days.)

Second, any Trump attempt to completely abandon the JCPOA would face opposition both at home and abroad and damage the country's reputation as a signatory to international treaties. Iran continuously reminded Trump about this credibility risk, which was echoed by the Russian and European parties to the JCPOA. Waiting for the US decision on the sanctions relief — or their extension — had been irritating Tehran since October 2017. The bigger problem, however, was what America’s next step would be if Trump ultimately pulled out of the deal. The issue was discussed at the Moscow Nonproliferation Conference in October, and Zarif also planned to speak to EU members about it.

Russian Deputy Foreign Minister Sergey Ryabkov, who is responsible for Iran-related nuclear negotiations, claimed in mid-October that Moscow was already preparing for the worst-case scenario of the United States withdrawing from the JCPOA. But both Iran and Russia insisted there was no viable alternative to this "non-ideal deal." Trump, Iran and Russia all acknowledge the JCPOA has its flaws, but each preferred to adhere to it for their own reasons.

Trump says the JCPOA fails to address Iran’s missile program and its aggressive activities in the region. But Russian President Vladimir Putin said during his Nov. 1 visit to Tehran that “unilateral withdrawal from the JCPOA under any pretext is not acceptable, and there is no connection between the international agreement and the ballistic and defensive capacities of Iran.”

Moscow certainly doesn’t think America’s problem with Tehran is really Iran's national nuclear energy program, but rather Iran’s influence in the region and concern that sanctions relief might provide Iran with resources to expand. Thus, Russia has even more motivation to stand united with Iran, to prove Moscow's crucial role on the ground and in diplomatic processes in the Middle East, even if it might disagree with Iran on certain issues in Syria. At the meeting with Zarif, Lavrov reiterated that the main authority in this regard — the International Atomic Energy Agency — certified Iran’s full compliance with the JCPOA.

Russia also seeks to remind everyone of the pivotal role it had in resolving the international impasse with the JCPOA in 2015.

Besides their ability to develop close cooperation on Syria, which many analysts called “strategic” despite all odds, Russian and Iranian officials tried to maintain at least the appearance of close cooperation in many other fields. For instance, at the Jan. 10 meeting, the foreign ministers agreed that the Russia-Iran bilateral trade commission would meet early this year.

On another thorny issue beyond the JCPOA, Russia was critical of the United States' call for an emergency meeting of the UN Security Council to get the council to weigh in on the recent uprisings in Iran. Even EU representatives, including France and the United Kingdom, opposed the idea. Russia’s UN ambassador, Vasily Nebenzya, was harsh in his remarks about US Ambassador Nikki Haley’s accusations against Iranian authorities. Nebenzya described the US attitude as “an irrational allergy” to Iran that “precludes sober assessment of the real events.”

During his trips to Moscow and Brussels, Zarif repeated points he made in his recent opinion piece in the New York Times by personally lobbying officials of Russia and the EU3 (Germany, France and Italy). He stressed that it's not enough for the international community to just speak out against “the irresponsible actions of the American administration." Rather, he said, all JCPOA supporters should pressure the United States “to stop its disruptive actions.”

Zarif pointed out that this trip was his 21st to Moscow since he became foreign minister of Iran about four years ago — which, he said, proves the importance and scale of the relationship between Iran and Russia. Yet the “special relationship” with Russia puts the Iranian foreign minister in an uncomfortable position. Zarif was praised elaborately in 2015 for the nuclear deal but nowadays is heavily criticized by the Iranian public basically for the same effort. The JCPOA, implemented in January 2016 with Russia's involvement, hasn't brought any substantial economic relief, which adds to a wave of unfulfilled expectations that culminated in the recent protests in Iran. This irritation now multiplies any suspicion the public holds about Moscow’s potential underlying intentions in interacting with Tehran. Zarif's tweets about the trips received many angry comments in response, including some calling for the minister to answer for “being on Russia’s payroll” or “lackeying before Russia and China,” as well as some others addressing the Iranian public's more historical grievances with Russia.

It's not clear what developments might trigger Trump’s decision on the JCPOA in another 120 days, but Moscow and Tehran — fortified by their need of each other’s support on Syrian issues — will work to keep the deal intact. On Jan. 13, Ryabkov made it clear that Moscow “will counter US attempts to undermine the JCPOA.”