Will Biden, Netanyahu find common ground on Iran in 2023? 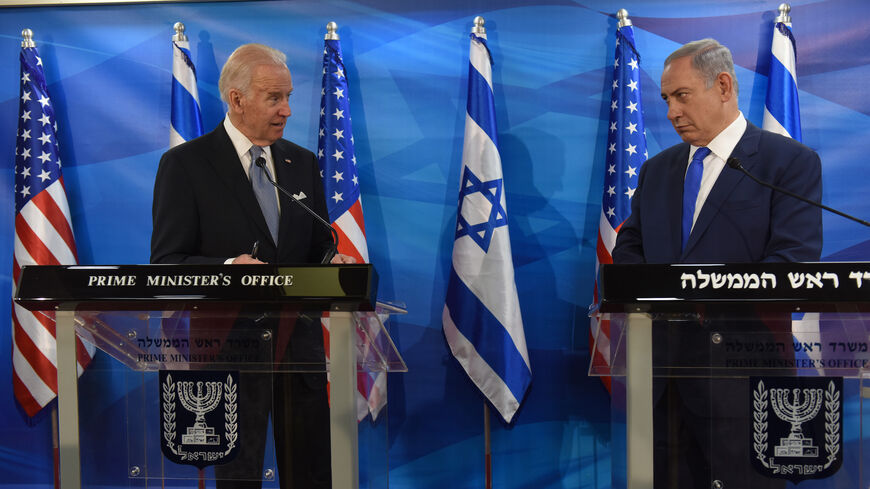 A 'dead' Iran deal is a good deal for Netanyahu

If the Iran nuclear deal, the Joint Comprehensive Plan of Action (JCPOA), is "dead," as US President Joe Biden said in an off-the-cuff remark last month, Israeli Prime Minister Benjamin Netanyahu stands to cash in.

Among Netanyahu’s immediate priorities is addressing concerns in Washington and the region about Israel’s new far-right government. US national security adviser Jake Sullivan will travel to Israel in the coming weeks to get ahead of possible friction with Washington over the new government’s approach to the Palestinians, settlement expansion and the rights of both Israel’s Arab and LGBTQ communities, Axios reports today. A Netanyahu visit to Washington is expected in early 2023.

Iran, however, is not one of those points of friction, and is not likely to be as long as the United States doesn’t press for a compromise deal on Iran’s nuclear program and Netanyahu doesn’t push too hard for military action to block Iran from acquiring nuclear weapons.

Netanyahu, a staunch critic of the nuclear deal, has been gifted a windfall on Iran, at least for now. The Biden administration’s official line is that the JCPOA is no longer on the agenda, replaced by "multiple rounds of sanctions" targeting Iranian officials responsible for the brutal crackdown on those protesting the death of Mahsa Amini, who died in police custody in September for a hijab violation.

Biden’s backup plan — continuing sanctions and pressure on Iran, for both its human rights violations and coordination with Russia in the war in Ukraine — sounds a lot like Donald Trump’s "maximum pressure" campaign, which is fine with Netanyahu.

Increased US-Iran tensions present other opportunities for Netanyahu as well. Look for him to encourage Biden to buck up a regional deterrent posture toward Iran, in the process bringing Israel and Saudi Arabia closer together, Ben Caspit writes. Jared Szuba tells us that military officials at US Central Command have been advocating for an informal regional defense coalition against Iran.

For Biden, the once appealing idea of resurrecting the JCPOA may have rapidly diminishing political returns, whatever its national security merits (more on this below). The deal was the signature foreign policy achievement of President Barack Obama — not Biden. Biden has backed a return to the JCPOA since taking office, but it rarely makes his priorities or talking points. Americans aren’t clamoring for an Iran deal, especially given Iran’s crackdown on protesters and support for Russia. A Republican-led House of Representatives would savage a deal, which would have zero bipartisan support and a likely sizable number of Democratic defections if it ever comes to a vote.

Netanyahu has many friends on the Hill, especially Republicans, and will work his 40-year friendship with Biden to keep the JCPOA off the agenda. Don’t sell this relationship short. Both men are seasoned politicians who pride themselves on the personal touch in diplomacy. During his visit to Israel in July this year, Biden greeted Netanyahu, who was among the Israeli officials in the welcoming delegation at the airport, with an especially enthusiastic handshake and the words "You know that I love you."

For Bibi, it didn’t get better than Trump for US-Israel relations. But Netanyahu’s relationship with Biden could end up a close second. Biden didn’t know Netanyahu’s predecessors, Naftali Bennett and Yair Lapid, so there was no personal chemistry with either. Netanyahu went to the mattresses against the JCPOA back in 2015, souring an already strained relationship with Obama. The acrimony between them mostly washed over Biden. There will be points of friction with Washington in the coming year. But Biden and Netanyahu may find their common ground in a decades-long friendship and a shared concern about Iran.

Borrell says no alternative to JCPOA

The intent of the JCPOA was to enforce constraints and intrusive inspections on Iran’s nuclear programs to prevent the development of a bomb in return for sanctions relief and the unfreezing of Iranian assets.

High Representative of the EU for Foreign Affairs and Security Policy Josep Borrell wrote on Dec. 23 that with regard to nuclear non-proliferation, there is no alternative to the JCPOA, adding, “Those who think otherwise simply fool themselves.”

The EU has a two-track policy toward Iran — on the one hand, sanctions and pressure regarding the protests and Russia, and on the other, diplomacy on the JCPOA. Borrell and Iran Foreign Minister Hossein Amir Abdollahian met at the Baghdad II Summit in Amman on Dec. 20 to attempt a reset on the stalled nuclear talks.

Iranian officials continue to suggest they want to conclude an agreement, but they have dragged out the talks for months, adding on demands beyond the scope of the JCPOA. One would think Tehran might want to take the deal on the table, which is the US-EU offer, if for no other reason than to test the Biden administration and US-EU unity at a time when the West is focused on the street protests rocking Iran. If there is no nuclear deal and no sanctions relief for the Iranian people, the fault lies in Tehran.

Can Iran change the conversation in 2023?

Looking ahead to 2023, there are consequences from the absence of a nuclear deal and Iran’s sense of siege from the protests, which it blames on foreign enemies.

First, Iran may proceed with further enrichment toward a nuclear weapon, potentially spurring a nuclear or ballistic missile arms race in the region. Iran is already enriching uranium to 60%, which is one technical step away from 90%, the weapons-grade enrichment level.

Such an advancement could compel Israel to consider a military strike, which would have its own consequences for regional stability, given Iran’s proxies and networks in the Gulf, Lebanon, Yemen, Iraq, the West Bank, Gaza and elsewhere.

Second, Iran under sanctions and siege would likely have even less incentive to support the UN peace process in Yemen or advance Iran-Saudi talks, which until now have been brokered by former Iraq Prime Minister Mustafa al-Kadhimi. Iran blames the kingdom for backing the protests through Iran International, a Saudi-backed media outlet.

Third, increasingly under pressure by the West, Iran is unlikely to back off in its support of Russia in the war in Ukraine.

Fourth, in Iraq, where Iran’s allies and proxies spearhead the ruling coalition, an escalation in US-Iran hostilities could turn Iraq back into a battlefield. Iran holds Iraq ransom to the export of Iranian gas for Iraq’s electricity grid. Iraq’s steps toward regional integration, especially with the Gulf, are likely in jeopardy: Don’t expect the Iraq-GCC electricity project signed earlier this year to move ahead with any speed.

Fifth, despite the blizzard of sanctions and the bravery and resilience of the protesters, the Iranian government is unlikely to loosen the siege. “Regime change is a high bar,” we wrote earlier this month, and “fragile autocratic states under extended siege rarely loosen their grip, or end with a democratic turnaround. There are numerous cases, none directly comparable, except as an analytical caution: Iraq, Syria, Afghanistan, Libya, Egypt, etc.”

The worst of all worlds — an increasingly repressive Iranian government, with no constraints on its nuclear program, inching toward weapons breakout or sneak out — could be a probable if not likely scenario for 2023.