Could the United States and Russia learn from the Dayton Agreement to reach a lasting peace deal in Syria? 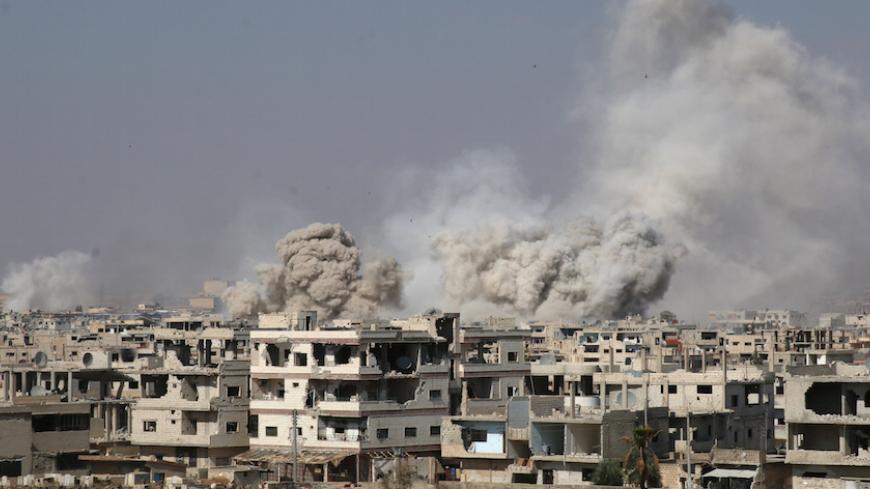 As Russia and the United States are holding back-channel talks over de-escalation zones in southern Syria, there’s a larger question of whether the two countries might broker an ultimate peace deal for the Syrian civil war.

Officially, Moscow is relying on the de-escalation zones to be in effect for an indefinite term and considers them instrumental to settling the conflict. However, agreements on the “soft decentralization” of Syria reached in Astana, Kazakhstan, tend to prompt questions rather than give answers.

It’s not clear yet how those violating the cease-fire will be punished or who will become the peacekeepers in these so-called security zones. Not many in the opposition even understand the term “de-escalation zone,” which does not exclude military operations. Moreover, according to Al-Monitor sources in the Free Syrian Army (FSA), the militants fear that the agreement will play into the hands of the regime, which aims to divide and “domesticate” the opposition, according to the FSA sources. Toward that end, the opposition fears it is to be sent to fight the radical Hayyat Tahrir al-Sham (HTS) and the Islamic State (IS).

The cease-fire agreement is likely to be violated. Nevertheless, if Moscow is set on keeping it, the prospect of a political settlement will become much more realistic, especially after IS is cleared out of eastern Syria. Still, the cease-fire is just one step on the long road toward ending the civil war and isn’t considered a breakthrough.

It’s obvious that, despite its seeming adherence to United Nations Resolution 2254, the Syrian regime and Iranians will hamper any significant reforms that could reduce their influence. Here, Moscow will have to solve a very complicated problem: how to make its allies compromise without giving up on Syrian President Bashar al-Assad — at least not right away. In view of the Russian presidential elections scheduled for March, even the Russian public would perceive Assad’s ouster as a Kremlin failure.

However, as they say, where there is a will, there is a way. There’s a view among those Russian experts who take an unbiased look at the Syrian situation — unlike those who indulge in propaganda — that the most feasible settlement scenario is something along the lines of the famous Dayton Agreement for peace in Bosnia and Herzegovina (1995). Above all it would allow Syria to preserve its army and integrate the government and the opposition military formations into new armed forces. Numerous discussions with the Syrian opposition in Moscow prove that, in essence, their suggestions concerning the settlement boil down to the Bosnian model.

The Dayton Agreement provided for two administrative units: the Federation of Bosnia and Herzegovina, and the Serb Republic (Republika Srpska). The separation boundaries did not correspond to the front line as of the moment of cease-fire. Despite criticism that it would weaken the central power, the Dayton Agreement proved key to settling the conflict: The sides committed themselves to ensuring security in their territories and preserving the civil law-enforcement bodies, and pledged to send all foreigners, including advisers and volunteers, out of the country.

In Bosnia, military formations were integrated in two stages: first Muslims and Croats created joint military forces, and only then were they joined by Serbs. Eventually, by 2006, three armies had merged into one with three infantry brigades at its core and every brigade had a Muslim, Croatian and Serb battalion.

As for a Syrian version of the Dayton Agreement, which would integrate military formations into one army not exceeding 150,000 troops, the integration should be implemented in several stages. For instance, first, groups of militants and opposition would unite into corps to consolidate the maximum of armed people, then these corps are to be reduced to the necessary numbers. The redundant fighters could be transferred to civilian positions to help restore the destroyed infrastructure. It seems expedient that one corps be created at the Turkish buffer zone. The Bosnian plan of building the national army could be used to integrate the Southern Front rebel alliance and the Syrian Democratic Forces (SDF, which includes the Kurdish People's Protection Units, or YPG), thus contributing to ethnic and confessional diversity rather than sectarian division.

However, right after the cease-fire it would also be reasonable to create a special military council of 20 to 30 people. Under international supervision, it could become a platform for talks and negotiations between the commanders of the regime and their counterparts from the opposition.

This military council could also contribute to political reform, as it could be used as both a watchdog authority and “bench strength” for the key defense and law-enforcement positions. For example, the post of the defense minister could go to the regime candidate, while the chief of general staff could become someone from the opposition. That would balance the situation. The question about the nature of the reform — should it be military or political — is to be discussed by thinkers, but there are at least two arguments in favor of the first priority being a military council.

First, in today's Syria, security is a critical issue. It is complicated by confrontation with the radicals’ troops, which will likely try to wreck the agreement by any means. It is also compounded by the necessity of ensuring the security of the population in the opposition-controlled territories relying on local councils.

Second, the agendas for the Astana and Geneva meetings prove that it will take years to agree on political platforms, while the issues of cease-fire, amnesty and forming delegations can be dealt with today.

Integrating the regime and opposition armed forces will only be viable after a series of political reforms. This two-year process must be put in sync with forming the transitional government. Otherwise, we may see another case of the Tajikistan scenario of 1997, when President Emomali Rahmon kept the office while the army and the opposition failed to unite.

Another problem to be discussed is how to integrate the US-supported Kurdish YPG groups, which demonstrate a strong separatist sentiment and are not to be easily disarmed in the presence of the American contingent in Syrian Kurdistan. One could regard the formation of another corps, which should by all means include various formations of the SDF, where at least 23,000 are Arabs. The Arab participation should be real and not for show, and the YPG and Kurdistan Workers Party (PKK) symbols should be abandoned.

Therefore, Moscow believes that after the liberation of Raqqa and Deir ez-Zor from IS, Americans are unlikely to give up on their presence in northern Syria. However, Moscow can benefit from the US presence if the formation of the united military forces is supervised by the four countries: Russia (Syria's west), Turkey (the northwest), the United States (the northeast) and Jordan (the south). Largely, these steps would reduce Iran’s influence, which cannot be allowed on the Syrian-Iraqi border, where IS is most likely to return.

It’s not news that in Syria, trust is in short supply. Who can guarantee that the militants will not go on the offensive? Who can guarantee the opposition won’t end up in prison as soon as they disarm? The credibility issues are connected with the pressure on Damascus, and in the Astana format, Russia may show readiness to make compromises. However, there is a big question of how to pull Assad outside the settlement framework. The Kremlin has not yet found the answer, or maybe it has not been looking hard enough.