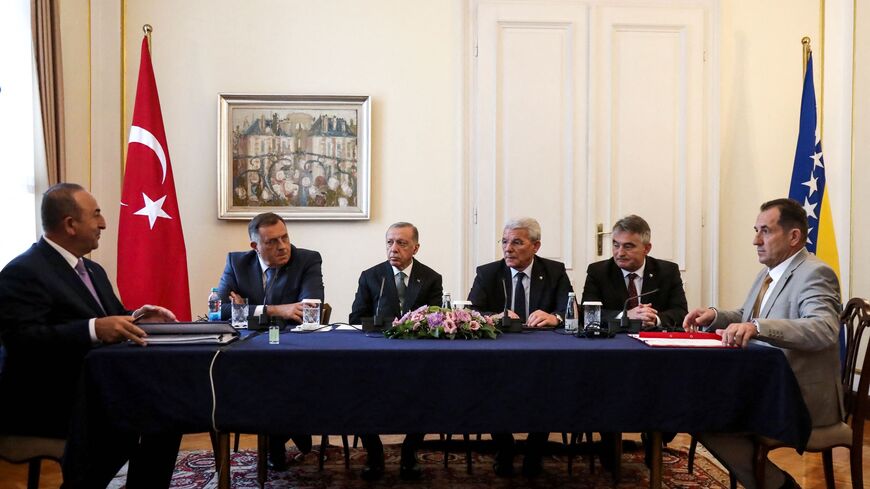 ISTANBUL — Turkish President Recep Tayyip Erdogan set off on a three-day Balkans tour on Tuesday to try to mediate a crisis that threatens fresh conflict among former Yugoslav states.

Erdogan’s first stop was in Bosnia and Herzegovina, where politicians from the Serb-dominated Republika Srpska — one of two political entities that make up the country — have made calls from the enclave to run its own affairs and form an army.

Led by Milorad Dodik, the pro-Kremlin Serb member of Bosnia’s tripartite presidency, the country’s Serbs have complained they are marginalized by Muslim Bosniaks, who form the largest ethnic group.

Dodik’s stance has led to the paralysis of many government functions and raised fears of the breakup of Bosnia. The country has been split between a Bosniak-Croat federation and Republika Srpska since 1995, following a sectarian war that left some 100,000 dead in the wake of Yugoslavia’s collapse.

Bosnia faces elections on Oct. 2 that will decide the makeup of the presidency as well as national, regional and cantonal governments.

Speaking in Ankara before his flight to Sarajevo, Erdogan stressed Turkey’s reputation in a region in which it has historic ties.

“Our country’s balanced and fair attitude is appreciated by all peoples in this geography,” he told a news conference at Esenboga Airport. “We will continue this stance in the coming period as well. The main agenda of my visit will be the efforts to resolve the political crisis in Bosnia and Herzegovina, which has been going on for more than a year. In all my contacts, I will point out that the territory of Bosnia and Herzegovina is of vital importance for the peace and stability of the Balkans. I will emphasize our support for its integrity and sovereignty.”

Turkey's strong bonds with the western Balkans were formed after the Ottoman conquest of the 15th and 16th centuries, spreading Islam to the region. More recently, Turkey was one of the first countries to recognize Bosnian independence in 1992 and established diplomatic relations the same year.

Trade between Turkey and Bosnia reached $695 million in 2020 and Turkish businesses are heavily invested in the country, particularly in the construction sector. Turkish builders have assisted in the reconstruction of historic mosques destroyed during the war, such as the Bascarsija Mosque in Sarajevo.

Turkey is also heavily involved in building and financing a highway between Sarajevo and Belgrade. “This project is a peace project that connects not only the countries of the region but also the peoples,” Erdogan said in the Bosnian capital.

Erdogan’s recent role in securing the successful Ukraine grain deal, which allows for the shipment of agricultural supplies held up by the Russian invasion, has further embellished his reputation as a potential mediator.

“The stance that Ankara took and is taking in the Ukrainian crisis — cooperating with Moscow in many areas, trying to ease the situation but also to play a positive role – is something that can be very beneficial for the Balkans,” he said.

Referring to Serbian nationalist calls for a union of the former Yugoslavian lands occupied by Serbs, including Bosnia’s Republika Srpska, Mulaosmanovic added, “With the invasion of Ukraine by Russian forces, Greater Serbia voices were raised and they’re talking about the de-Nazification of the Balkans, which was the narrative of Moscow in February. But the mediatory position of Ankara will be respected by Belgrade and the Greater Serbia politicians. They will understand the position of Ankara and the need to ease tensions and damp down the heavy narrative we’ve seen in the last month or so. I believe in that positive role in the Balkans for Ankara and President Erdogan because in the context of Ukraine, we see that Ankara is trying to save the possibility of peace.”

Erdogan will follow his visit to Sarajevo with trips to Belgrade and Zagreb, where he will work to ease tensions between the three states.

While in Serbia, he is also likely to address the recent spat with Kosovo, where Ankara also has close relations. A dispute over identity documents between Belgrade and Pristina in July led to protests in parts of northern Kosovo, where ethnic Serbs are in the majority.

“This perspective from Ankara on the political tensions and developments in the Balkans, and especially in our country, Bosnia-Herzegovina, is crucial for the next period, particularly the elections in October,” Mulaosmanovic said.