Erdogan's Bosnia rally message to Europe ahead of snap polls

Having thousands of Turks from the Balkans and Europe converge on the Bosnian capital for an election rally could be a risky move for President Recep Tayyip Erdogan. 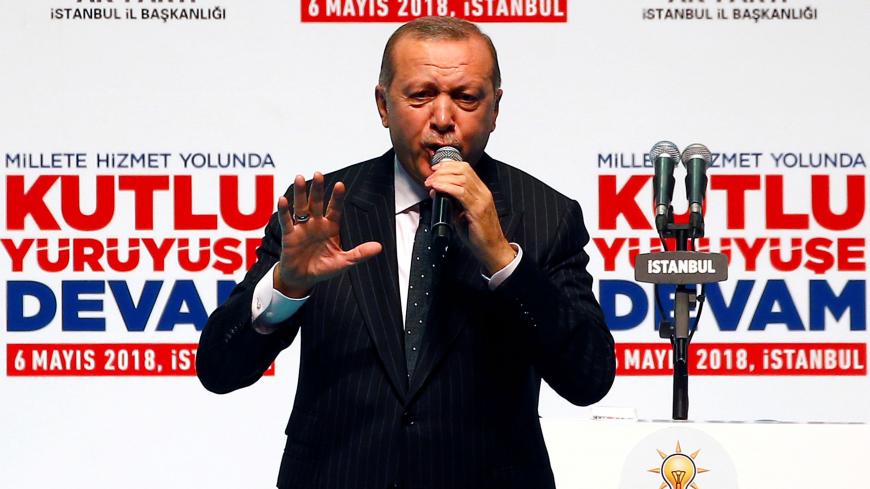 Having been barred by European countries with large Turkish communities from staging political rallies ahead of Turkey’s snap elections on June 24, President Recep Tayyip Erdogan has chosen the Bosnian capital of Sarajevo to address thousands of supporters from across Europe.

His speech in Sarajevo on May 20 will also be an act of political defiance against Austria, Germany and the Netherlands, which refused to allow him to campaign on their soil.

During his campaign for last year’s controversial constitutional referendum, Erdogan had accused the leaders of these countries of behaving like Nazis after he and members of his Justice and Development Party (AKP) were prevented from canvassing Turks there.

In that referendum, expatriate Turks in Europe voted overwhelmingly for constitutional changes that empowered Erdogan even more. Many argue that by preventing him from reaching out to Turks in Europe, these countries had actually contributed to this result.

Recalling last year’s crisis, the three countries in question acted early this time and declared that Turkish politicians would not be welcome to campaign for the June 24 elections. Given past experience, this ban may also work to Erdogan's advantage.

Erdogan revealed recently that alternative plans were underway for reaching out to his supporters in Europe, but he refused to name a venue. He finally revealed this last week while flying back from an official visit to South Korea, telling reporters on his plane that his rally would take place in Sarajevo.

Local press reports indicated, however, that neither the Bosnian Ministry for Foreign Affairs nor the Bosnian Presidency was aware of such a rally.

These reports said this would be a joint event by the AKP and the conservative Party of Democratic Action (PDA), led by Bakir Izetbegovic — the Bosniak member of the tripartite Presidency of Bosnia and Herzegovina — who is close to Erdogan.

Meanwhile, the planned rally has already caused controversy among not just Bosnian Serb politicians, but also among some Bosniak politicians who say this reveals the influence Turkey has over their country.

They also argue that the AKP-PDA rally is designed not just to serve Erdogan’s political interests but also Izetbegovic's interests, and they accuse Ankara of meddling in the country’s political affairs.

Sadik Ahmetovic, a former PDA vice president who now acts with the Independent Bloc, said he opposes this rally because Bosnia must remain focused on its “permanent goal” of joining the European Union.

“Given that some very important EU countries refused to host Erdogan's pre-election rally, I think that [Bosnia and Herzegovina] should do the same. … If he is a real friend of the country, he will understand this position," Ahmetovic told the Independent Balkan News Agency (IBNA).

Ahmetovic said Erdogan’s rally showed Turkey’s influence in his country, which “posed a barrier” to its EU membership bid.

In his remarks to the IBNA, Radovan Kovacevic, the spokesman for the Alliance of Independent Social Democrats in Republika Srpska, one of the two constitutional entities that make up Bosnia and Herzegovina, said Erdogan’s rally was “unacceptable” for them “because it shows that Turkey sees Bosnia as its satellite.

“How is it possible that Bosniak politicians in Sarajevo are disturbed by the fact that, for example, some Russian politician comes on a visit to Banja Luka [Republika Srpska's capital], but not to hold a political gathering, while at the same time they are involved in organizing Erdogan's political rally?" Kovacevic asked.

Slobodan Soja, a former Bosnian diplomat, believes that Bosnia represents a “great political arena for Turkey,” in contrast to Serbia and other regional countries, which, he said, are Turkey’s economic arenas. “We should think about that,” Soja said in remarks to the Bosnian press.

Suha Umar, a former Turkish ambassador to Belgrade who is now retired, pointed out that ethnic and religious sensitivities, especially where Turkey is involved, remain high in the Balkans.

Umar recalled the outrage Erdogan caused in Serbia in 2013, after his “Kosovo is Turkey, and Turkey is Kosovo” remark in an address in Prizren. Belgrade was only assuaged after Ankara said Erdogan’s words had been misinterpreted.

“Holding a rally in Bosnia where thousands of Turks from the Balkans and Europe are expected to converge is highly risky,” Umar told Al-Monitor.

“Turkey’s credit in Bosnia over issues like secularism is not as high as some think, and certain remarks by Erdogan while there could make a difficult situation worse,” he warned.

“The impression of cooperating politically with Turkey could also pose problems for Bosniaks, who are the weakest link in the three components that make up Bosnia and Herzegovina,” Umar said.

An example of the problems Turkey’s burgeoning regional influence can cause was seen in Kosovo in March when a government crisis erupted after six Turks were “rendered” to Turkey for being members of the so-called Fethullah Gulen Terror Organization (FETO) — the group Ankara accuses of carrying out the attempted coup against Erdogan in July 2016.

The Turkish intelligence agency MIT and its counterpart in Kosovo, without the knowledge of Prime Minister Ramush Haradinaj, reportedly organized the transfer.

Haradinaj fired the head of the Kosovo Intelligence Agency and the interior minister for deporting the Turks without his knowledge, only to be dressed down by Erdogan.

“On whose orders did you take this step? Since when have you started to protect those who are trying to carry out a coup against the Republic of Turkey,” Erdogan said.

He also reminded Haradinaj that Turkey was the first country to recognize Kosovo’s independence from Serbia.

Haldun Koc, Turkey’s ambassador in Sarajevo, tried to calm the situation by attempting to portray Erdogan’s visit on May 20 as a regular event. He said it was planned for June but moved to May because of Turkey’s elections.

“We see this visit as a working visit that should be focused on topics such as economy, trade, investment and further cooperation between the two countries,” Koc said.

The pro-Erdogan media in Turkey, however, is presenting the Sarajevo rally as a major coup against European countries that banned Erdogan from campaigning on their soil.

Meanwhile, another example of Turkey’s increasing influence in the Balkans was provided by the visit of Serbia’s President Aleksandar Vucic to Ankara this week.

Despite their differences over Kosovo and sensitivities regarding Bosnia, Ankara and Belgrade have been working to increase ties in recent years.

"There will be no more burning bridges,” Vucic declared during his meeting with Turkish parliamentary Speaker Ismail Kahraman.

Addressing a joint press conference with Erdogan after their official talks in Ankara, Vucic said Turkey was the biggest power and strongest Balkan country.

“What Turkey says is important,” he added. “If people in other countries see Turkey just politically and not in the field of investment, there’s nothing more I can say here,” he said.

Erdogan said some in the West could not bear Turkey’s developing ties in the Balkans and stressed that Ankara’s efforts in this regard would continue unabated.

Turkey’s influence in parts of the Balkans appears set to remain for now. It’s wrong, however, to assume that Ankara will always get what it wants.

Following the “rendering” affair in Kosovo, a Bosnian court dismissed a request in April for the extradition to Turkey of a female asylum-seeker sought by Ankara for alleged FETO links. Trends such as these, once developed, can be expected to continue.

The Balkans continue to be a region Ankara has to tread cautiously for reasons that go back centuries and for the realities that govern it today.