Road ahead unclear in aftermath of Tehran attacks

After having thwarted numerous plots to strike Iran, the country has finally been hit by its first Islamic State attack; the question now is what Iran may do next. 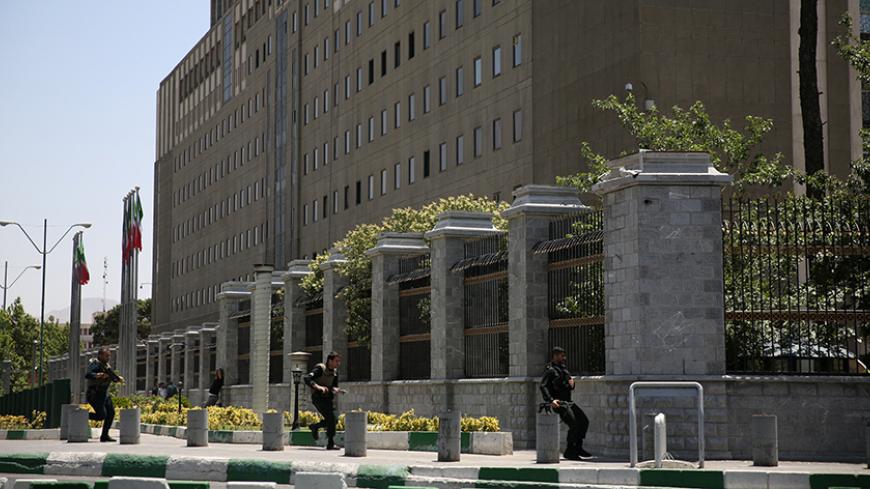 Members of Iranian forces run during a gunmen attack at the parliament's building in central Tehran, Iran, June 7, 2017. - TIMA via REUTERS

To ordinary Iranians, the threat of the Islamic State (IS) was never close enough to be thought of as a real concern — until June 7, when the group hit two monumental locations in the capital city of Tehran: the parliament and the tomb of the late founder of the Islamic Republic, Ayatollah Ruhollah Khomeini. The attacks were a shock — a wound deep enough to leave a clear scar. The big questions in the aftermath that need to be answered are how they happened — and what will come next.

On Oct. 24, Al-Monitor wrote about Iran’s new challenge: IS in Persia. This was prompted by the killing of Abu Aisha al-Kurdi, who was supposed to be appointed as the emir of the group in Iran. Back then, the country’s Intelligence Minister Mahmoud Alavi told state TV that the operation took place in Kermanshah province and resulted in the dismantling of an IS cell. Since then, Iranian authorities announced on several occasions the arrest of terrorist groups.

“They’ve been trying to hit [Iran] for a long time. They failed on several occasions as cooperation between different branches of the state helped secure the country. Yet this time they made it,” an Iranian security source told Al-Monitor on condition of anonymity. The source explained that the attacks were carefully planned; the locations chosen to convey a message. He added, “If it wasn’t for the rapid intervention of the security and military forces, the number of casualties could have been far more than it is now. Yet it is important to say that this attack isn’t going to be left without a response — a real response to the real terrorists, those who incited, planned and financed [the attacks]. They know well that Iran knows how to preserve its citizens’ security.”

From the first moments of the attacks, Saudi Arabia was linked to the incidents by many members of the Iranian political and security elites. The Islamic Revolutionary Guard Corps (IRGC) did not explicitly name the kingdom, yet in a statement following the attacks linked them directly to the recent Riyadh summit, saying it came “one week after a joint meeting between the president of the United States and the heads of a reactionary regional government [Saudi Arabia] — that has continuously supported takfiri terrorists.” The statement noted that the IRGC views the latter “as very meaningful and believes the claiming of responsibility [for the attack] by IS [further] indicates their hand in this brute measure.”

In contrast, Alavi was careful not to jump to conclusions, saying, “It is too early to judge whether Saudi Arabia had any role in the terrorist attack.” Alavi, however, did accuse Saudi Arabia of supporting terrorist groups in Iraq and Syria.

To Iran, this is a clear breach of the rules of the game that has put the whole region at the brink of a very dark abyss. The Iranian security source explained that such attacks are read well by Tehran as part of the proxy war some states are waging with the aim to respond to their failures in Iraq, Syria and Yemen during the past five years, “Name calling isn’t important; the fact is that Iran knows well that such attacks are desperate attempts to pressure Iran and the people of Iran. But for us, it is the other way round; this proves the righteousness of our choices from the beginning. If Iran hadn't fought off these monsters [in the region], they would have come here a long time ago.”

There are concerns in Tehran that other attempts by sleeper cells to target different areas in Iran might take place. The Iranian security source told Al-Monitor, “It’s obvious that security measures are going to be tightened — this is for the benefit of the nation. But the most important thing is that nothing can defeat this danger like unity among our people.” When asked about how Iran could respond to such attacks, the security source said, “The perpetrators are going to feel the response when it happens, that’s the most important thing. They crossed the red lines, and this means that everyone could cross red lines. Iran is always keen to see this whole region safe and calm, but there are those who always want to export their blood culture.”

The question is thus what Iran may do next. The simultaneous attacks on Iran’s parliament and the shrine of Ayatollah Khomeini have a dangerous significance; they meant clearly that the attackers have a good command and control on the ground, and that they were able to communicate and survey both points on at least two or three occasions before the assigned day of the attack. This raises the stakes for Iranian security services, which adopted tight measures both before and during the recent elections on May 19. Yet it seems that after the elections, these measures were loosened, allowing the attackers to take advantage of whatever minimal gap to jump in and execute their operation.

Another important — and dangerous — point to consider is that the attackers were Iranian. This means that the group was established on the ground, and despite the killing of their leader a year ago, was capable of continuing its work. Hence, most likely, another leader of "IS in Persia" appears to have been appointed — and is already doing his job.